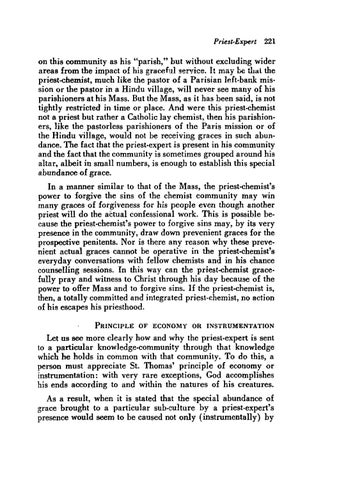 on this community as his &quot;parish,&quot; but without excluding wider areas from the impact of his graceful service. It may be thal the priest-chemist, much like the pastor of a Parisian left-bank mission or the pastor in a Hindu village, will never see many of his parishioners at his Mass. But the Mass, as it has been said, is not tightly restricted in time or place. And were this priest-chemist not a priest but rather a Catholic lay chemist, then his parishioners, like the pastorless parishioners of the Paris mission or of the Hindu village, would not be receiving graces in such abundance. The fact that the priest-expert is present in his community and the fact that the community is sometimes grouped around his altar, albeit in small numbers, is enough to establish this special abundance of grace. In a manner similar to that of the Mass, the priest-chemist&#39;s power to forgive the sins of the chemist community may win many graces of forgiveness for his people even though another priest will do the actual confessional work. This is possible because the priest-chemist&#39;s power to forgive sins may, by its very presence in the community, draw down prevenient graces for the prospective penitents. Nor is there any reason why these preveÂˇ nient actual graces cannot be operative in the priest-chemist&#39;s everyday conversations with fellow chemists and in his chance counselling sessions. In this way can the priest-chemist graceÂˇ fully pray and witness to Christ through his day because of the power to offer Mass and to forgive sins. If the priest-chemist is, then, a totally committed and integrated priest-chemist, no action of his escapes his priesthood. PRINCIPLE OF ECONOMY OR INSTRUMENTATION

Let us see more clearly how and why the priest-expert is sent to a particular knowledge-community through that knowledge which he holds in common with that community. To do this, a person must appreciate St. Thomas&#39; principle of economy or instrumentation: with very rare exceptions, God accomplishes his ends according to and within the natures of his creatures. As a result, when it is stated that the special abundance of grace brought to a particular sub-culture by a priest-expert&#39;s presence would seem to be caused not only (instrumentally) by