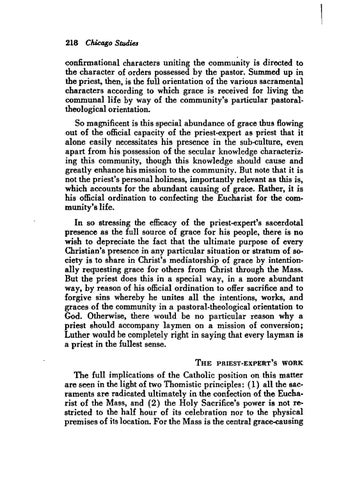 confirmational characters uniting the comm~ity is directed to the character of orders possessed by the pastor. Summed up in the priest, then, is the full orientation of the various sacramental characters according to which grace is received for living the communal life by way of the community&#39;s particnlar pastoralÂˇ theological orientation. So magnificent is this special abundance of grace thus flowing out of the official capacity of the priestÂˇexpert as priest that it alone easily necessitates his presence in the sub.culture, even apart from his possession of the secular knowledge characterizÂˇ ing this community, though this knowledge should cause and greatly enhance his mission to the community. But note that it is not the priest&#39;s personal holiness, importantly relevant as this is, which accounts for the abundant causing of grace. Rather, it is his official ordination to confecting the Eucharist for the community&#39;s life. In so stressing the efficacy of the priest-expert&#39;s sacerdotal presence as the full source of grace for his people, there is no wish to depreciate the fact that the ultimate purpose of every Christian&#39;s presence in any particular situation or stratum of society is to share in Christ&#39;s mediatorship of grace by intentionally requesting grace for others from Christ through the Mass. But the priest does this in a special way, in a more abundant way, by reason of his official ordination to offer sacrifice and to forgive sins whereby he unites all the intentions, works, and graces of the community in a pastoral-theological orientation to God. Otherwise, there would be no particular reason why a priest should accompany Iaymen on a mission of conversion; Luther wonld be completely right in saying that every layman is a priest in the fullest sense. THE PRIEST-EXPERT&#39;s WORK

The full implications of the Catholic position on this matter are seen in the light of two Thomistic principles: (1) all the sacraments are radicated nltimately in the confection of the Eucharist of the Mass, and (2) the Holy Sacrifice&#39;s power is not restricted to the half hour of its celebration nor to the physical premises of its location. For the Mass is the central grace.causing