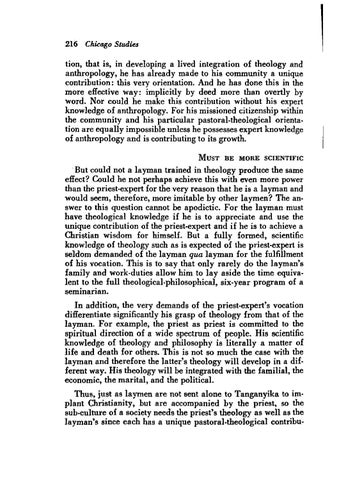 tion, that is, in developing a lived integration of theology and anthropology, he has already made to his community a unique contribution: this very orientation. And he has done this in the more effective way: implicitly by deed more than overtly by word. Nor could he make this contribution without his expert knowledge of anthropology. For his missioned citizenship within the community and his particUlar pastoral-theological orientation are equally impossible unless he possesses expert knowledge of anthropology and is contributing to its growth. MUST BE MORE SCIENTIFIC

ÂˇBut could not a layman trained in theology produce the same effect? CoUld he not perhaps achieve this with even more power than the priest-expert for the very reason that he is a layman and would seem, therefore, more imitable by other laymen? The answer to this question cannot be apodictic. For the layman must have theological knowledge if he is to appreciate and use the unique contribution of the priest-expert and if he is to achieve a Christian wisdom for himself. But a fUlly formed, scientific knowledge of theology such as is expected of the priest-expert is seldom demanded of the layman qua layman for the fUlfillment of his vocation. This is to say that only rarely do the layman&#39;s family and work-duties allow him to lay aside the time equivalent to the full theological-philosophical, six-year program of a seminarian. In addition, the very demands of the priest-expert&#39;s vocation differentiate significantly his grasp of theology from that of the layman. For example, the priest as priest is committed to the spiritual direction of a wide spectrum of people. His scientific knowledge of theology and philosophy is literally a matter of life and death for others. This is not so much the case with the layman and therefore the latter&#39;s theology will develop in a different way. His theology will he integrated with the familial, the economic, the marital, and the political. Thus, just as laymen are not sent alone to Tanganyika to implant Christianity, but are accompanied by the priest, so the sub-culture of a society needs the priest&#39;s theology as well as the layman&#39;s since each has a unique pastoral-theological contribu-