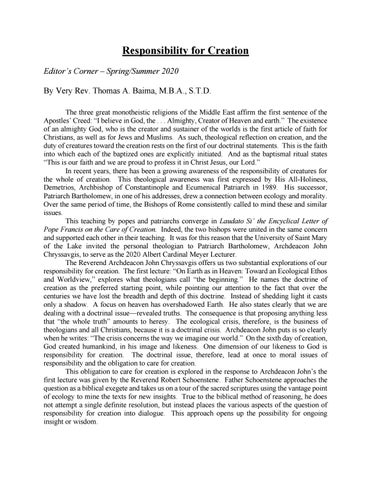 Responsibility for Creation Editor’s Corner – Spring/Summer 2020 By Very Rev. Thomas A. Baima, M.B.A., S.T.D. The three great monotheistic religions of the Middle East affirm the first sentence of the Apostles’ Creed: “I believe in God, the . . . Almighty, Creator of Heaven and earth.” The existence of an almighty God, who is the creator and sustainer of the worlds is the first article of faith for Christians, as well as for Jews and Muslims. As such, theological reflection on creation, and the duty of creatures toward the creation rests on the first of our doctrinal statements. This is the faith into which each of the baptized ones are explicitly initiated. And as the baptismal ritual states “This is our faith and we are proud to profess it in Christ Jesus, our Lord.” In recent years, there has been a growing awareness of the responsibility of creatures for the whole of creation. This theological awareness was first expressed by His All-Holiness, Demetrios, Archbishop of Constantinople and Ecumenical Patriarch in 1989. His successor, Patriarch Bartholomew, in one of his addresses, drew a connection between ecology and morality. Over the same period of time, the Bishops of Rome consistently called to mind these and similar issues. This teaching by popes and patriarchs converge in Laudato Si’ the Encyclical Letter of Pope Francis on the Care of Creation. Indeed, the two bishops were united in the same concern and supported each other in their teaching. It was for this reason that the University of Saint Mary of the Lake invited the personal theologian to Patriarch Bartholomew, Archdeacon John Chryssavgis, to serve as the 2020 Albert Cardinal Meyer Lecturer. The Reverend Archdeacon John Chryssavgis offers us two substantial explorations of our responsibility for creation. The first lecture: “On Earth as in Heaven: Toward an Ecological Ethos and Worldview,” explores what theologians call “the beginning.” He names the doctrine of creation as the preferred starting point, while pointing our attention to the fact that over the centuries we have lost the breadth and depth of this doctrine. Instead of shedding light it casts only a shadow. A focus on heaven has overshadowed Earth. He also states clearly that we are dealing with a doctrinal issue—revealed truths. The consequence is that proposing anything less that “the whole truth” amounts to heresy. The ecological crisis, therefore, is the business of theologians and all Christians, because it is a doctrinal crisis. Archdeacon John puts is so clearly when he writes: “The crisis concerns the way we imagine our world.” On the sixth day of creation, God created humankind, in his image and likeness. One dimension of our likeness to God is responsibility for creation. The doctrinal issue, therefore, lead at once to moral issues of responsibility and the obligation to care for creation. This obligation to care for creation is explored in the response to Archdeacon John’s the first lecture was given by the Reverend Robert Schoenstene. Father Schoenstene approaches the question as a biblical exegete and takes us on a tour of the sacred scriptures using the vantage point of ecology to mine the texts for new insights. True to the biblical method of reasoning, he does not attempt a single definite resolution, but instead places the various aspects of the question of responsibility for creation into dialogue. This approach opens up the possibility for ongoing insight or wisdom.