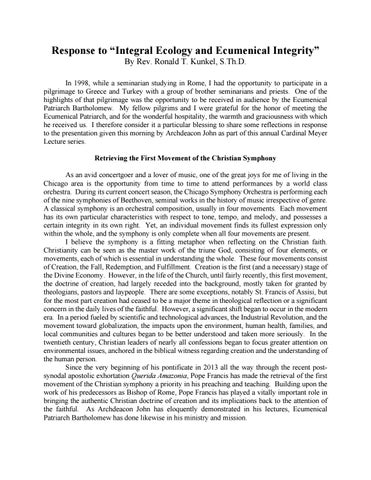 Response to “Integral Ecology and Ecumenical Integrity” By Rev. Ronald T. Kunkel, S.Th.D. In 1998, while a seminarian studying in Rome, I had the opportunity to participate in a pilgrimage to Greece and Turkey with a group of brother seminarians and priests. One of the highlights of that pilgrimage was the opportunity to be received in audience by the Ecumenical Patriarch Bartholomew. My fellow pilgrims and I were grateful for the honor of meeting the Ecumenical Patriarch, and for the wonderful hospitality, the warmth and graciousness with which he received us. I therefore consider it a particular blessing to share some reflections in response to the presentation given this morning by Archdeacon John as part of this annual Cardinal Meyer Lecture series. Retrieving the First Movement of the Christian Symphony As an avid concertgoer and a lover of music, one of the great joys for me of living in the Chicago area is the opportunity from time to time to attend performances by a world class orchestra. During its current concert season, the Chicago Symphony Orchestra is performing each of the nine symphonies of Beethoven, seminal works in the history of music irrespective of genre. A classical symphony is an orchestral composition, usually in four movements. Each movement has its own particular characteristics with respect to tone, tempo, and melody, and possesses a certain integrity in its own right. Yet, an individual movement finds its fullest expression only within the whole, and the symphony is only complete when all four movements are present. I believe the symphony is a fitting metaphor when reflecting on the Christian faith. Christianity can be seen as the master work of the triune God, consisting of four elements, or movements, each of which is essential in understanding the whole. These four movements consist of Creation, the Fall, Redemption, and Fulfillment. Creation is the first (and a necessary) stage of the Divine Economy. However, in the life of the Church, until fairly recently, this first movement, the doctrine of creation, had largely receded into the background, mostly taken for granted by theologians, pastors and laypeople. There are some exceptions, notably St. Francis of Assisi, but for the most part creation had ceased to be a major theme in theological reflection or a significant concern in the daily lives of the faithful. However, a significant shift began to occur in the modern era. In a period fueled by scientific and technological advances, the Industrial Revolution, and the movement toward globalization, the impacts upon the environment, human health, families, and local communities and cultures began to be better understood and taken more seriously. In the twentieth century, Christian leaders of nearly all confessions began to focus greater attention on environmental issues, anchored in the biblical witness regarding creation and the understanding of the human person. Since the very beginning of his pontificate in 2013 all the way through the recent postsynodal apostolic exhortation Querida Amazonia, Pope Francis has made the retrieval of the first movement of the Christian symphony a priority in his preaching and teaching. Building upon the work of his predecessors as Bishop of Rome, Pope Francis has played a vitally important role in bringing the authentic Christian doctrine of creation and its implications back to the attention of the faithful. As Archdeacon John has eloquently demonstrated in his lectures, Ecumenical Patriarch Bartholomew has done likewise in his ministry and mission.