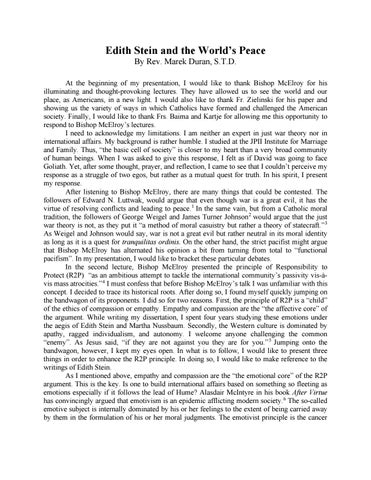 Edith Stein and the World’s Peace By Rev. Marek Duran, S.T.D. At the beginning of my presentation, I would like to thank Bishop McElroy for his illuminating and thought-provoking lectures. They have allowed us to see the world and our place, as Americans, in a new light. I would also like to thank Fr. Zielinski for his paper and showing us the variety of ways in which Catholics have formed and challenged the American society. Finally, I would like to thank Frs. Baima and Kartje for allowing me this opportunity to respond to Bishop McElroy’s lectures. I need to acknowledge my limitations. I am neither an expert in just war theory nor in international affairs. My background is rather humble. I studied at the JPII Institute for Marriage and Family. Thus, “the basic cell of society” is closer to my heart than a very broad community of human beings. When I was asked to give this response, I felt as if David was going to face Goliath. Yet, after some thought, prayer, and reflection, I came to see that I couldn’t perceive my response as a struggle of two egos, but rather as a mutual quest for truth. In his spirit, I present my response. After listening to Bishop McElroy, there are many things that could be contested. The followers of Edward N. Luttwak, would argue that even though war is a great evil, it has the virtue of resolving conflicts and leading to peace. 1 In the same vain, but from a Catholic moral tradition, the followers of George Weigel and James Turner Johnson 2 would argue that the just war theory is not, as they put it “a method of moral casuistry but rather a theory of statecraft.” 3 As Weigel and Johnson would say, war is not a great evil but rather neutral in its moral identity as long as it is a quest for tranquilitas ordinis. On the other hand, the strict pacifist might argue that Bishop McElroy has alternated his opinion a bit from turning from total to “functional pacifism”. In my presentation, I would like to bracket these particular debates. In the second lecture, Bishop McElroy presented the principle of Responsibility to Protect (R2P) “as an ambitious attempt to tackle the international community’s passivity vis-àvis mass atrocities.” 4 I must confess that before Bishop McElroy’s talk I was unfamiliar with this concept. I decided to trace its historical roots. After doing so, I found myself quickly jumping on the bandwagon of its proponents. I did so for two reasons. First, the principle of R2P is a “child” of the ethics of compassion or empathy. Empathy and compassion are the “the affective core” of the argument. While writing my dissertation, I spent four years studying these emotions under the aegis of Edith Stein and Martha Nussbaum. Secondly, the Western culture is dominated by apathy, ragged individualism, and autonomy. I welcome anyone challenging the common “enemy”. As Jesus said, “if they are not against you they are for you.” 5 Jumping onto the bandwagon, however, I kept my eyes open. In what is to follow, I would like to present three things in order to enhance the R2P principle. In doing so, I would like to make reference to the writings of Edith Stein. As I mentioned above, empathy and compassion are the “the emotional core” of the R2P argument. This is the key. Is one to build international affairs based on something so fleeting as emotions especially if it follows the lead of Hume? Alasdair McIntyre in his book After Virtue has convincingly argued that emotivism is an epidemic afflicting modern society. 6 The so-called emotive subject is internally dominated by his or her feelings to the extent of being carried away by them in the formulation of his or her moral judgments. The emotivist principle is the cancer