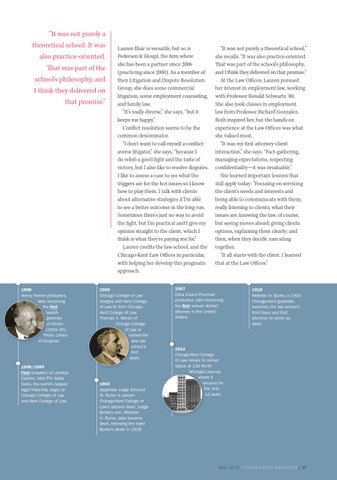 “It was not purely a theoretical school. It was also practice-oriented. That was part of the school’s philosophy, and I think they delivered on that promise.”

Lauren Blair is versatile, but so is Pedersen &amp; Houpt, the firm where she has been a partner since 2006 (practicing since 2000). As a member of their Litigation and Dispute Resolution Group, she does some commercial litigation, some employment counseling, and family law. “It’s really diverse,” she says, “but it keeps me happy.” Conflict resolution seems to be the common denominator. “I don’t want to call myself a conflictaverse litigator,” she says, “because I do relish a good fight and the taste of victory, but I also like to resolve disputes. I like to assess a case to see what the triggers are for the hot issues so I know how to play them. I talk with clients about alternative strategies if I’m able to see a better outcome in the long run. Sometimes there’s just no way to avoid the fight, but I’m practical and I give my opinion straight to the client, which I think is what they’re paying me for.” Lauren credits the law school, and the Chicago-Kent Law Offices in particular, with helping her develop this pragmatic approach.

“It was not purely a theoretical school,” she recalls. “It was also practice-oriented. That was part of the school’s philosophy, and I think they delivered on that promise.” At the Law Offices, Lauren pursued her interest in employment law, working with Professor Ronald Schwartz ’80. She also took classes in employment law from Professor Richard Gonzalez. Both inspired her, but the hands-on experience at the Law Offices was what she valued most. “It was my first attorney-client interaction,” she says. “Fact-gathering, managing expectations, respecting confidentiality—it was invaluable.” She learned important lessons that still apply today: “Focusing on servicing the client’s needs and interests and being able to communicate with them; really listening to clients, what their issues are; knowing the law, of course, but seeing moves ahead; giving clients options, explaining them clearly; and then, when they decide, executing together. “It all starts with the client. I learned that at the Law Offices.”

1912 Chicago-Kent College of Law moves to rented space at 116 North Michigan Avenue, where it remains for the next 12 years. 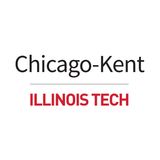 More from Chicago-Kent College of Law