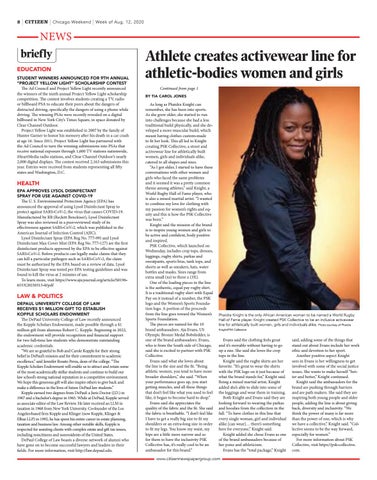 NEWS briefly EDUCATION STUDENT WINNERS ANNOUNCED FOR 9TH ANNUAL “PROJECT YELLOW LIGHT” SCHOLARSHIP CONTEST The Ad Council and Project Yellow Light recently announced the winners of the ninth annual Project Yellow Light scholarship competition. The contest involves students creating a TV, radio or billboard PSA to educate their peers about the dangers of distracted driving, specifically the dangers of using a phone while driving. The winning PSAs were recently revealed on a digital billboard in New York City’s Times Square, in space donated by Clear Channel Outdoor. Project Yellow Light was established in 2007 by the family of Hunter Garner to honor his memory after his death in a car crash at age 16. Since 2011, Project Yellow Light has partnered with the Ad Council to turn the winning submissions into PSAs that receive national exposure through 1,600 TV stations nationwide, iHeartMedia radio stations, and Clear Channel Outdoor’s nearly 2,000 digital displays. The contest received 2,163 submissions this year. Entries were received from students representing all fifty states and Washington, D.C.

DEPAUL UNIVERSITY COLLEGE OF LAW RECEIVES $1 MILLION GIFT TO ESTABLISH KOPPLE SCHOLARS ENDOWMENT The DePaul University College of Law recently announced the Kopple Scholars Endowment, made possible through a $1 million gift from alumnus Robert C. Kopple. Beginning in 2022, the endowment will provide recognition and financial support for two full-time law students who demonstrate outstanding academic credentials. “We are so grateful to Bob and Carole Kopple for their strong belief in DePaul’s mission and for their commitment to academic excellence,” said Jennifer Rosato Perea, dean of the college. “The Kopple Scholars Endowment will enable us to attract and retain some of the most academically stellar students and continue to build our law school’s strong national reputation in a competitive environment. We hope this generous gift will also inspire others to give back and make a difference in the lives of future DePaul law students.” Kopple earned two degrees from DePaul: a Juris Doctor (J.D.) in 1967 and a bachelor’s degree in 1965. While at DePaul, Kopple served as associate editor of the Law Review. He later received an LLM in taxation in 1968 from New York University. Co-founder of the Los Angeles-based firm Kopple and Klinger (now Kopple, Klinger &amp; Elbaz LLP) in 1992, he has spent his entire career in estate planning, taxation and business law. Among other notable skills, Kopple is respected for assisting clients with complex estate and gift tax issues, including noncitizens and nonresidents of the United States. DePaul College of Law boasts a diverse network of alumni who have gone on to become successful lawyers and leaders in their fields. For more information, visit http://law.depaul.edu.

As long as Phaidra Knight can remember, she has been into sports. As she grew older, she started to run into challenges because she had a less traditional build physically, and she developed a more muscular build, which meant having clothes custom-made to fit her look. This all led to Knight creating PSK Collective, a street and activewear line for athletically built women, girls and individuals alike, catered to all shapes and sizes. “As I got older, I started to have these conversations with other women and girls who faced the same problems and it seemed it was a pretty common theme among athletes,” said Knight, a World Rugby Hall of Fame player, who is also a mixed martial artist. “I wanted to combine my love for clothing with my passion for women’s rights and equity and this is how the PSK Collective was born.” Knight said the mission of the brand is to inspire young women and girls to be active and confident, body positive and inspired. PSK Collective, which launched on Wednesday, includes crop tops, dresses, leggings, rugby shirts, parkas and sweatpants, sports bras, tank tops, and shorts as well as sneakers, hats, water bottles and masks. Sizes range from extra small (xs) to three x (3X). One of the leading pieces in the line is the authentic, equal pay rugby shirt. It is a traditional rugby shirt with Equal Pay on it instead of a number, the PSK logo and the Women’s Sports Foundation logo. A portion of the proceeds from the line goes toward the Women’s Sports Foundation. The pieces are named for the 10 brand ambassadors. Aja Evans, US Olympic Bronze Medal Bobsledder, is one of the brand ambassadors. Evans, who is from the South side of Chicago, said she is excited to partner with PSK Collective. Evans said what she loves about the line is the size and the fit. “Being athletic women, you tend to have more broader shoulders,” she said. “When your performance goes up, you start getting muscles, and all these things that don’t feel like what you used to feel like, it began to become hard to shop.” Evans said she appreciates the quality of the fabric and the fit. She said the fabric is breathable. “I don’t feel like I have to get a really big size to fit my shoulders or an extra-long size in order to fit my legs. You know my waist, my hips are a little more narrow and so for them to have the inclusivity PSK Collective has, it’s really cool to be an ambassador for this brand.”

Phaidra Knight is the only African American woman to be named a World Rugby Hall of Fame player. Knight created PSK Collective to be an inclusive activewear line for athletically built women, girls and individuals alike. Photo courtesy of Phaidra Knight/PSK Collective

Evans said the clothing feels great and it’s movable without having to go up a size. She said she loves the crop tops in the line. Knight said the rugby shirts are her favorite. “It’s great to wear the shirts with the PSK logo on it just because of what the brand stands for,” Knight said. Being a mixed martial artist, Knight added she’s able to slide into some of the leggings and wear them in training. Both Knight and Evans said they are looking forward to wearing the parkas and hoodies from the collection in the fall. “To have clothes in this line that every single woman, girl and individual alike [can wear]… there’s something here for everyone,” Knight said. Knight added she chose Evans as one of the brand ambassadors because of her poise and athleticism. Evans has the “total package,” Knight

said, adding some of the things that stand out about Evans include her work ethic and devotion to her sport. Another positive aspect Knight sees in Evans is her willingness to get involved with some of the social justice issues. She wants to make herself “better and better,” Knight continued. Knight said the ambassadors for the brand are pushing through barriers and are path makers. She said they are inspiring both young people and older people, adding the line is about giving back, diversity and inclusivity. “We think the power of many is far more than the power of one, which is why we have a collective,” Knight said. “Collective seems to be the way forward, especially for women.” For more information about PSK Collective, visit https://psk-collective. com. 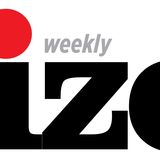