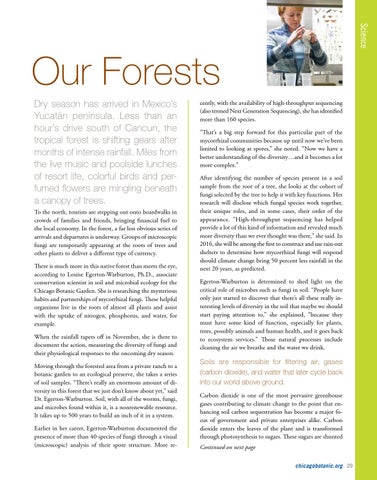 Our Forests Dry season has arrived in Mexico’s Yucatán peninsula. Less than an hour’s drive south of Cancun, the tropical forest is shifting gears after months of intense rainfall. Miles from the live music and poolside lunches of resort life, colorful birds and perfumed flowers are mingling beneath a canopy of trees. To the north, tourists are stepping out onto boardwalks in crowds of families and friends, bringing financial fuel to the local economy. In the forest, a far less obvious series of arrivals and departures is underway. Groups of microscopic fungi are temporarily appearing at the roots of trees and other plants to deliver a different type of currency. There is much more in this native forest than meets the eye, according to Louise Egerton-Warburton, Ph.D., associate conservation scientist in soil and microbial ecology for the Chicago Botanic Garden. She is researching the mysterious habits and partnerships of mycorrhizal fungi. These helpful organisms live in the roots of almost all plants and assist with the uptake of nitrogen, phosphorus, and water, for example. When the rainfall tapers off in November, she is there to document the action, measuring the diversity of fungi and their physiological responses to the oncoming dry season. Moving through the forested area from a private ranch to a botanic garden to an ecological preserve, she takes a series of soil samples. “There’s really an enormous amount of diversity in this forest that we just don’t know about yet,” said Dr. Egerton-Warburton. Soil, with all of the worms, fungi, and microbes found within it, is a nonrenewable resource. It takes up to 500 years to build an inch of it in a system. Earlier in her career, Egerton-Warburton documented the presence of more than 40 species of fungi through a visual (microscopic) analysis of their spore structure. More re-

cently, with the availability of high-throughput sequencing (also termed Next Generation Sequencing), she has identified more than 160 species. “That’s a big step forward for this particular part of the mycorrhizal communities because up until now we’ve been limited to looking at spores,” she noted. “Now we have a better understanding of the diversity…and it becomes a lot more complex.” After identifying the number of species present in a soil sample from the root of a tree, she looks at the cohort of fungi selected by the tree to help it with key functions. Her research will disclose which fungal species work together, their unique roles, and in some cases, their order of the appearance. “High-throughput sequencing has helped provide a lot of this kind of information and revealed much more diversity than we ever thought was there,” she said. In 2016, she will be among the first to construct and use rain-out shelters to determine how mycorrhizal fungi will respond should climate change bring 50 percent less rainfall in the next 20 years, as predicted. Egerton-Warburton is determined to shed light on the critical role of microbes such as fungi in soil. “People have only just started to discover that there’s all these really interesting levels of diversity in the soil that maybe we should start paying attention to,” she explained, “because they must have some kind of function, especially for plants, trees, possibly animals and human health, and it goes back to ecosystem services.” Those natural processes include cleaning the air we breathe and the water we drink.

Soils are responsible for filtering air, gases (carbon dioxide), and water that later cycle back into our world above ground. Carbon dioxide is one of the most pervasive greenhouse gases contributing to climate change to the point that enhancing soil carbon sequestration has become a major focus of government and private enterprises alike. Carbon dioxide enters the leaves of the plant and is transformed through photosynthesis to sugars. These sugars are shunted Continued on next page chicagobotanic.org 29 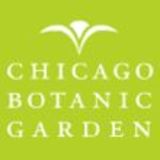 Member Magazine and Program Guide for the Chicago Botanic Garden

Member Magazine and Program Guide for the Chicago Botanic Garden