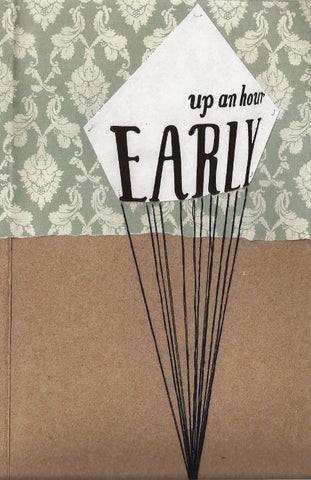 smiled. I’m Mariana, by the way, she said. Yeah, he laughed, pointing to her name clipped to her shirt. I’m Rick. Rick drew her name onto the side of the Fifth Street corner store a few days later. The large swooping letters were amazingly vibrant in their white and yellow smear. He was vibrant standing by it. Must be another Mariana she said to the people on the street hustling for gossip on the scene. It wasn’t long until the power washers came again. That wall was never clear of paint although the city always tried. On her way to work she watched them cleanse her name away with a secret little guilty smile. On the door of the shop she found a little yellow post-it that morning, flapping in the breeze, straining to retain its sticky hold. On it was written: Guess that wasn’t permanent enough. Mariana was married to the tattoo artist at the age of twenty years and two days. Her dress was a long cream gown found in the back of her grandmother’s closet, but the old woman could not recall ever having worn the thing before. It hardly fit her, belt and all; it was too large. Our wedding pictures will last forever, Rick warned, when she brought the matter to him. Our permanence is in our promise, she said to him. He had it tattooed on his forearm on their honeymoon. One cool day in winter, five years past the long cream gown, six years past the bench and sketchbook, Mariana became the tattoo artist’s widow. The people of the area let the street be quiet; no one walked about as usual, but peered out from their balconies to watch as she brought one by one, the plants from her shop through the tattoo parlor’s doors, until her store was empty, and the parlor full. She covered the walls with postit notes, reading: Permanent enough? And someone heard her swearing up and down she’d never cluck her tongue again. They talked about her going crazy. They didn’t understand her mourning. They didn’t understand her dealing with her grief. A neighbor stopped her when he saw her start to drag a hose from out of the door of her truck. I have to wash the walls, she cried. She wished her arms were covered in the ink he’d offered time and time again to etch into them. It would hurt too much, and last too long, she’d said. She hadn’t understood the permanence of absence yet. 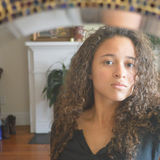 Up An Hour Early

The same handmade booklet with the final, previously missing page edited in.

Up An Hour Early

The same handmade booklet with the final, previously missing page edited in.