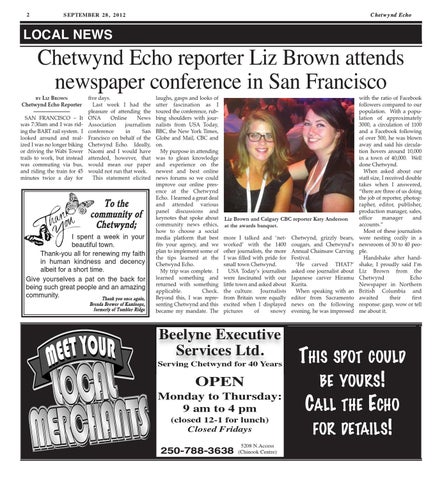 five days. Last week I had the pleasure of attending the ONA Online News journalism Association conference in San Francisco on behalf of the Chetwynd Echo. Ideally, Naomi and I would have attended, however, that would mean our paper would not run that week. This statement elicited

To the community of Chetwynd;

I spent a week in your beautiful town. Thank-you all for renewing my faith in human kindness and decency albeit for a short time. Give yourselves a pat on the back for being such great people and an amazing community. Thank you once again, Brenda Brewer of Kamloops, formerly of Tumbler Ridge

laughs, gasps and looks of utter fascination as I toured the conference, rubbing shoulders with journalists from USA Today, BBC, the New York Times, Globe and Mail, CBC and on. My purpose in attending was to glean knowledge and experience on the newest and best online news forums so we could improve our online presence at the Chetwynd Echo. I learned a great deal and attended various panel discussions and keynotes that spoke about community news ethics, how to choose a social media platform that best fits your agency, and we plan to implement some of the tips learned at the Chetwynd Echo. My trip was complete. I learned something and returned with something applicable. Check. Beyond this, I was representing Chetwynd and this became my mandate. The

more I talked and â&#x20AC;&#x2DC;networkedâ&#x20AC;&#x2122; with the 1400 other journalists, the more I was filled with pride for small town Chetwynd. USA Todayâ&#x20AC;&#x2122;s journalists were fascinated with our little town and asked about the culture. Journalists from Britain were equally excited when I displayed pictures of snowy

Chetwynd, grizzly bears, cougars, and Chetwyndâ&#x20AC;&#x2122;s Annual Chainsaw Carving Festival. â&#x20AC;&#x2DC;He carved THAT?â&#x20AC;&#x2122; asked one journalist about Japanese carver Hiramu Kurita. When speaking with an editor from Sacramento news on the following evening, he was impressed

with the ratio of Facebook followers compared to our population. With a population of approximately 3000, a circulation of 1100 and a Facebook following of over 500, he was blown away and said his circulation hovers around 10,000 in a town of 40,000. Well done Chetwynd. When asked about our staff size, I received double takes when I answered, â&#x20AC;&#x153;there are three of us doing the job of reporter, photographer, editor, publisher, production manager, sales, office manager and accounts.â&#x20AC;? Most of these journalists were nesting cozily in a newsroom of 30 to 40 people. Handshake after handshake, I proudly said Iâ&#x20AC;&#x2122;m Liz Brown from the Chetwynd Echo Newspaper in Northern British Columbia and awaited their first response: gasp, wow or tell me about it.