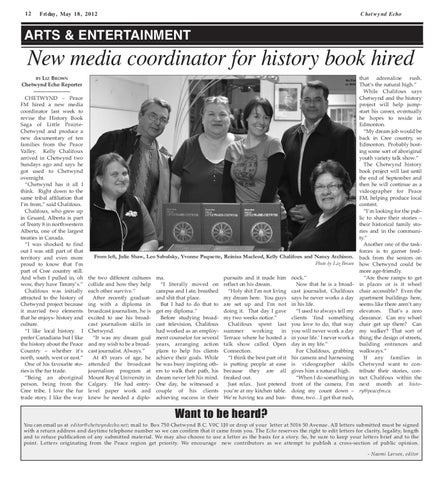 BY LIZ BROWN Chetwynd Echo Reporter –––––––––––––– CHETWYND – Peace FM hired a new media coordinator last week to revise the History Book Saga of Little PrairieChetwynd and produce a new documentary of ten families from the Peace Valley. Kelly Chalifoux arrived in Chetwynd two Sundays ago and says he got used to Chetwynd overnight. “Chetwynd has it all I think. Right down to the same tribal affiliation that I’m from,” said Chalifoux. Chalifoux, who grew up in Gruard, Alberta is part of Treaty 8 in northwestern Alberta, one of the largest treaties in Canada. “I was shocked to find out I was still part of that territory and even more proud to know that I’m part of Cree country still. And when I pulled in, oh wow, they have Timmy’s.” Chalifoux was initially attracted to the history of Chetwynd project because it married two elements that he enjoys- history and culture. “I like local history. I prefer Canadiana but I like the history about the Peace Country – whether it’s north, south, west or east.” One of his favourite stories is the fur trade. “Being an aboriginal person, being from the Cree tribe, I love the fur trade story. I like the way

From left, Julie Shaw, Leo Sabulsky, Yvonne Paquette, Reinisa Macleod, Kelly Chalifoux and Nancy Atchison. Photo by Liz Brown the two different cultures collide and how they help each other survive.” After recently graduating with a diploma in broadcast journalism, he is excited to use his broadcast journalism skills in Chetwynd. “It was my dream goal and my wish to be a broadcast journalist. Always.” At 45 years of age, he attended the broadcast journalism program at Mount Royal University in Calgary. He had entrylevel paper work and knew he needed a diplo-

ma. “I literally moved on campus and I ate, breathed and shit that place. But I had to do that to get my diploma.” Before studying broadcast television, Chalifoux had worked as an employment counselor for several years, arranging action plans to help his clients achieve their goals. While he was busy inspiring others to walk their path, his dream never left his mind. One day, he witnessed a couple of his clients achieving success in their

pursuits and it made him reflect on his dream. “Holy shit I’m not living my dream here. You guys are set up and I’m not doing it. That day I gave my two weeks notice.” Chalifoux spent last summer working in Terrace where he hosted a talk show called Open Connection. “I think the best part of it is putting people at ease because they are all freaked out. Just relax. Just pretend you’re at my kitchen table. We’re having tea and ban-

Want to be heard?

nock.” Now that he is a broadcast journalist, Chalifoux says he never works a day in his life. “I used to always tell my clients ‘find something you love to do, that way you will never work a day in your life.’ I never work a day in my life.” For Chalifoux, grabbing his camera and harnessing is videographer skills gives him a natural high. “When I do something in front of the camera, I’m doing my count down – three, two…I get that rush,

that adrenaline rush. That’s the natural high.” While Chalifoux says Chetwynd and the history project will help jumpstart his career, eventually he hopes to reside in Edmonton. “My dream job would be back in Cree country, so Edmonton. Probably hosting some sort of aboriginal youth variety talk show.” The Chetwynd history book project will last until the end of September and then he will continue as a videographer for Peace FM, helping produce local content. “I’m looking for the public to share their stories – their historical family stories and in the community.” Another one of the taskforces is to garner feedback from the seniors on how Chetwynd could be more age-friendly. “Are there ramps to get in places or is it wheel chair accessible? Even the apartment buildings here, seems like there aren’t any elevators. That’s a zero clearance. Can my wheel chair get up there? Can my walker? That sort of thing; the design of streets, building entrances and walkways.” If any families in Chetwynd want to contribute their stories, contact Chalifoux within the next month at history@peacefm.ca.

You can email us at editor@chetwyndecho.net; mail to Box 750 Chetwynd B.C. V0C 1J0 or drop of your letter at 5016 50 Avenue. All letters submitted must be signed with a return address and daytime telephone number so we can confirm that it came from you. The Echo reserves the right to edit letters for clarity, legality, length and to refuse publication of any submitted material. We may also choose to use a letter as the basis for a story. So, be sure to keep your letters brief and to the point. Letters originating from the Peace region get priority. We encourage new contributors as we attempt to publish a cross-section of public opinion. - Naomi Larsen, editor