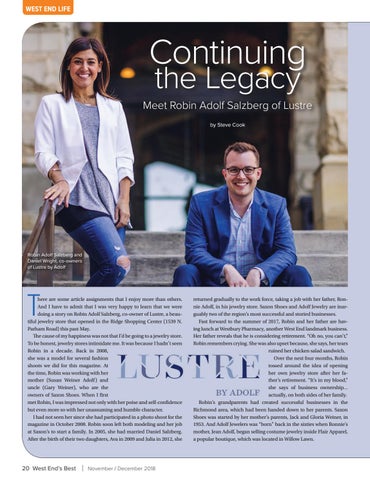 here are some article assignments that I enjoy more than others. And I have to admit that I was very happy to learn that we were doing a story on Robin Adolf Salzberg, co-owner of Lustre, a beautiful jewelry store that opened in the Ridge Shopping Center (1539 N. Parham Road) this past May. The cause of my happiness was not that I’d be going to a jewelry store. To be honest, jewelry stores intimidate me. It was because I hadn’t seen Robin in a decade. Back in 2008, she was a model for several fashion shoots we did for this magazine. At the time, Robin was working with her mother (Susan Weiner Adolf) and uncle (Gary Weiner), who are the owners of Saxon Shoes. When I first met Robin, I was impressed not only with her poise and self-confidence but even more so with her unassuming and humble character. I had not seen her since she had participated in a photo shoot for the magazine in October 2008. Robin soon left both modeling and her job at Saxon’s to start a family. In 2005, she had married Daniel Salzberg. After the birth of their two daughters, Ava in 2009 and Julia in 2012, she

returned gradually to the work force, taking a job with her father, Ronnie Adolf, in his jewelry store. Saxon Shoes and Adolf Jewelry are inarguably two of the region’s most successful and storied businesses. Fast forward to the summer of 2017, Robin and her father are having lunch at Westbury Pharmacy, another West End landmark business. Her father reveals that he is considering retirement. “Oh no, you can’t,” Robin remembers crying. She was also upset because, she says, her tears ruined her chicken salad sandwich. Over the next four months, Robin tossed around the idea of opening her own jewelry store after her father’s retirement. “It’s in my blood,” she says of business ownership… actually, on both sides of her family. Robin’s grandparents had created successful businesses in the Richmond area, which had been handed down to her parents. Saxon Shoes was started by her mother’s parents, Jack and Gloria Weiner, in 1953. And Adolf Jewelers was “born” back in the sixties when Ronnie’s mother, Jean Adolf, began selling costume jewelry inside Flair Apparel, a popular boutique, which was located in Willow Lawn. 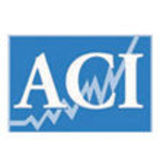