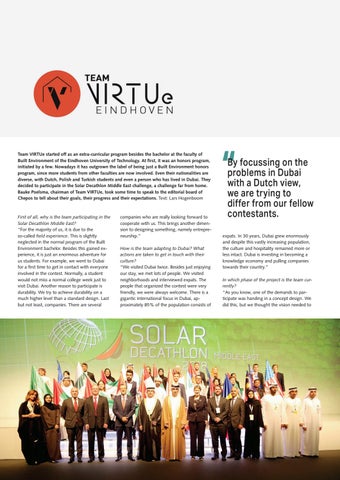 Team VIRTUe started off as an extra-curricular program besides the bachelor at the faculty of Built Environment of the Eindhoven University of Technology. At first, it was an honors program, initiated by a few. Nowadays it has outgrown the label of being just a Built Environment honors program, since more students from other faculties are now involved. Even their nationalities are diverse, with Dutch, Polish and Turkish students and even a person who has lived in Dubai. They decided to participate in the Solar Decathlon Middle East challenge, a challenge far from home. Bauke Poelsma, chairman of Team VIRTUe, took some time to speak to the editorial board of Chepos to tell about their goals, their progress and their expectations. Text: Lars Hogenboom

First of all, why is the team participating in the Solar Decathlon Middle East? “For the majority of us, it is due to the so-called field experience. This is slightly neglected in the normal program of the Built Environment bachelor. Besides this gained experience, it is just an enormous adventure for us students. For example, we went to Dubai for a first time to get in contact with everyone involved in the contest. Normally, a student would not miss a normal college week just to visit Dubai. Another reason to participate is durability. We try to achieve durability on a much higher level than a standard design. Last but not least, companies. There are several

companies who are really looking forward to cooperate with us. This brings another dimension to designing something, namely entrepreneurship.” How is the team adapting to Dubai? What actions are taken to get in touch with their culture? “We visited Dubai twice. Besides just enjoying our stay, we met lots of people. We visited neighborhoods and interviewed expats. The people that organized the contest were very friendly, we were always welcome. There is a gigantic international focus in Dubai, approximately 85% of the population consists of

By focussing on the problems in Dubai with a Dutch view, we are trying to differ from our fellow contestants. expats. In 30 years, Dubai grew enormously and despite this vastly increasing population, the culture and hospitality remained more or less intact. Dubai is investing in becoming a knowledge economy and pulling companies towards their country.” In which phase of the project is the team currently? “As you know, one of the demands to participate was handing in a concept design. We did this, but we thought the vision needed to

On Thursday March 23st, Chepos 56 was launched after a succesful lunch event about the main topic of the magazine, Plastics. The magazine discusses their chemical build-up, the type of esthetics that is associated with the material and many other aspects. Some of the other subjects that are discussed are the development plans for the Central Station area in Utrecht, the architecture of Hugh Maaskant's Bunker and the crazy design of architecture websites. 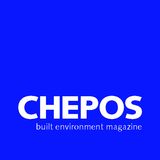