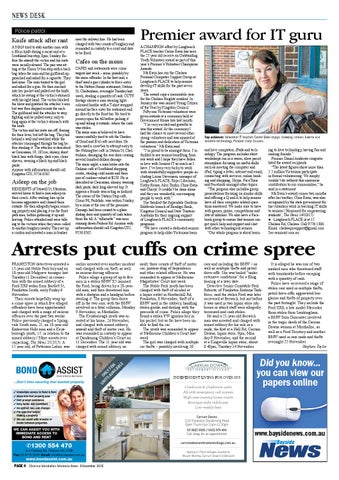 Knife attack after rant A MAN tried to stab another man with a 30cm knife during a racist rant at a Southland bus stop, 8pm, Sunday. Before the assault the victim and his mate were racially abused. The pair was sitting at the Karen St bus stop with a back bag when the man and his girlfriend approached and asked for a cigarette. They had none. The man turned to the girl and asked for a gun. He then reached into her pocket and pulled out the knife, which he swung at the victim’s stomach with his right hand. The victim blocked the blow and grabbed the attacker’s arm but was then slapped across the neck. The girlfriend told the attacker to stop fighting and he pulled away, only to lung again at the victim’s stomach with the knife. The victim and his mate ran off, fearing for their lives, but left the bag. They hid behind a wall and watched while the attacker rummaged through the bag before stealing it. The attacker is described as Caucasian, 19, 185cm, skinny, short black hair with fringe, dark eyes, clean shaven, wearing a black top and black pants. Anyone with information should call Kingston CIU, 9556 6565.

Asleep on the job RESIDENTS of Stawell St, Mentone, arrived home to find a man asleep on their couch. After waking him up he became aggressive and chased them outside. He then allegedly began removing property and placing it on the front path area, before gathering it up and leaving. Police attended and were talking to the victims when they were called to another burglary nearby. They set up a cordon and arrested a man in bushes

near the railway line. He has been charged with two counts of burglary and remanded in custody to a court and date to be fixed.

Cafes on the menu CAFES and restaurants were crime targets last week – some possibly by the same offender. In the first raid, a thief used a gas cylinder to force entry to the Hattori Hanzo restaurant, Station St, Cheltenham, overnight Tuesday last week, stealing a quantity of cash. CCTV footage shows a man wearing lightcoloured hoodie with a T-shirt wrapped around his face enter the restaurant and go directly to the front bar. He tried to jemmy open the till before picking it up and taking it outside, where the cash was stolen. The same man is believed to have unsuccessfully tried to rob the Garden of Good and Evil café next door. He then used a crow bar to attempt entry to the Nutmegtree café in Station St, Cheltenham, damaging the rear door causing several hundred dollars damage. The same night, a man broke into the Galiano café at Southland shopping centre, stealing cold meats and three jars of cookies valued at $250. He is described as Caucasian, skinny, wearing dark pants, dark long-sleeved top. It appears a female was acting as lookout. The owner of the Station Stop café, Como Pd, Parkdale, was woken Sunday by a noise at the rear of the premises. Damage had been caused to a glass sliding door and quantity of cash taken from the till. A “silhouette” was seen running down Parkers Rd. Anyone with information should call Kingston CIU, 9556 6565.

Premier award for IT guru A CHAMPION effort by Longbeach PLACE teacher Carrie Ewin has seen the 25 year old receive an Outstanding Youth Volunteer award as part of this year’s Premier’s Volunteer Champions Awards. Ms Ewin has run the Chelsea Personal Computer Support Group at Longbeach PLACE to help seniors develop IT skills for the past seven years. The award caps a memorable year for the Chelsea Heights resident. In January she was named Young Citizen of the Year by Kingston Council. Fifty one Victorian volunteers were given awards at a ceremony held at Government House late last month. “I’m very excited and grateful to win this award. At the ceremony I had the chance to meet several other young volunteers and was amazed at the passion and dedication of Victorian volunteers,” Ms Ewin said. “I’m proud to be amongst them. I’m thrilled to see seniors benefiting from our work and I hope they have fallen in love with Seniors IT as much as I have. I’ve been very lucky to work with wonderfully supportive people including Lorna Stevenson, manager of Longbeach PLACE, Rojer Liberman, Kathy Rouse, Alex Taylor, Chris Ewin and Cheryl. It couldn’t be done alone and they are wonderful, encouraging people to work with.” She thanked the Aspendale GardensEdithvale branch of Bendigo Bank, Kingston Council and State Trustees Australia for their ongoing support of Longbeach PLACE’s community programs. “We have created a dedicated seniors program to help older Victorians learn

and love computers, iPads and technology. The program includes short workshops run in a warm, slow paced atmosphere focusing on useful skills such as meeting the computer and iPad, typing a letter, internet and email, connecting with services, online banking and shopping, Skype, FaceTime and Facebook amongst other topics. “The program also includes group presentations focusing on similar skills and offering a Q and A to help seniors have all their computer related questions answered. We make sure to have with games, prizes, competitions and lots of nibblies. We also have a Facebook group to ensure that seniors can get quick help and support and chat with other technological seniors. “Our whole program is about learn-

ing to love technology, having fun and making friends.” Premier Daniel Andrews congratulated the award recipients. “The latest figures show more than 1.5 million Victorians participate in formal volunteering. We simply couldn’t do without this enormous contribution to our communities,” he said in a statement. Ms Ewin’s award comes two months after her brother, Chris Ewin, was also recognised by the state government for his voluntary work in teaching IT skills to seniors (‘Honoured for empowering students’, The News 14/10/15). n Longbeach PLACE is at 15 Chelsea Rd, Chelsea. Call 9776 1386. Email: chelseapcsupport@gmail.com See seniorsit.com.au

earlier arrested over another incident and charged with car theft, as well as serious driving offences. Police allege a group of up to five men in a stolen BMW X5 rammed the Ford, being driven by a 20-yearold man, and then threatened him with a shotgun and a handgun before stealing it. The group then drove off in the two cars, with the BMW involved in a fatal collision, Monday 9 November, in Mordialloc. The Keysborough youth was arrested at his home, 24 November, and charged with armed robbery, assault and theft of motor cars. He was remanded in custody to appear at Dandenong Children’s Court on 11 December. The 21 year old was charged with armed robbery, as-

FRANKSTON detectives arrested a 15-year-old Noble Park boy and an 18-year-old Mulgrave teenager last Tuesday (1 December) in connection with the armed robbery of a Ford XR8 sedan from Bartlett St, Frankston South, early Friday 6 November. Their arrests hopefully wrap up a crime spree in which five alleged offenders have been apprehended and charged with a range of serious offences over the past two weeks. Police previously charged a Springvale South man, 21, an 18-year-old Endeavour Hills man and a Keysborough youth, 17, in relation to the armed robbery (‘More arrests over carjacking, The News 2/12/15). A 15 year old, of Patterson Lakes, was

sault, three counts of theft of motor car, possess drug of dependence and other related offences. He was remanded to appear at Melbourne Magistrates’ Court last week. The Noble Park youth has been charged with theft of alcohol at a liquor outlet in Heatherhill Rd, Frankston, 8 November, theft of a BMW used in the robbery, handling stolen goods, and dealing with the proceeds of crime. Police allege they found a stolen VW ignition key in his pocket, but so far have been unable to find the car. The youth was remanded to appear at Melbourne Children’s Court last week. The girl was charged with multiple car thefts – possibly involving 20

cars and including the BMW – as well as multiple thefts and petrol drive-offs. She was bailed “under extensive conditions” for a filing hearing at a later date. Detective Senior Constable Paul Roberts, of Frankston Embona Taskforce, said the stolen Ford was later recovered at Berwick, but not before it was used in two liquor store robberies in which staff were allegedly terrorised and cash stolen. He said a 21-year-old Berwick man was arrested and charged with armed robbery for his role in a raids, the first at a Hall Rd, Carrum Downs, liquor store, 9pm, Monday 9 November, and the second at a Kingsville liquor store, about 8.40pm, Tuesday 24 November.

It is alleged he was one of two masked men who threatened staff with tomahawks before escaping with a quantity of cash. Police have recovered a range of stolen cars used in multiple thefts, petrol drive-offs, aggravated burglaries and thefts of property over the past fortnight. They include the Ford XR8, a late model Mercedes Benz stolen from Sandringham, a BMW from Doncaster involved in the tragic death of the Carrum Downs woman at Mordialloc, as well as a Ford Territory and another BMW used in ram raids and thefts overnight 25 November. Stephen Taylor