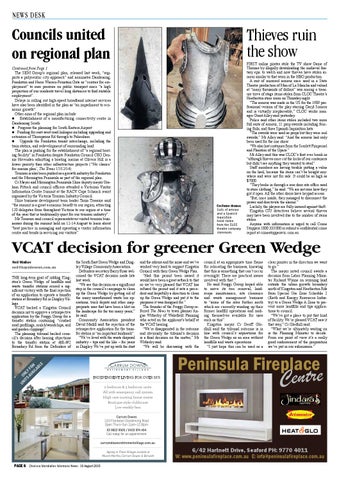 Continued from Page 1 The SEM Group’s regional plan, released last week, “supports a polycentric city approach” and nominates Dandenong, Frankston and Narre Warren-Fountain Gate as “centres for employment” to ease pressure on public transport since “a high proportion of our residents travel long distances to find suitable employment”. Delays in rolling out high-speed broadband internet services have also been identified in the plan as “an impediment to economic growth”. Other aims of the regional plan include: n Establishment of a manufacturing connectivity centre in Dandenong South n Progress the planning for South Eastern Airport n Funding for east-west road linkages including upgrading and extension of Thompsons Rd through to Pakenham n Upgrade the Frankston transit interchange, including the train station, and redevelopment of surrounding land The plan is pushing for the establishment of “a regional boating facility” in Frankston despite Frankston Council CEO Dennis Hovenden admitting a boating marina at Olivers Hill is a lower priority than other infrastructure projects (‘‘No chance’ for marina plan’, The Times 15/12/14). Tourism is also been pushed as a growth industry for Frankston and the Mornington Peninsula as part of the regional plan. Cr Mayer and Mornington Peninsula Shire deputy mayor Graham Pittock and council officers attended a Victorian Visitor Information Centre Summit at the RACV Cape Schanck resort organised by the Victoria Tourism Industry Council. Shire business development team leader Tania Treasure said “the summit is a great economic benefit to our region, attracting 120 delegates from throughout Victoria to our region at a time of the year that is traditionally quiet for our tourism industry”. Ms Treasure said council representatives visited tourism businesses during the summit held on 12-14 August to learn about “best practice in managing and operating a visitor information centre and trends in servicing our visitors”.

FIRST online pirates stole the TV show Game of Thrones by illegally downloading the midieval fantasy epic to watch and now thieves have stolen armour similar to that worn in the HBO production. A suit of mirrored armour once used in a State Theatre production of Man of La Mancha and valued at “many thousands of dollars” was among a treasure trove of stage items stolen from CLOC Theatre’s Heatherton store room on Thursday night. “The armour was made in the US for the 1989 professional version of the play starring Daryl Somers and is virtually irreplaceable,” CLOC works manager Grant Alley said yesterday. Police said other items stolen included two more full suits of armour, 11 prop swords including fencing foils, and three Spanish Inquisition hats. “The swords were used as props but they were real swords,” Mr Alley said. “And the armour had only been used for the one show. “We also lost costumes from the Scarlett Pimpernel and Phantom of the Opera.” Mr Alley said this was CLOC’s first ever break-in “although thieves once cut the locks of our containers but didn’t see anything they wanted to steal”. Staff members are having trouble putting a value on the haul, because the items can’t be bought anywhere and were not for sale. It could be as high as $7000. “They broke in through a rear door site office used to store clothing,” he said. “We are not sure how they got it open. All the other doors have keypad access. “But, once inside, they managed to disconnect the power and deactivate the alarms.” Luckily, the players are fully insured against theft. Kingston CIU detectives believe several thieves may have been involved due to the number of items stolen. Anyone with information is urged to call Crime Stoppers 1800 333 000 or submit a confidential crime report at crimestoppersvic.com.au

and the odours and the noise and we’ve worked very hard to support Kingston Council with their Green Wedge Plan. “Had this permit been issued it would have been a great setback to that so we’ve very pleased that VCAT has refused the permit and it sets a precedent and hopefully a direction to clean up the Green Wedge and put it to the purposes it was designed for.” The founder of the Froggi Group referred The News to town planner Angus Witherby of Wakefield Planning who acted on the applicant’s behalf at the VCAT hearing. “We’re disappointed in the outcome and obviously the tribunal’s decision is a final decision on the matter,” Mr Witherby said. “We will be discussing with the

the South East Green Wedge and Dingley Village Community Association. Defenders secretary Barry Ross welcomed the VCAT decision made late last week. “We see this decision as a significant step in the council’s campaign to clean up the Green Wedge by getting rid of the many unauthorised waste bin operations, truck depots and other inappropriate uses that have been a blot on the landscape for far too many years,” he said. Community Association president David Madill said the rejection of the retrospective application for the transfer station is “an important landmark”. “We’ve lived with the waste disposal industry – tips and the like – for years in Dingley. We’ve put up with the dust

council at an appropriate time frame for relocating the business, knowing that this is something that can’t occur overnight. There are practical issues involved with that.” He said Froggi Group hoped able to move its tree removal, landscape maintenance, site clearance and waste management business to “some of the sites further north which are currently winding up their former landfill operations and making themselves available for uses such as this”. Kingston mayor Cr Geoff Gledhill said the tribunal outcome is in line with council’s aspirations for the Green Wedge as an area without landfills and waste operations. “I just hope this can be used as a

clear pointer in the direction we want to go.” The mayor noted council awaits a decision from Labor Planning Minister Richard Wynne on rezoning land outside the urban growth boundary north of Kingston and Heatherton Rds from Special Use Zone Schedule 2 (Earth and Energy Resources Industry) to a Green Wedge A Zone to prevent more landfills and tips applications to council. “We’ve got a place to put that kind of facility. We’re pleased VCAT saw it that way,” Cr Gledhill said. “What we’re ultimately waiting on is the Planning Minister to decide. From our point of view it’s a really good endorsement of the proposition we’ve put in our submission.”