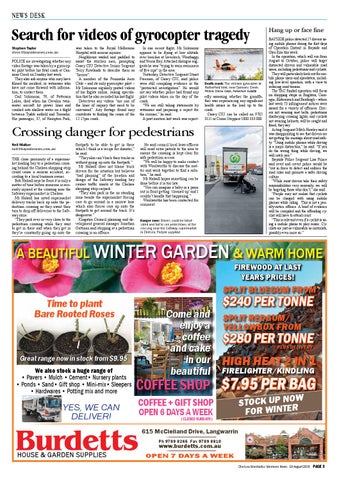 Search for videos of gyrocopter tragedy Stephen Taylor steve@baysidenews.com.au POLICE are investigating whether any video footage was taken by a gyrocopter pilot before his fatal crash at Cannons Creek on Sunday last week. They also ask anyone who may have filmed the incident, or witnesses who have not come forward with information, to contact them. Carl Solomons, 59, of Patterson Lakes, died when his Cavalon twinseater aircraft hit power lines and crashed into shallow water on a flight between Tyabb airfield and Tooradin. His passenger, 37, of Hampton Park,

In one recent flight, Mr Solomons appears to be flying at low altitude over beaches at Inverloch, Wonthaggi and Venus Bay. Attached dialogue suggests he was “trying to warn swimmers of five rips” in the area. Yesterday, Detective Sergeant Stuart Freeman, of Casey CIU, said police were still compiling evidence in the “protracted investigation”. He would not say whether police had found any pilot videos taken on the day of the crash. “We are still taking statements by witnesses and preparing a report for the coroner,” he said. A post mortem last week was report-

was taken to the Royal Melbourne Hospital with serious injuries. Neighbours waded and paddled to assist the stricken men, prompting Casey CIU Detective Senior Sergeant Terry Rowlands to describe them as “heroes”. A member of the Peninsula Aero Club – and its only gyrocopter pilot – Mr Solomons regularly posted videos of his flights online, raising speculation that he also recorded his last flight. Detectives say videos “are one of the lines of inquiry that need to be canvassed”. Any footage found may contribute to finding the cause of the 12.15pm crash.

edly assessing whether the grandfather was experiencing any significant health issues in the lead up to the crash. Casey CIU can be called on 9705 3111 or Crime Stoppers 1800 333 000.

He said council local laws officers will send extra patrols to the area to ensure the crossing is kept clear for safe pedestrian access. “We will be happy to make contact with Woolworths to discuss the matter and work together to find a solution,” he said. Mr Halsall hopes something can be done before it is too late. “You can imagine a baby in a pram out in front getting ‘cleaned up’ and I couldn’t handle that happening.” Woolworths has been contacted for comment.

footpath to be able to get in there which I think is a recipe for disaster,” he said. “They also can’t back their trucks in without going up onto the footpath.” Mr Halsall does not blame truck drivers for the situation but believes “bad planning” of the location and design of the Safeway loading bay causes traffic snarls at the Chelsea shopping strip carpark. “They also park in the no standing zone beside the supermarket forcing cars to go around in a narrow lane which also forces cars up onto the footpath to get around the truck. It’s dangerous.” Kingston Council planning and development general manager Jonathan Guttman said stopping at a pedestrian crossing is an offence.

Danger zone: Drivers could be blindsided and fail to see pedestrians at the crossing near the Safeway supermarket in Chelsea. Picture supplied

Hang up or face fine BAYSIDE police detected 27 drivers using mobile phones during the first days of Operation Distrait in Bayside and Glen Eira this week. In the operation, which will run from August to October, police will target distracted drivers and vulnerable road users, including pedestrians and cyclists. They will particularly look out for mobile phone users and speedsters, including low-level speeders, with a view to reducing road trauma. The TAC funded operation will focus on shopping strips in Brighton, Carnegie, Elsternwick and Bentleigh – where last week 73 infringement notices were issued for a variety of offences. Drivers not wearing seat belts, pedestrians disobeying crossing lights, and cyclists not wearing helmets, will be caught and fined, they say. Acting Sergeant Mitch Hawley said it was disappointing to see that drivers are not getting the message about road safety. “Using mobile phones while driving is a major distraction,” he said. “If you do the wrong thing while driving, we will catch you.” Bayside Police Sergeant Lisa Prince said overt and covert police would be “out in force to detect and enforce the road rules and promote a safer driving culture. “While most drivers take their safety responsibilities very seriously, we will be targeting those who don’t,” she said. “People may not realise that cyclists can be charged with using mobile phones while riding. This is not a penalty-notice offence. A brief of evidence will be compiled and the offending cyclist will have to attend court. “This is relevant even if a cyclist is using a mobile phone to play music. Cyclists are just as vulnerable as motorists, possibly even more so.”