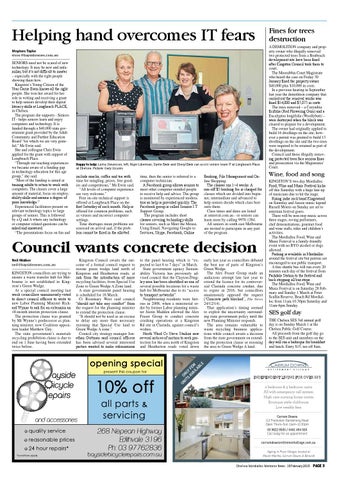 Fines for trees destruction A DEMOLITION company and property owner who illegally removed two protected trees from a Bonbeach development site have been fined after Kingston Council took them to court. The Moorabbin Court Magistrate who heard the case on Friday 30 January fined the property owner $40,000 plus $10,000 in costs. In a previous hearing in September last year the demolition company that carried out the removal works was fined $14,000 and $7,075 in costs. The trees removed – a Corymbia ficifolia (Red Flowering Gum) and a Eucalyptus longifolia (Woollybutt) – were destroyed when the block was cleared to prepare for a development. The owner had originally applied to build 16 dwellings on the site, however a permit was granted to build 13 dwellings on the site and the two trees were required to be retained as part of the development. Council said those illegally removing protected trees face serious fines and prosecution via the Magistrates’ Court.

Stephen Taylor steve@baysidenews.com.au SENIORS need not be scared of new technology. It may be new and unfamiliar, but it’s not difficult to master – especially with the right people showing them how. Kingston’s Young Citizen of the Year Carrie Ewin knows all the right people. She won her award for her role in writing and receiving a grant to help seniors develop their digital literacy skills at Longbeach PLACE, in Chelsea. The program she supports - Seniors IT - helps seniors learn and enjoy computers and technology. It is funded through a $40,000 state government grant provided by the Adult Community and Further Education Board “for which we are very grateful,” Ms Ewin said. She and colleague Chris Ewin applied for the grant with support of Longbeach Place. “Through our teaching experiences we became aware of a funding gap in technology education for this age group,” she said. “Most of the funding is aimed at training adults to return to work with computers. The classes cover a large amount of material, focus on employability skills and assume a degree of prior knowledge.” Experienced facilitators present on relevant technology topics to large groups of seniors. This is followed by a Q and A where any technology or computer related questions can be asked and answered. “The presentations focus on fun and

include snacks, coffee and tea with time for mingling, prizes, free goodies and competitions,” Ms Ewin said. “All levels of computer experience are very welcome.” Free on-site technical support is offered at Longbeach Place on the first Saturday of each month. Help is offered for common problems, such as viruses and incorrect computer settings. Time shortages mean problems are assessed on arrival and, if the problem cannot be fixed in the allotted

time, then the senior is referred to a computer technician. A Facebook group allows seniors to meet other computer-minded people to receive help and advice. The group is monitored by experienced moderators so help is provided quickly. The Facebook group is called Seniors I.T Support Group. The program includes short classes covering technology skills for seniors, such as Meet the Mouse, Using Email, Navigating Google to Services, Skype, Facebook, Online

Banking, File Management and Online Shopping. The classes run 1–4 weeks. A one-off $5 booking fee is charged for classes which are divided into beginner, intermediate and advanced to help seniors decide which class best suits them. Class times and dates are listed at seniorsit.com.au - or seniors can learn more by calling 9976 1384. All seniors in south east Melbourne are invited to participate in any part of the program.

to the panel hearing which is “expected to last 6 to 7 days” in March. State government agency Sustainability Victoria has previously advised council that the Clayton-Dingley area has been identified as one of several possible locations for a waste hub for Melbourne due to its “access to transport networks”. Neighbouring residents were furious in 2008, when a ministerial order by former Labor planning minister Justin Madden allowed the Alex Fraser Group to conduct concrete crushing operations at a Kingston Rd site in Clarinda, against council’s wishes. North Ward Cr Steve Staikos saw several notices of motion to seek protection for the area north of Kingston and Heatherton roads voted down

KINGSTON councillors are trying to ensure a waste transfer hub for Melbourne is not established in Kingston’s Green Wedge. At a special council meeting last week councillors unanimously voted to direct council officers to write to new Labor Planning Minister Richard Wynne to ask for an extension an 18-month interim protection clause. The protection clause was granted by Mr Wynne’s predecessor as planning minister, now Coalition opposition leader Matthew Guy. The state government’s materials recycling prohibition clause is due to end on 1 June having been extended twice before.

Kingston Council awaits the outcome of a formal council request to rezone green wedge land north of Kingston and Heatherton roads, at risk from the introduction of more recycling facilities, from Special Use Zone to Green Wedge A Zone land. A state government panel hearing is scheduled for 16 March. Cr Rosemary West said council “should not take any comfort” from the request for the planning minister to extend the protection clause. “It should not be used as an excuse to delay any more than necessary rezoning that Special Use land to Green Wedge A zone.” Council city strategy manager Jonathan Guttman said council officers has been advised several interested parties wanted to make submissions

early last year as councillors debated the best use of parts of Kingston’s Green Wedge. The Alex Fraser Group made an audacious attempt late last year to extend the licence for its controversial Clarinda concrete crusher, due to expire in 2016, but councillors unanimously opposed the request (‘Concrete path blocked’, The News 24/12/14). That application’s timing seemed to exploit the uncertainty surrounding state government policy until the new Planning Minister responds. The area remains vulnerable to waste recycling business applications while council awaits a decision from the state government on extending the protection clause or rezoning the area to Green Wedge A land.

KINGSTON’S two-day Mordialloc Food, Wine and Music Festival kicks off this Saturday with a huge line-up of musicians due to hit the stage. Rising indie rock band Kingswood on Saturday and Aussie music legend Russell Morris on Sunday are set to entertain festival goers. There will be non-stop music across three stages, roving performers, chef demonstrations, gourmet food and wine stalls, rides and children’s activities. The Mordialloc Food, Wine and Music Festival is a family-friendly event with no BYO alcohol or dogs allowed. Parking is available in Mordialloc around the festival site but patrons are encouraged to use public transport. A free shuttle bus will run every 20 minutes each day of the festival from Parkdale Station to the festival and back stopping all bus stops. The Mordialloc Food, Wine and Music Festival is on Saturday 28 February and Sunday 1 March at Peter Scullin Reserve, Beach Rd Mordialloc from 11am-10.30pm Saturday and 11am-6pm Sunday.

SES golf day THE Chelsea SES 3rd annual golf day is on Sunday March 1 at the Chelsea Public Golf Course. All proceeds from the golf day go to the SES unit and members on the day will run a barbeque for breakfast and lunch. Entry $15, tee-off 8am.