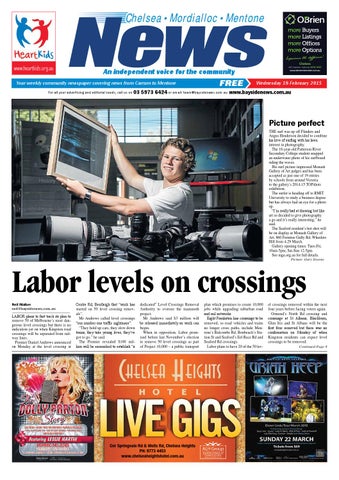 Picture perfect THE surf was up off Flinders and Angus Henderson decided to combine his love of surfing with his keen interest in photography. The 18-year-old Patterson River Secondary College student snapped an underwater photo of his surfboard riding the waves. His surf picture impressed Monash Gallery of Art judges and has been accepted as just one of 19 entries by schools from around Victoria to the gallery’s 2014-15 TOPshots exhibition. The surfer is heading off to RMIT University to study a business degree but has always had an eye for a photo op. “I’m really bad at drawing but like art so decided to give photography a go and it’s really interesting,” he said. The Seaford resident’s hot shot will be on display at Monash Gallery of Art, 860 Ferntree Gully Rd, Wheelers Hill from 4-29 March. Gallery opening times: Tues-Fri, 10am-5pm; Sat-Sun 12-5pm. See mga.org.au for full details. Picture: Gary Sissons

Labor levels on crossings Neil Walker neil@baysidenews.com.au LABOR plans to fast track its plan to remove 50 of Melbourne’s most dangerous level crossings but there is no indication yet on when Kingston road crossings will be separated from railway lines. Premier Daniel Andrews announced on Monday at the level crossing at

Centre Rd, Bentleigh that “work has started on 50 level crossing removals”. Mr Andrews called level crossings “our number one traffic nightmare”. “They hold up cars, they slow down trains, they take young lives, they’ve got to go,” he said. The Premier revealed $100 million will be earmarked to establish “a

dedicated” Level Crossings Removal Authority to oversee the mammoth project. Mr Andrews said $3 million will be released immediately so work can begin. When in opposition, Labor promised before last November’s election to remove 50 level crossings as part of Project 10,000 – a public transport

plan which promises to create 10,000 jobs while upgrading suburban road and rail networks. Eight Frankston line crossings to be removed, so road vehicles and trains no longer cross paths, include Mentone’s Balcombe Rd, Bonbeach’s Station St and Seaford’s Eel Race Rd and Seaford Rd crossings. Labor plans to have 20 of the 50 lev-

el crossings removed within the next four years before facing voters again. Ormond’s North Rd crossing and crossings at St Albans, Blackburn, Glen Iris and St Albans will be the first four removed but there was no confirmation on Monday of when Kingston residents can expect level crossings to be removed. Continued Page 4