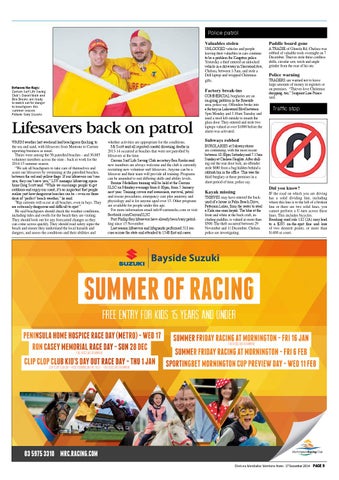 Between the flags: Carrum Surf Life Saving Club’s Daniel Male and Ben Brooks are ready to watch out for danger to beachgoers this summer season. Picture: Gary Sissons

UNLOCKED vehicles and people leaving their valuables in cars continue to be a problem for Kingston police. Yesterday a thief entered an unlocked vehicle in a driveway in Sherwood Ave, Chelsea, between 1-5am, and stole a Dell laptop and wrapped Christmas gifts.

A TRADIE of Glenola Rd, Chelsea was robbed of valuable tools overnight on 7 December. Thieves stole three cordless drills, circular saw, torch and angle grinder from the rear of his ute.

Lifesavers back on patrol WARM weather last weekend had beachgoers flocking to the sea and sand, with lifesavers from Mentone to Carrum reporting business as usual. Theirs were among the 56 patrolled beaches - and 30,685 volunteer members across the state - back at work for the 2014-15 summer season. “We ask all beachgoers to take care of themselves and assist our lifesavers by swimming at the patrolled beaches, between the red and yellow flags. If our lifesavers can’t see you, they can’t save you,” LSV manager lifesaving operations Greg Scott said. “While we encourage people to get outdoors and enjoy our coast, it’s so important that people realise just how dangerous beaches can be – even on those days of ‘perfect’ beach weather,” he said. “Rip currents will occur at all beaches, even in bays. They are extremely dangerous and difficult to spot.” He said beachgoers should check the weather conditions, including tides and swells for the beach they are visiting. They should look out for any forecasted changes as they can come across quickly. They should read safety signs the beach and ensure they understand the local hazards and dangers, and assess the conditions and their abilities and

whether activities are appropriate for the conditions. Mr Scott said all reported coastal drowning deaths in 2013-14 occurred at beaches that were not patrolled by lifesavers at the time. Carrum Surf Life Saving Club secretary Ben Rooks said new members are always welcome and the club is currently recruiting new volunteer surf lifesavers. Anyone can be a lifesaver and their team will provide all training. Programs can be amended to suit differing skills and ability levels. Bronze Medallion training will be held at the Carrum SLSC on Monday evenings from 6.30pm, from 5 January next year. Training covers surf awareness, survival, patrol and rescue procedures, emergency care plus anatomy and physiology and is for anyone aged over 15. Other programs are available for people under this age. For more information email info@carrumslsc.com or visit facebook.com/CarrumSLSC Port Phillip Bay lifesavers have already been busy patrolling since 15 November. Last season lifesavers and lifeguards performed 513 rescues across the state and attended to 1548 first aid cases.

COMMERCIAL burglaries are an on-going problem in the Braeside area, police say. Offenders broke into a factory in Lakewood Blvd between 5pm Monday and 3.10am Tuesday and used a stool left outside to smash the glass door. They entered and stole two laptops valued at over $1000 before the alarm was activated.

Police warning TRADERS are warned not to leave large amounts of money in registers or on premises. “Thieves love Christmas shopping, too,” Sergeant Lisa Prince said.

Subways robbed BURGLARIES at Subway stores are continuing, with the most recent between 10.30pm Saturday and 7.15am Sunday at Chelsea Heights. After drilling out the rear door lock, an offender stole $680 from a bag hidden behind a rubbish bin in the office. This was the third burglary at these premises in a short period of time, police say.

Kayak missing THIEVES may have entered the backyard of a house in Palm Beach Drive, Patterson Lakes, from the water to steal a Kahi one-man kayak. The blue at the front and white at the back craft, including paddles, is valued at more than $500. The theft occurred between 29 November and 11 December. Chelsea police are investigating.

Did you know? IF the road on which you are driving has a solid dividing line, including where this line is to the left of a broken line or there are two solid lines, you cannot perform a U-turn across these lines. This includes bicycles. Breaking road rule 132 (2A) may lead to a $295 on-the-spot fine and loss of two demerit points, or more than $1400 at court.