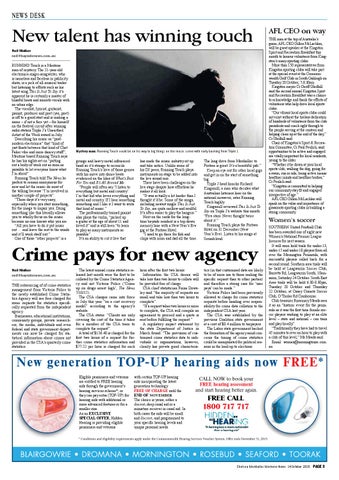 New talent has winning touch Neil Walker neil@baysidenews.com.au RUNNING Touch is a Mentone man of mystery. The 21-year-old electronica singer-songwriter, who is nameless and faceless in publicity shots, is a jack of all musical trades but listening to efforts such as his latest song This Is Just To Say it’s apparent he is certainly a master of blissful beats and smooth vocals with an urban edge. The vocalist, lyricist, guitarist, pianist, producer and poet (yes, poet) is off to a good start and is making a name – if not a face yet – for himself on the festival circuit after winning radio station Triple J’s Unearthed Artist of the Week award in July. Describing his music as “postmodern electronica” that “kind of just floats between that kind of Chet Faker vibe and more dancey stuff”, Mentone based Running Touch says he has his sights set on “putting out a body of work out as soon as possible to let everyone know what I’m about”. Running Touch told The News he prefers to remain anonymous for now and let the music do most of the talking because “I’m involved in another couple of projects”. “These days it’s very easy, especially when you start something, for the image to impair you. Doing something like this literally allows you to wholly focus on the music because no-one knows who you are. “All you have to do it put music out … and leave the rest to the winds and it’ll work itself out.” One of those “other projects” is a

Mystery man: Running Touch could be on his way to big things on the music scene with early backing from Triple J.

grunge and heavy metal influenced band so it’s strange to reconcile Running Touch’s love of those genres with his move into dance beats evidenced on the likes of What’s Best For You and It’s All Around Me. “People will often say ‘I listen to everything but metal and country’. I’m that kid who loves everything and metal and country. If I hear something something and I like it I want to write that kind of music.” The professionally trained pianist also plays the violin, “picked up a guitar at the age of about 11 and loved it” and is still keen “to learn to play as many instruments as possible”. It’s an ability to cut it live that

has made the music industry sit up and take notice. Unlike some of his DJ peers, Running Touch plays instruments on stage to be added into the live sound mix. There have been challenges on the live stage despite how effortless he makes it all look. “It was actually a lot harder than I thought it’d be. Some of the songs, including newest single This Is Just To Say, are quite mellow and soulful. It’s often easier to play the bangers.” Next on the cards for the longtime bayside resident is a trip down memory lane with a New Year’s Eve gig at the Portsea Hotel. “I used to go there for fish and chips with mum and dad all the time.

The long drive from Mordialloc to Portsea is great. It’s a beautiful pub.” Keep an eye out for other local gigs and get in on the start of something big. Triple J head honcho Richard Kingsmill, a man who decides what Australian listeners hear on the national airwaves, rates Running Touch highly. Kingsmill reviewed This Is Just To Say on Triple J’s website this month: “Five stars. Never thought twice about it.” Running Touch plays the Portsea Hotel on 31 December (New Year’s Eve). Listen to his songs at Soundcloud.

Crime pays for new agency Neil Walker neil@baysidenews.com.au THE outsourcing of of crime statistics management from Victoria Police to the newly established Crime Statistics Agency will see fees charged for some requests for statistics specifically requested from the independent agency. Businesses, educational institutions, community groups, private researchers, the media, individuals and even federal and state government departments can now be charged for statistical information about crimes not provided in the CSA’s quarterly crime statistics.

The latest annual crime statistics released last month were the first to be collated by the Crime Statistics Agency and not Victoria Police (‘Crime up on drugs arrest high’, The News 7/10/15). The CSA charges came into force in July this year “on a cost recovery model” according to the agency’s website. The CSA states: “Clients are only covering the cost of the time it takes for a member of the CSA team to complete the request”. A total of $156.40 is charged for the first two hours of a request for further crime statistics information and $77.52 per hour is charged for each

hour after the first two hours. Information the CSA deems will take less than two hours to collate will be provided free of charge. CSA chief statistician Fiona Dowsley said “the majority of requests are small and take less than two hours to complete”. “If a request takes two hours or more to complete, the CSA will compile an agreement to proceed and a quote is sent before fulfilling the request.” A regulatory impact statement by the state Department of Justice in March found: “The provision of customised crime statistics data to individuals or organisations, however, clearly has private good characteris-

tics (in that customised data are likely to be of more use to those making the specific request than to other parties) and therefore a strong case for ‘user pays’ can be made.” Victoria Police had been previously allowed to charge for crime statistics requests before handing over responsibility for crime data collation to the independent CSA last year. The CSA was established by the previous Coalition state government at a cost of $8.4 million to taxpayers. The Labor state government backed the formation of the agency amid concerns the timing of crime statistics could be manipulated for political reasons in the lead-up to elections.

AFL CEO on way THE man at the top of Australia’s game, AFL CEO Gillon McLachlan, will be guest speaker at the Kingston Sport and Recreation Breakfast this month to honour volunteers from Kingston’s many sporting clubs. More than 150 representatives from Kingston sporting clubs will take part at the special event at the Commonwealth Golf Club in South Oakleigh on Tuesday 20 October, 7-8.30am. Kingston mayor Cr Geoff Gledhill said the second annual Kingston Sport and Recreation Breakfast was a chance to acknowledge and thank the efforts of volunteers who help drive local sports clubs. “Our vibrant local sports clubs could not exist without the tireless dedication of hundreds of volunteers from the club presidents and coach right through to the people serving at the canteen and helping clean up at the end of the day,” Cr Gledhill said. Chair of Kingston’s Sport &amp; Recreation Committee, Cr Paul Peulich, said opportunities to be active and engaged are vitally important for local residents, young to the older. “Whether it be down at your local sports club, walking the dog, going for a swim, run or ride, being active means healthier minds and healthier bodies,” Cr Peulich said. “Kingston is committed to helping our community stay fit and engaged irrespective of age.” AFL CEO Gillon McLachlan will speak on the value and importance of grassroots sporting clubs in building a strong community.

Women’s soccer SOUTHERN United Football Club has been awarded one of eight new Women’s National Premier League licences for next season. It will soon hold trials for under-13, under-15 and under-18 players from all over the Mornington Peninsula, with successful players called back for a second round. Southern area trials will be held at Langwarrin Soccer Club, Barretts Rd, Langwarrin South, 10amnoon, Saturday 24 October. South East Area trials will be held 6.30-8.30pm, Tuesday 20 October and Thursday 22 October, at Casey Comets Soccer Club, O’Tooles Rd Cranbourne. Club treasurer Rosemary Meads sees it as an “historic event for the peninsula as it was the first time female soccer players wishing to play at an elite level – state and national – can train and play locally”. “Traditionally they have had to travel 45 minutes to over an hour to play with a club of this level,” Ms Meads said. Email: women@morningtonsc.com. au

with certain hearing needs to beTOP-UP experienced to be aids incorporating the islatest appreciated, which why we’re generation offering atechnology FREE TRIAL to the FREE OFpeople CHARGE until theto rst 50 who respond NOVEMBER END SEPTEMBER. thisOF offer. Hear and enjoy the The choice isfor yours, eitherYou a will difference yourself. discreet, discrete deep canal aid or a be impressed. miniature receiver in canal aid. In As an EXCLUSIVE short term both cases theOFFER, aids will Hidden be small SPECIAL discreet, andHearing discrete, programmed is and providing eligibleto your specific hearing levels pensioners and veterans and unique personal needs.