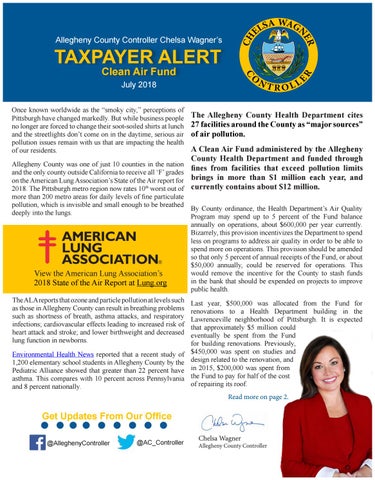 TAXPAYER ALERT Clean Air Fund July 2018 Once known worldwide as the “smoky city,” perceptions of Pittsburgh have changed markedly. But while business people no longer are forced to change their soot-soiled shirts at lunch and the streetlights don’t come on in the daytime, serious air pollution issues remain with us that are impacting the health of our residents.

Allegheny County was one of just 10 counties in the nation and the only county outside California to receive all ‘F’ grades on the American Lung Association’s State of the Air report for 2018. The Pittsburgh metro region now rates 10th worst out of more than 200 metro areas for daily levels of fine particulate pollution, which is invisible and small enough to be breathed By County ordinance, the Health Department’s Air Quality deeply into the lungs. Program may spend up to 5 percent of the Fund balance annually on operations, about $600,000 per year currently. Bizarrely, this provision incentivizes the Department to spend less on programs to address air quality in order to be able to spend more on operations. This provision should be amended so that only 5 percent of annual receipts of the Fund, or about $50,000 annually, could be reserved for operations. This would remove the incentive for the County to stash funds View the American Lung Association’s in the bank that should be expended on projects to improve 2018 State of the Air Report at Lung.org public health. The ALA reports that ozone and particle pollution at levels such as those in Allegheny County can result in breathing problems such as shortness of breath, asthma attacks, and respiratory infections; cardiovascular effects leading to increased risk of heart attack and stroke; and lower birthweight and decreased lung function in newborns. Environmental Health News reported that a recent study of 1,200 elementary school students in Allegheny County by the Pediatric Alliance showed that greater than 22 percent have asthma. This compares with 10 percent across Pennsylvania and 8 percent nationally.

Get Updates From Our Office @AlleghenyController

Environmental advocates have argued that building renovations are an inappropriate use of the Clean Air Fund in that they do not result in reduced pollution, and that these payments were not properly disclosed to an advisory committee which is to make recommendations on appropriations from the Clean Air Fund. Building projects are common expenses for County government, with most major projects being funded through borrowing. In fact, $90 million in new borrowing for capital projects is proposed for this year. Rather than drawing down resources intended to address the urgent problem of our air quality, renovations to the Health Department facility should be prioritized among other major capital needs, such as the City-County Building and County Courthouse roofs. The Clean Air Fund has been utilized to fund pollution monitoring, solar energy installations, retrofits of gasburning engines, and other initiatives. But the data show that much more must be done. These funds can also have the greatest impact in high-poverty communities which have lacked significant investment for decades, and where air pollution is often most severe due to their proximity to major industrial facilities.

The Clean Air Fund should be dedicated to projects that can meaningfully improve public health, and the Health Department must improve outreach to identify organizations that can benefit from these dollars. Non-profit organizations, schools and local governments may request funds for air quality initiatives or public education by contacting: