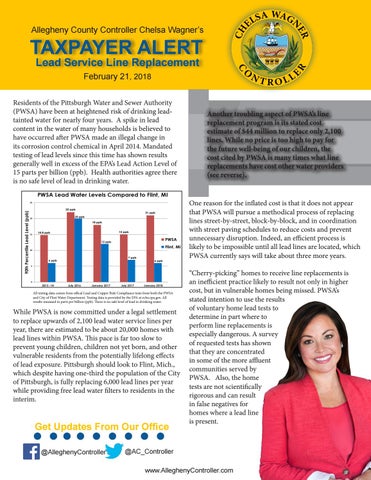 TAXPAYER ALERT Lead Service Line Replacement February 21, 2018 Residents of the Pittsburgh Water and Sewer Authority (PWSA) have been at heightened risk of drinking leadtainted water for nearly four years. A spike in lead content in the water of many households is believed to have occurred after PWSA made an illegal change in its corrosion control chemical in April 2014. Mandated testing of lead levels since this time has shown results generally well in excess of the EPA’s Lead Action Level of 15 parts per billion (ppb). Health authorities agree there is no safe level of lead in drinking water. PWSA Lead Water Levels Compared to Flint, MI 90th Percentile Lead Level (ppb)

Another troubling aspect of PWSA’s line replacement program is its stated cost estimate of $44 million to replace only 2,100 lines. While no price is too high to pay for the future well-being of our children, the cost cited by PWSA is many times what line replacements have cost other water providers (see reverse).

One reason for the inflated cost is that it does not appear that PWSA will pursue a methodical process of replacing lines street-by-street, block-by-block, and in coordination with street paving schedules to reduce costs and prevent unnecessary disruption. Indeed, an efficient process is likely to be impossible until all lead lines are located, which PWSA currently says will take about three more years.

2013 -14 July 2016 January 2017 July 2017 January 2018 All testing data comes from offical Lead and Copper Rule Compliance tests from both the PWSA and City of Flint Water Department. Testing is provided the EPA at echo.epa.gov. AllRule resultsCompliance measued in parts perfrom billionboth (ppb).the There is no All testing datadata comes from by offical Lead and Copper tests PWSA safe level of lead in drinking water.

and City of Flint Water Department. Testing data is provided by the EPA at echo.epa.gov. All results measued in parts per billion (ppb). There is no safe level of lead in drinking water.

While PWSA is now committed under a legal settlement to replace upwards of 2,100 lead water service lines per year, there are estimated to be about 20,000 homes with lead lines within PWSA. This pace is far too slow to prevent young children, children not yet born, and other vulnerable residents from the potentially lifelong effects of lead exposure. Pittsburgh should look to Flint, Mich., which despite having one-third the population of the City of Pittsburgh, is fully replacing 6,000 lead lines per year while providing free lead water filters to residents in the interim.

Get Updates From Our Office @AlleghenyController

“Cherry-picking” homes to receive line replacements is an inefficient practice likely to result not only in higher cost, but in vulnerable homes being missed. PWSA’s stated intention to use the results of voluntary home lead tests to determine in part where to perform line replacements is especially dangerous. A survey of requested tests has shown that they are concentrated in some of the more affluent communities served by PWSA. Also, the home tests are not scientifically rigorous and can result in false negatives for homes where a lead line is present.

As other cities have demonstrated, a well-planned, efficient process of finding and replacing lead service lines can result in more families protected, at a lower cost, and in less time. The need for line replacements has been known to Pittsburgh and PWSA officials since at least mid-2016, yet it has not been acted upon with urgency or vision. As this process finally begins in earnest, we must work to ensure that it is a smart one that best protects all those at risk while using our public funds as efficiently as possible. $25,000

What can I do? Protect yourself

Unless you are certain you do not have a lead service line, purchase bottled water for drinking and cooking or a filter that is NSF-approved to remove lead. (Note that filters cost around $30 and require regular replacement of filter cartridges to remain effective.) Demand that the City identify the material in your service line by calling the PWSA at 412-255-2423. If there is no record, demand an immediate curb box inspection, which can identify the material without excavation. Contact City leadership to demand action. Tell the Mayor (412-255-2626) and City Council (412-255-2138) that the City must reinstate free filter distribution and replace all lead lines without delay.