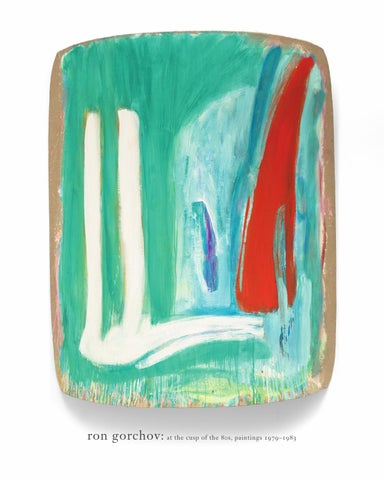 Painting on the Brink Thomas Micchelli

ver the course of a half-century, Ron Gorchov

has pursued a single-minded vision that few,

if any, artists can match. He developed his curved

Imagism, his independent streak and impulse

surfaces, which have been likened to saddles,

toward complexity and ambiguity mirror the

shields, and masks, in the mid-1960s as a reaction

against the prevailing Formalist insistence on

Nilsson, Jim Nutt, Suellen Rocca, and the rest of

painting’s self-reflexivity and flatness. In doing

so, he turned Minimalism on its head, working

within tightly controlled parameters in order to

when he was in his mid-twenties, to seek out the

Graham. As the conduit between the European

Although his work is a world apart from the

It was the same impulse that led Gorchov,

When he was a teenager, Gorchov, who was

and American avant-garde in the years preceding

born in Chicago in 1930, attended Saturday

art classes at the School of the Art Institute of

inflection point between past and present—

Chicago. After completing his freshman year

Cubism and Surrealism on one side, and Abstract

at the University of Mississippi, he returned to

Expressionism on the other—while practicing an

Chicago to study at Roosevelt College and take

eccentric form of figuration in his own studio.

night courses at the Art Institute. He later enrolled

at the University of Illinois in Urbana, and in 1953

a similar crossroads. Old forms were sapped of

he moved to New York City.

their vitality, along with the critical consensus

Gorchov at the Whitney Museum in 1977 with the painting Airship

supporting them. It was up to adventurous young artists to reinvent painting as they saw fit.

“When in the 1960s the validity and future of

painting were called into question, Gorchov set out to resolve the uncertainty in his own way,”1

Almost as readily as the marks evoke associations to amoebae, eyes, kidneys or other organic shapes, Gorchov’s canvases themselves are often compared with primitive tribal art and artifacts, particularly shields and masks. Perhaps their forbidding, transcendent, ritualistic qualities inspire this comparison.4

We recoil from the label “primitive” today,

about the artist and his work. Kearse describes the

wincing at its indiscriminate presumptions. But

paintings he saw in Gorchov’s studio as disengaged

we are free to read into Kearse’s description,

from the conventional figure/ground relationship;

which is attempting to grasp the regenerative

rather, his shapes “fluctuate between advance and

retreat, emerging from and withdrawing behind

carry a sense of starting over, of remaking art

in one’s own image, of imagining each painting

tension that the writer deemed “anti-modernist.”3

as the first of its kind. Yet, as an American artist

Today we recognize this quality not as anti-

trained in the Western tradition, Gorchov can go

modernist but as postmodernist, and we can more

only so far without entering a web of mediating

stretchers represent between the thingness of

on impasto and the thingness of fellow Chicagoan

and sculpture in their fraught effort to adapt

notably in the work of Julian Schnabel, Anselm

Gorchov’s work from the period covered in

down to the elemental conditions of line, color,

to flickering Impressionist brushwork and

evenly matched in their solidity. As Kearse notes:

established a Post-Impressionist immediacy that

In that regard, the work of this period calls to

Despite his inability to discard inborn cultural

edged up to the varieties of abstraction—formal,

The paintings that Gorchov made on the cusp

political, philosophical, and mystical—that would

of the ’80s, after a decade of exploring the potential

burst forth in the emergent 20th century.

of the curved surface, could be considered among

his most significant, if only for the fire they lit

for a new generation of artists bustling with the

from the forces that compelled humanity to take

desire to infuse real-world upheavals into their

the illogical step of creating art in the first place,

work. Gorchov’s art had cleared a threshold, and

to a mutable future that demands strange new

they raced through it.

forms to illuminate the impossible twists of its unspooling narrative. His painted constructions,

of Aboriginal Australian shields or Bamanan

masks, while abruptly changing the subject of

contemporary discourse from the coolly elegant

Kelly to something raw, hot, and stirring with

The reason Gorchov embarked on the shaped canvas, as he told the artist Ray Smith in an interview published in the catalogue of a solo exhibition at the Centro Atlántico de Arte Moderno, Las Palmas, Spain, was “to change the context of painting because I opposed the adhoc acceptance of the rectangle, wanting a more intentional form that would create a new kind of visual space.”5 His actions, then, were motivated less by an interest in formal experiment than by a need for radical critique.

on Gorchov was born on April 5, 1930, in Chicago, Illinois. His mother, a painter, encouraged his interest in art, and at the age of

14 he began to take Saturday classes at the School of the Art Institute of Chicago. In 1947, he enrolled at the University of Mississippi but left after his freshman year and returned to Chicago, where he enrolled at Roosevelt College and took night classes at the Art Institute. He concluded his formal education at the University of Illinois in Urbana.

Moving to New York City in 1953, Gorchov supported himself as

a lifeguard and, in 1956, he met the Russian-American artist John D. Graham, who became an important mentor. He had his first solo exhibition in 1960, at the Tibor de Nagy Gallery, and in 1967, the year following his third and final show there, he created his first â&amp;#x20AC;&amp;#x153;saddleâ&amp;#x20AC;? painting, a curved surface that he would pursue in countless variations throughout his career.

Although Gorchov exhibited regularly in galleries such as Barbara

Gladstone, Marlborough, and Jack Tilton, as well as two Whitney

Biennials (1975 and 1977) and the influential group show, Language, Drama, Source and Vision, at the New Museum of Contemporary Art, New York, his work became more widely known after a pair of noteworthy solo exhibitions, in 2005 at Vito Schnabel Gallery, and in 2006 at MoMA PS1. He has been represented by Cheim &amp; Read since 2012.

Gorchovâ&amp;#x20AC;&amp;#x2122;s work is held in the permanent collections of the 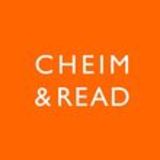