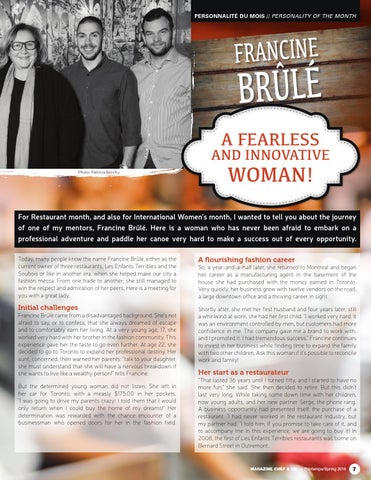 For Restaurant month, and also for International Women’s month, I wanted to tell you about the journey of one of my mentors, Francine Brûlé. Here is a woman who has never been afraid to embark on a professional adventure and paddle her canoe very hard to make a success out of every opportunity. Today, many people know the name Francine Brûlé, either as the current owner of three restaurants, Les Enfants Terribles and the Soubois or like in another era, when she helped make our city a fashion mecca. From one trade to another, she still managed to win the respect and admiration of her peers. Here is a meeting for you with a great lady.

Shortly after, she met her first husband and four years later, still a whirlwind at work, she had her first child. "I worked very hard. It was an environment controlled by men, but customers had more confidence in me. The company gave me a brand to work with, and I promoted it. I had tremendous success." Francine continues to invest in her business while finding time to expand the family with two other children. Ask this woman if it’s possible to reconcile work and family!

Francine Brûlé came from a disadvantaged background. She’s not afraid to say, or to confess, that she always dreamed of escape and to comfortably earn her living. At a very young age, 17, she worked very hard with her brother in the fashion community. This experience gave her the taste to go even further. At age 22, she decided to go to Toronto to expand her professional destiny. Her aunt, concerned, then warned her parents: "talk to your daughter, she must understand that she will have a nervous breakdown if she wants to live like a wealthy person!" tells Francine. But the determined young woman did not listen. She left in her car for Toronto, with a measly $175.00 in her pockets. "I was going to drive my parents crazy! I told them that I would only return when I could buy the home of my dreams!" Her ­determination was rewarded with the chance encounter of a businessman who opened doors for her in the fashion field.

So, a year-and-a-half later, she returned to Montreal and began her career as a manufacturing agent in the basement of the house she had purchased with the money earned in Toronto. Very quickly, her business grew with twelve vendors on the road, a large downtown office and a thriving career in sight.

Her start as a restaurateur "That lasted 36 years until I turned fifty, and I started to have no more fun," she said. She then decided to retire. But this didn’t last very long. While taking some down time with her children, now young adults, and her new partner Serge, the phone rang. A business opportunity had presented itself: the purchase of a restaurant. "I had never worked in the restaurant industry, but my partner had. "I told him. If you promise to take care of it, and to accompany me in this experience, we are going to buy it! In 2008, the first of Les Enfants Terribles restaurants was borne on Bernard Street in Outremont. 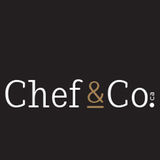