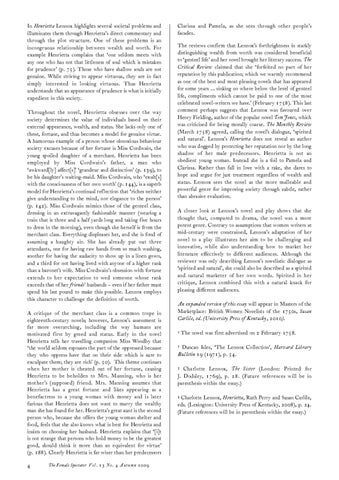 In Henrietta Lennox highlights several societal problems and illuminates them through Henrietta’s direct commentary and through the plot structure. One of these problems is an incongruous relationship between wealth and worth. For example Henrietta complains that ‘one seldom meets with any one who has not that littleness of soul which is mistaken for prudence’ (p. 75). Those who have shallow souls are not genuine. While striving to appear virtuous, they are in fact simply interested in looking virtuous. Thus Henrietta understands that an appearance of prudence is what is initially expedient in this society. Throughout the novel, Henrietta obsesses over the way society determines the value of individuals based on their external appearance, wealth, and status. She lacks only one of these, fortune, and thus becomes a model for genuine virtue. A humorous example of a person whose obnoxious behaviour society excuses because of her fortune is Miss Cordwain, the young spoiled daughter of a merchant. Henrietta has been employed by Miss Cordwain’s father, a man who ‘awkward[ly] affect[s]’ ‘grandeur and distinction’ (p. 139), to be his daughter’s waiting−maid. Miss Cordwain, who ‘exult[s] with the consciousness of her own worth’ (p. 144), is a superb model for Henrietta’s continual reflection that ‘riches neither give understanding to the mind, nor elegance to the person’ (p. 142). Miss Cordwain mimics those of the genteel class, dressing in an extravagantly fashionable manner (wearing a train that is three and a half yards long and taking five hours to dress in the morning), even though she herself is from the merchant class. Everything displeases her, and she is fond of assuming a haughty air. She has already put out three attendants, one for having raw hands from so much washing, another for having the audacity to show up in a linen gown, and a third for not having lived with anyone of a higher rank than a baronet’s wife. Miss Cordwain’s obsession with fortune extends to her expectation to wed someone whose rank exceeds that of her friends’ husbands – even if her father must spend his last pound to make this possible. Lennox employs this character to challenge the definition of worth. A critique of the merchant class is a common trope in eighteenth−century novels; however, Lennox’s assessment is far more overarching, including the way humans are motivated first by greed and status. Early in the novel Henrietta tells her travelling companion Miss Woodby that ‘the world seldom espouses the part of the oppressed because they who oppress have that on their side which is sure to exculpate them; they are rich’ (p. 50). This theme continues when her mother is cheated out of her fortune, causing Henrietta to be beholden to Mrs. Manning, who is her mother’s (supposed) friend. Mrs. Manning assumes that Henrietta has a great fortune and likes appearing as a benefactress to a young woman with money and is later furious that Henrietta does not want to marry the wealthy man she has found for her. Henrietta’s great aunt is the second person who, because she offers the young woman shelter and food, feels that she also knows what is best for Henrietta and insists on choosing her husband. Henrietta explains that ‘[i]t is not strange that persons who hold money to be the greatest good, should think it more than an equivalent for virtue’ (p. 188). Clearly Henrietta is far wiser than her predecessors 4

Clarissa and Pamela, as she sees through other people’s facades. The reviews confirm that Lennox’s forthrightness in starkly distinguishing wealth from worth was considered beneficial to ‘genteel life’ and her novel brought her literary success. The Critical Review claimed that she ‘forfeited no part of her reputation by this publication; which we warmly recommend as one of the best and most pleasing novels that has appeared for some years … sinking no where below the level of genteel life, compliments which cannot be paid to one of the most celebrated novel−writers we have.’ (February 1758). This last comment perhaps suggests that Lennox was favoured over Henry Fielding, author of the popular novel Tom Jones, which was criticised for being morally coarse. The Monthly Review (March 1758) agreed, calling the novel’s dialogue, ‘spirited and natural’. Lennox’s Henrietta does not reveal an author who was dogged by protecting her reputation nor by the long shadow of her male predecessors. Henrietta is not an obedient young woman. Instead she is a foil to Pamela and Clarissa. Rather than fall in love with a rake, she dares to hope and argue for just treatment regardless of wealth and status. Lennox sees the novel as the more malleable and powerful genre for improving society through subtle, rather than abrasive evaluation. A closer look at Lennox’s novel and play shows that she thought that, compared to drama, the novel was a more potent genre. Contrary to assumptions that women writers at mid−century were constrained, Lennox’s adaptation of her novel to a play illustrates her aim to be challenging and innovative, while also understanding how to market her literature effectively to different audiences. Although the reviewer was only describing Lennox’s novelistic dialogue as ‘spirited and natural’, she could also be described as a spirited and natural marketer of her own words. Spirited in her critique, Lennox combined this with a natural knack for pleasing different audiences. An expanded version of this essay will appear in Masters of the Marketplace: British Women Novelists of the 1750s, Susan Carlile, ed. (University Press of Kentucky, 2010). 1 The

novel was first advertised on 2 February 1758.

Charlotte Lennox, The Sister (London: Printed for J. Dodsley, 1769), p. 28. (Future references will be in parenthesis within the essay.) 3

The Female Spectator is a quarterly publication produced by Chawton House Library, containing articles on women writers and their work in the long eighteenth century, as well as news about activities at the Library. 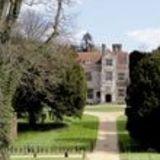