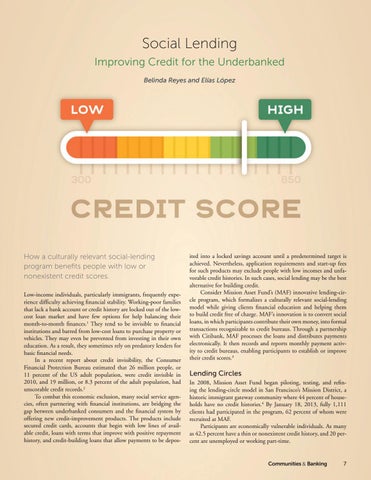 How a culturally relevant social-lending program benefits people with low or nonexistent credit scores. Low-income individuals, particularly immigrants, frequently experience difficulty achieving financial stability. Working-poor families that lack a bank account or credit history are locked out of the lowcost loan market and have few options for help balancing their month-to-month finances.1 They tend to be invisible to financial institutions and barred from low-cost loans to purchase property or vehicles. They may even be prevented from investing in their own education. As a result, they sometimes rely on predatory lenders for basic financial needs. In a recent report about credit invisibility, the Consumer Financial Protection Bureau estimated that 26 million people, or 11 percent of the US adult population, were credit invisible in 2010, and 19 million, or 8.3 percent of the adult population, had unscorable credit records.2 To combat this economic exclusion, many social service agencies, often partnering with financial institutions, are bridging the gap between underbanked consumers and the financial system by offering new credit-improvement products. The products include secured credit cards, accounts that begin with low lines of available credit, loans with terms that improve with positive repayment history, and credit-building loans that allow payments to be depos-

ited into a locked savings account until a predetermined target is achieved. Nevertheless, application requirements and start-up fees for such products may exclude people with low incomes and unfavorable credit histories. In such cases, social lending may be the best alternative for building credit. Consider Mission Asset Fund’s (MAF) innovative lending-circle program, which formalizes a culturally relevant social-lending model while giving clients financial education and helping them to build credit free of charge. MAF’s innovation is to convert social loans, in which participants contribute their own money, into formal transactions recognizable to credit bureaus. Through a partnership with Citibank, MAF processes the loans and distributes payments electronically. It then records and reports monthly payment activity to credit bureaus, enabling participants to establish or improve their credit scores.3

Lending Circles In 2008, Mission Asset Fund began piloting, testing, and refining the lending-circle model in San Francisco’s Mission District, a historic immigrant gateway community where 44 percent of households have no credit histories.4 By January 18, 2013, fully 1,111 clients had participated in the program, 62 percent of whom were recruited at MAF. Participants are economically vulnerable individuals. As many as 42.5 percent have a thin or nonexistent credit history, and 20 percent are unemployed or working part-time.

This Communities &amp; Banking article is copyrighted by the Federal Reserve Bank of Boston. The views expressed are not necessarily those of the Bank or the Federal Reserve System. Copies of articles may be downloaded without cost at www.bostonfed.org/commdev/c&amp;b.

The authors selected as a treatment group a sample of MAF clients who started on their first lending circle between January 2011 and December 2012 and completed it by January 2013. During that period, a total of 260 new participants enrolled at MAF’s Mission District office. A survey was administered to the treatment group at the start of their lending circle and 10 months later. The same went for a control group of 383 individuals with similar characteristics, recruited in the Mission District. Researchers collected credit reports at the beginning and end for both groups.

Mission Asset Fund staffer shows client Shweta how to sign up for a lending circle on her mobile phone.

The study found that lending circles are successfully transitioning immigrant women in particular to the financial mainstream and improving outstanding debt. The success of the program is notable in that the study took place in the wake of one of the most severe recessions in California’s history. The program appears to be serving two purposes: for people with no credit history, lending circles allow them to establish credit and reduce their debt. People with an established credit record find that lending circles assist them in getting a handle on their financial situations and improving their outstanding debt. The likelihood of an improved credit score depended on the credit score in the pretest. (See “Probability of Success Depends on Original Credit Score.”) Controlling for all characteristics of the model, individuals in the treatment group were almost twice as likely as those in the control group to succeed if they started with no credit score or a poor score (&lt; 580). As the pretest score increases, the probability of success decreases. There was no significant difference in the probability of success between the treatment group and the control group for people who started with a credit score above 620. In addition to the changes in credit scores, treatment was associated with significant adjustments to other aspects of the credit report. (See “Changes in Credit Report Elements.”) Most striking were the changes in outstanding debt. Clients—particularly people photo Page Bertelsen

Participants take an online financial training class before joining a lending circle. Each individual decides on an amount to contribute and is matched to a group of six to 10 participants who are contributing the same amount. Each person, in rotation, gets a turn to borrow the collected funds. The group decides on the terms of the contract, the duration of the loan, the loan amount, and the distribution of the funds. MAF secures the loans in case any participant defaults. The program aims to help financially disenfranchised populations transition to the financial mainstream by providing education, coaching, and access to social loans. The expectation is that by gaining information, experiencing the benefits of saving, and receiving peer support, clients will be able to improve their credit scores and change their financial behavior. To study the program, researchers employed a quasi-experimental design. Participants were deemed successful if their credit score saw an improvement of 20 or more points after 10 months. The same criteria were used to ascertain whether the individuals in the control group were successful.

Zenaida, shown with husband Luis and son Mateo, launched a catering business after improving her credit through a lending circle.

Including those with no score

Only those with score

Including those with no score

Only those with score

Belinda I. Reyes is the director of San Francisco State University’s César E. Chávez Institute. Elías López is the registrar and the director of the Office of Technology, Division of Student Affairs, at the University of California-Davis. Contact the authors at reyesb@sfsu.edu.

Overall, participants say they gained more awareness and control over their spending habits and felt more confident seeking and utilizing financial services. Many participants expressed a change in their financial knowledge and behavior. Additionally, many gained an increased understanding of the importance of budgeting and maintaining a positive credit rating. The promise of financial stability is now available nationwide. Since our analysis, MAF has grown beyond its original Bay Area birthplace. Forty-six nonprofit partners across 12 states are working with MAF today, providing lending circles to more than 3,000 participants and guaranteeing almost $4 million in loans. A social-loan platform at lendingcircles.org has also been developed for clients anywhere in the nation to access lending circles on their mobile devices.

Zenaida, a lending circle participant, drawing a number that determines the order of loan distribution.

Study results: How a culturally relevant social-lending program benefits people with low or nonexistent credit scores - especially marginalized communities in the US.