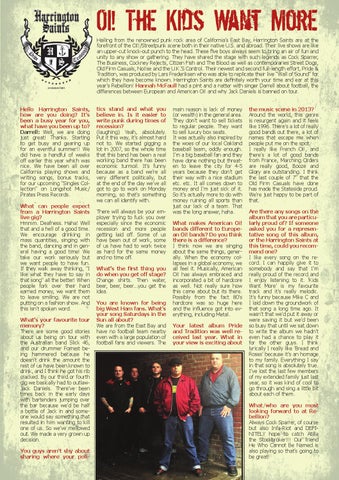 Hailing from the renowned punk rock area of California’s East Bay, Harrington Saints are at the forefront of the OI!/Streetpunk scene both in their native U.S. and abroad. Their live shows are like an upper-cut knock-out punch to the head. These five boys always seem to bring an air of fun and unity to any show or gathering. They have shared the stage with such legends as Cock Sparrer, The Business, Cockney Rejects, Citizen Fish and The Blood as well as contemporaries Street Dogs, Old Firm Casuals, Noi!se and the U.K.’S Control. Their newest and second full-length effort, Pride &amp; Tradition, was produced by Lars Frederiksen who was able to replicate their live “Wall of Sound” for which they have become known. Harrington Saints are definitely worth your time and ear at this year’s Rebellion! Hannah McFaull had a pint and a natter with singer Darrell about football, the differences between European and American Oi! and why Jack Daniels is banned on tour. Hello Harrington Saints, how are you doing? It&#39;s been a busy year for you, what have you been up to? Darrell: Well, we are doing just great! Thanks. Starting to get busy and gearing up for an eventful summer!! We did have a handful of weeks off earlier this year which was nice. We have been all over California playing shows and writing songs, bonus tracks, for our upcoming &quot;Singles Collection&quot; on Longshot Music/ Pirates Press Records. What can people expect from a Harrington Saints live gig? Hmmm. Deafness. Haha! Well that and a hell of a good time. We encourage drinking in mass quantities, singing with the band, dancing and in general having a good time! We take our work seriously but we want people to have fun. If they walk away thinking, &quot;I like what they have to say in that song&quot; all the better! When people fork over their hard earned money, we want them to leave smiling. We are not putting on a fashion show. And this isn&#39;t spoken word. What’s your favourite tour memory? There are some good stories about us being on tour with the Australian band Slick 46, and our drummer Forrest being hammered because he doesn&#39;t drink the amount the rest of us have been known to drink, and I think he got his rib cracked. By our third or fourth gig we basically had to outlawJack Daniels. There&#39;ve been times back in the early days with bartenders jumping over the bar because we&#39;d be half a bottle of Jack in and someone would say something that resulted in him wanting to kill one of us. So we&#39;ve mellowed out. We made a very grown up decision. You guys aren&#39;t shy about sharing where your poli-

tics stand and what you believe in. Is it easier to write punk during times of recession? (laughing) Yeah, absolutely. Put it this way, it&#39;s almost hard not to. We started gigging a lot in 2007, so the whole time that this band has been a real working band there has been economic turmoil. It&#39;s funny because as a band we&#39;re all very different politically, but at the end of the day we&#39;ve all got to go to work on Monday morning, so that&#39;s something we can all identify with. There will always be your employer trying to fuck you over especially since the economic recession and more people getting laid off. Some of us have been out of work, some of us have had to work twice as hard for the same money and no time off. What’s the first thing you do when you get off stage? Change shirts. Then water, beer, beer, beer...you get the idea. You are known for being big West Ham fans. What&#39;s your song Saturdays in the Sun all about? We are from the East Bay and have no football team nearby even with a large population of football fans and viewers. The

main reason is lack of money (or wealth) in the general area. They don&#39;t want to sell tickets to regular people. They want to sell luxury box seats. It was actually also inspired by the woes of our local Oakland baseball team, oddly enough. I&#39;m a big baseball fan and they have done nothing but threaten to leave the city for 4-5 years because they don&#39;t get their way with a nice stadium etc. etc. It all comes down to money and I&#39;m just sick of it. So it’s actually more to do with money ruining all sports than just our lack of a team. That was the long answer, haha. What makes American Oi! bands different to European Oi! bands? Do you think there is a difference? I think now we are singing about the same things, generally. When the economy collapses in a global economy, we all feel it. Musically, American Oi! has always embraced and incorporated a bit of hardcore as well. Not really sure how this came about but its there. Possibly from the fact 80&#39;s hardcore was so huge here and the influence got into everything, including Metal. Your latest album Pride and Tradition was well received last year. What in your view is exciting about

the music scene in 2013? Around the world, this genre is resurgent again and it feels like 1996. There&#39;s a lot of really good bands out there, a lot of names that escape me when people put me on the spot. I really like French Oi!, and there&#39;s a lot of good bands from France, Marching Orders are really good, Booze and Glory are outstanding. I think the last couple of 7” that the Old Firm Casuals have done has made the Stateside proud. We&#39;re just happy to be part of that. Are there any songs on the album that you are particularly proud of? If someone asked you for a representative song of this album, or the Harrington Saints at this time, could you recommend one? I like every song on the record. I can happily give it to somebody and say that I&#39;m really proud of the record and I enjoy listening to it. &#39;Kids Want More&#39; is my favourite track and it&#39;s really melodic. It&#39;s funny because Mike C and I laid down the groundwork of that song a long time ago. It wasn&#39;t that we&#39;d put it away or were saving it but we&#39;d been so busy that until we sat down to write the album we hadn&#39;t even had a chance to play it for the other guys. I think lyrically I really like &#39;Bread and Roses&#39; because it&#39;s an homage to my family. Everything I say in that song is absolutely true. I&#39;ve lost the last few members of my extended family just last year, so it was kind of cool to go through and sing a little bit about each of them. What/who are you most looking forward to at Rebellion? Always Cock Sparrer, of course but also Infa-Riot and DEFINITELY hope to catch Atilla the Stockbroker!!! Our friend He Who Cannot Be Named is also playing so that’s going to be great!

Rebellion Festivals is the largest independent PUNK & ALTERNATIVE festival in the world. Everyone who buys a ticket gets a FREE A4 full colour programme. Here is the 2013 issue. If you were there here's a reminder, if you weren't here's what you're missing! Enjoy...