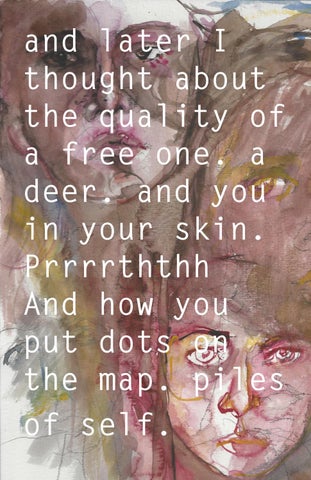 and later I thought about the quality of a free one. a deer. and you in your skin. Prrrrththh And how you put dots on the map. piles of self.

There are piles of drawings on my floor. They are self portraits. I drew them at one point. I keep anything. Later later and later on, I put these piles into smaller piles. I had to make a self portrait and show it in school. That is what you do. This happened over and over, so I started doing it myself at home. I found all of them. They are next to me right now. I can’t fit all of them on my scanner.. But they still touch the ground. That makes them real. They do not all have dates. Years. I am sad about that. Some do have dates. I was good for a while. In 2011 I cared. I guess. I can see the changes in my glasses. I can see that they have gotten bigger. I can see that I do not take enough photos of myself compared to some. I think it’s sick to think about selfies as compared to the Venus de Milo. Someone told me that once. That it’s us, mostly women, trying to harness some classical bodily familiarity. Its the paper on the ground. It’s the paper on the ground. Selfies make me think that we are in posters. We are touching, but it’s harsh, it’s rubber, it’s ice, it’s depths and shaking. We can’t get away. Pencil mark goes into points and leaves otherwise.

My oldest friend (GREEN BEANS. not a nickname, but a story I remember: the first time we met when I was 4 years old. I was throwing green beans on the ground in the cafeteria and she said, “You know, someone’s going to have to clean that up!” It was the first time I thought about janitors. and maybe consequences.) Anne once told me in 4th or 5th grade while we are in art class that my nose looked like a punch buggy (a VW Bug). I always remembered that and I think it helped me draw my nose better.

Its hard to see all of this at once. Especially that none of these representations look like me you

y when I am feeling critical, and I want to say e. Sometimes itâ&#x20AC;&#x2122;s difficult to remember how/who are.

Listening to Calexico’s song “Funeral Singers.” How do I feel an ownership over a song that I had nothing to do with. A thought, like if I could , or if I was, I would have already made that song. If I could play all the instruments. If I just had more time. in the most beautiful sense. I am and I embody that song. For now.

I used to, and probably still do, think that when people are drawing other pwopl, they are actually drawing a self portrait. The girl in my figure drawing class made skeltons. She was a skeleton. Was it just that I saw her as a skeleton? I made so many curves. So many that my teacher asked me to focus on drawing triangels. realation points. The more I drew the less precise I got. OR the more curvy. the more relative. the more feeling. that must be a form of accuracy. are all of these curled pages just shadows? Are they people frozen and maybe they will move later? I hold a paper and it becomes more dense with with with marks. I never know where those prints came from. Do we have to take a step back because? What if I held realities that I was afraid of>>>>>>

DIGITAL ART MAKES IT TOO EASY TO ERASE

I HATED THE DRAWINGS THAT WERE UNCOMFORTABLE. THEY HAVE BECOME THE MOST TRUE DRAWINGS I HAVE. YOU HATED IT THEN, BUT THAT MEANS YOU ARE ON TO SOMETHING. YOU HAVE TO DEAL WITH SOMETHING, THIS IS SIGNIFICANT. THIS MEANS SOMETHING. AND IF I WAS JUST DRAWING DIGITALLY THEN, I WOULDNâ&#x20AC;&#x2122;T HAVE ALL OF THE DISCOMFORT. I REALIZED THIS ONCE IN THE PAST, AND I REFUSED TO USE AN ERASER. I WANTED TO SEE IT PILE UP. I NEEDED IT.

I thought it would make a special moment if I were to draw a self portrait tonight. I did it. BUT I hate it. and I probably need a few more years befoe I can show it. As is the case with all of these drawings. I may have made them in two minutes or two hours or two days. But it took time for me to be able to show them. This last one feels like me. I donâ&#x20AC;&#x2122;t remember when I drew it. But here is this feeling of breathing in and not letting it out. Or maybe just not even being able to breath in. I really love it. and I dont remember drawing it--like so many of the thigs I make. They matter because I somehow-SORT OFwasnâ&#x20AC;&#x2122;t there. I scanned every self portrait I could find throughout my studio and journals. I arranged them in what I believe to be chronological order ba...

I scanned every self portrait I could find throughout my studio and journals. I arranged them in what I believe to be chronological order ba...