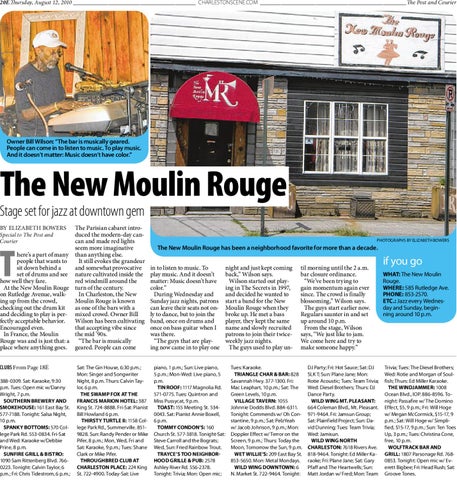 Owner Bill Wilson: “The bar is musically geared. People can come in to listen to music. To play music. And it doesn’t matter: Music doesn’t have color.”

The Parisian cabaret introduced the modern-day cancan and made red lights seem more imaginative here’s a part of many than anything else. It still evokes the grandeur people that wants to and somewhat provocative sit down behind a set of drums and see nature cultivated inside the red windmill around the how well they fare. At the New Moulin Rouge turn of the century. In Charleston, the New on Rutledge Avenue, walkMoulin Rouge is known ing up from the crowd, as one of the bars with a checking out the drum kit and deciding to play is per- mixed crowd. Owner Bill Wilson has been cultivating fectly acceptable behavior. that accepting vibe since Encouraged even. the mid ’90s. In France, the Moulin Rouge was and is just that: a “The bar is musically place where anything goes. geared. People can come

The New Moulin Rouge has been a neighborhood favorite for more than a decade. in to listen to music. To play music. And it doesn’t matter: Music doesn’t have color.” During Wednesday and Sunday jazz nights, patrons can leave their seats not only to dance, but to join the band, once on drums and once on bass guitar when I was there. “The guys that are playing now came in to play one

night and just kept coming back,” Wilson says. Wilson started out playing in The Secrets in 1997, and decided he wanted to start a band for the New Moulin Rouge when they broke up. He met a bass player, they kept the same name and slowly recruited patrons to join their twiceweekly jazz nights. The guys used to play un-

til morning until the 2 a.m. bar closure ordinance. “We’ve been trying to gain momentum again ever since. The crowd is finally blossoming,” Wilson says. The guys start earlier now. Regulars saunter in and set up around 10 p.m. From the stage, Wilson says, “We just like to jam. We come here and try to make someone happy.” 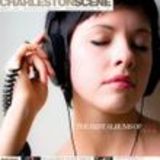