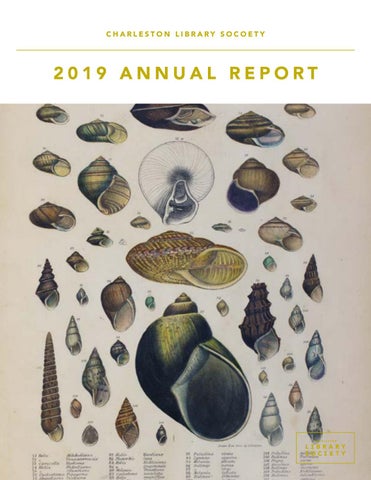 2019 FINANCIAL DISCUSSION For another year, we are pleased to report that the Charleston Library Society is in good financial health. Since its founding in 1748, we have been sustained financially by the generosity of our members. So too, in 2019, as dues and contributions from over 2,590 members totaled over $2,702,454, an increase of 2.4%.

investment and risk policies reviewed annually by the board. We also review performance and management fees regularly. Because we cannot control market fluctuations which will occur from time to time, it is important to spend only a small portion of the endowment from year to year.

The operations of the library are sustained in two ways: (1) operational income and (2) income generated from investment of endowment funds. Together both of these sources again exceeded two million dollars.

Our NEXT CHAPTER campaign came to a very successful conclusion in 2019. We received a total of $6,173,951 in commitments of which $ 5,558,667 have been received to date. The remaining $615,284 are scheduled to be received over the next 34 months. These represent over 450 individual gifts made by our members whose generosity allowed us to complete significant renovations and upgrades to our facilities.

Income from dues, contributions, grants, programs and rentals totaled $3,274,025 â&#x20AC;&#x201C; up 10.7% from 2018. Total expenses less non-cash depreciation were down 1.5% from the prior year. Increases in maintenance, minor equipment and outreach expenses were offset by decreases in restoration costs, compensation and related expenses, lower audit costs and low Next Chapter Fundraising expenses. Disciplined expense management has kept the growth in general and administrative expenses to 2.6%. The second source of revenue results from investment activities in our endowment. The investment portfolio had a total return of $538,643 or 10.9% for a value of $6,210,180 ending calendar year December 31, 2019. The returns are net of investment management fees and after withdrawals of $295,000 used to fund operations for the Library Society. Income from investments was $212,985 and provided significant coverage of our funding needs for the year along with the $422,570 in capital appreciation. The portfolio asset allocation remains in compliance with our investment policy targets of approximately 70% equities and 30% fixed income and cash. Our investments are managed by external advisers and are broadly diversified under

We have a very strong balance sheet with total assets of $12.3 million at Dec 31, 2019 and total liabilities of only $222 thousand. Our total property and equipment has increased to $4.4 million from $2.4 million at year end 2018, reflecting the completion of the majority of our construction projects. The land is carried at a nominal value of $264 thousand. Anne and the staff deserve enormous credit for careful budgeting, running a tight ship, generating increases in dues and contributions, skillfully managing a complex, multifaceted construction project, and prudently taking less from the endowment than permitted. Their stewardship of our collections, operations, physical plant and investment portfolio is exemplary. Overall, 2019 was a successful year for the Library society. Because of the increasingly strong support of our membership, we have grown and our operations have thrived. We will need this continued support in 2020.

extremely volatile financial markets in 2020, the value of our investment portfolio was $6,353,619 on August 31, 2020, up 2.3% from year-end 2019. The Executive Committee has prepared and carefully reviewed mid- and worst-case revised budgets for 2020. At this point we are cautiously optimistic that the negative financial impact in 2020 will only be modest. But the final months of the year are when we receive many of our special gifts. So, maintaining prior yearâ&#x20AC;&#x2122;s levels will be an important factor in determining the ultimate financial impact of the pandemic on the Library Societyâ&#x20AC;&#x2122;s 2020 financials.

Oh how we miss this atmosphere... A bustling crowd of members and patrons before an event in February 2020.

2020 will be a challenging year for the Library Society. The COVID-19 pandemic has negatively impacted our revenues from programs, rental income and special events. We expect this will continue, hopefully to a lesser extent, for the remainder of the year and into 2021. We have adjusted our programs to be on-line and have several plans as to how these can be configured to generate revenue. To date, our few remaining pledges for the Next Chapter campaign have been honored and we have not seen a significant diminution in our dues or special gifts. Anne and her staff have done a careful review of all expenses and have made appropriate reductions where possible. We, like other charitable organizations, applied for and received a Paycheck Protection Program Loan which was extremely beneficial in covering a portion of our revenue shortfall. We are in the process of having this loan cancelled as we meet the criteria for full loan forgiveness. Despite

After many years of ser vice, the Librar y Society continues to operate through the support of friends and members. We are extremely grateful, and we thank ever y person, business, foundation, and organization that contributed to the Charleston Librar y Society during 2018. Ever y gift is appreciated.

Vincent Buonanno I N ME M O RY OF AD RIENNE B. RE IL LY

Anne and Will Cleveland

IN MEMORY OF K AT HY RAV E NE L

Mary Pratt-Thomas Evans IN MEMORY OF RICHARD WELLINGT ON BUR K H ART, I I

IN M EMORY OF D OR OT HEA BENT ON FRANK

HOW TO SUPPORT THE LIBRARY

To join, renew, or increase your membership level, cash gifts may be made online or in person at the Library through credit or debit card transactions, or by check. For online gifts, please visit charlestonlibrarysociety. org. Checks may be mailed to Anne Cleveland, Charleston Library Society, 164 King Street, Charleston, SC 29401. Wire transfers can also be arranged. Some employers will match charitable gifts. In this case, please provide the employer’s matching gifts form to the Library.

Gifts of appreciated securities (such as stocks and bonds) and planned gifts (such as bequests, charitable trusts and gift annuities) may provide additional tax benefits to the donor. Please consult with your financial advisor to determine whether such a gift is advantageous to you. If you decide to make a gift of securities or a planned gift, please notify Doerte McManus at 843-723-9912.

MEMORIAL & TRIBUTE GIFTS Memorial and tribute gifts are a meaningful way to honor or remember people special in your life. The Library will send a letter to the person or his/her family to acknowledge your gift and both the donor and honoree will be recognized in the Library’s annual report.

B O O K D O N AT I O N S Donations of books and other materials may be accepted in accordance with the Library’s Collection Department Policy. Books and printed materials that are not appropriate for the Library’s collections may be sold, with the proceeds used for collections budget. Please contact Laura Mina for more information regarding such a donation. Due to renovation closure, books cannot be donated until after September 9th.

The Charleston Library Society is qualif ied as a Section 501(c)(3) nonprof it organization under the Internal Revenue Code. Therefore, contributions are deductible by the donor to the extent permitted by law. Being a 501(c)(3) nonprof it means that the Library heavily relies on your support. A donation, no matter the size, makes an impact and permits The Charleston Library Society to grow. The Charleston Library Society's 2019 Annual Report. This annual report showcases and thanks all members and donors who have supported the C...

The Charleston Library Society's 2019 Annual Report. This annual report showcases and thanks all members and donors who have supported the C...