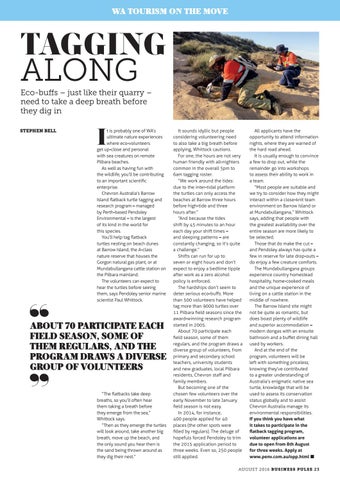 WA TOURISM ON THE MOVE

t is probably one of WA’s ultimate nature experiences where eco-volunteers get up-close and personal with sea creatures on remote Pilbara beaches. As well as having fun with the wildlife, you’ll be contributing to an important scientific enterprise. Chevron Australia’s Barrow Island flatback turtle tagging and research program – managed by Perth-based Pendoley Environmental – is the largest of its kind in the world for this species. You’ll help tag flatback turtles nesting on beach dunes at Barrow Island, the A-class nature reserve that houses the Gorgon natural gas plant, or at Mundabullangana cattle station on the Pilbara mainland. The volunteers can expect to hear the turtles before seeing them, says Pendoley senior marine scientist Paul Whittock.

ABOUT 70 PARTICIPATE EACH FIELD SEASON, SOME OF THEM REGULARS, AND THE PROGRAM DRAWS A DIVERSE GROUP OF VOLUNTEERS “The flatbacks take deep breaths, so you’ll often hear them taking a breath before they emerge from the sea,” Whittock says. “Then as they emerge the turtles will look around, take another big breath, move up the beach, and the only sound you hear then is the sand being thrown around as they dig their nest.”

It sounds idyllic but people considering volunteering need to also take a big breath before applying, Whittock cautions. For one, the hours are not very human friendly with all-nighters common in the overall 5pm to 6am tagging roster. “We work around the tides: due to the inter-tidal platform the turtles can only access the beaches at Barrow three hours before high-tide and three hours after.” “And because the tides shift by 45 minutes to an hour each day your shift times – and sleeping patterns – are constantly changing, so it’s quite a challenge.” Shifts can run for up to seven or eight hours and don’t expect to enjoy a bedtime tipple after work as a zero alcohol policy is enforced. The hardships don’t seem to deter serious eco-buffs. More than 500 volunteers have helped tag more than 9000 turtles over 11 Pilbara field seasons since the award-winning research program started in 2005. About 70 participate each field season, some of them regulars, and the program draws a diverse group of volunteers, from primary and secondary school teachers, university students and new graduates, local Pilbara residents, Chevron staff and family members. But becoming one of the chosen few volunteers over the early November to late January field season is not easy. In 2014, for instance, 400 people applied for 40 places (the other spots were filled by regulars). The deluge of hopefuls forced Pendoley to trim the 2015 application period to three weeks. Even so, 250 people still applied.

All applicants have the opportunity to attend information nights, where they are warned of the hard road ahead. It is usually enough to convince a few to drop out, while the remainder go into workshops to assess their ability to work in a team. “Most people are suitable and we try to consider how they might interact within a close-knit team environment on Barrow Island or at Mundabullangana,” Whittock says, adding that people with the greatest availability over the entire season are more likely to be selected. Those that do make the cut – and Pendoley always has quite a few in reserve for late drop-outs – do enjoy a few creature comforts. The Mundabullangana groups experience country homestead hospitality, home-cooked meals and the unique experience of living on a cattle station in the middle of nowhere. The Barrow Island site might not be quite as romantic, but does boast plenty of wildlife and superior accommodation – modern dongas with an ensuite bathroom and a buffet dining hall used by workers. And at the end of the program, volunteers will be left with something priceless; knowing they’ve contributed to a greater understanding of Australia’s enigmatic native sea turtle, knowledge that will be used to assess its conservation status globally and to assist Chevron Australia manage its environmental responsibilities. If you think you have what it takes to participate in the flatback tagging program, volunteer applications are due to open from 8th August for three weeks. Apply at www.penv.com.au/opp.html ¢ Shining the spotlight on WA's tourism sector with comments from Premier and Minister of Tourism Colin Barnett as well as showcasing some of...

Shining the spotlight on WA's tourism sector with comments from Premier and Minister of Tourism Colin Barnett as well as showcasing some of...