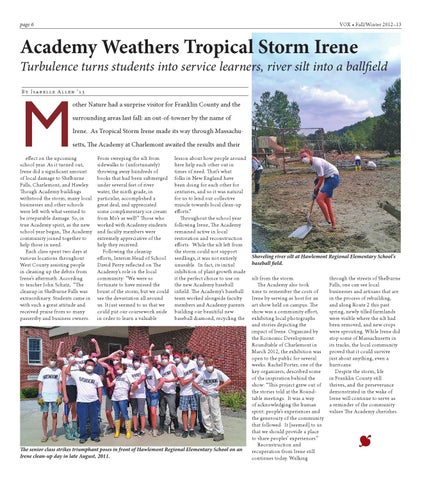 other Nature had a surprise visitor for Franklin County and the surrounding areas last fall: an out-of-towner by the name of Irene. As Tropical Storm Irene made its way through Massachusetts, The Academy at Charlemont awaited the results and their

effect on the upcoming school year. As it turned out, Irene did a significant amount of local damage to Shelburne Falls, Charlemont, and Hawley. Though Academy buildings withstood the storm, many local businesses and other schools were left with what seemed to be irreparable damage. So, in true Academy spirit, as the new school year began, The Academy community joined together to help those in need. Each class spent two days at various locations throughout West County assisting people in cleaning up the debris from Irene’s aftermath. According to teacher John Schatz, “The cleanup in Shelburne Falls was extraordinary. Students came in with such a great attitude and received praise from so many passersby and business owners.

From sweeping the silt from sidewalks to (unfortunately) throwing away hundreds of books that had been submerged under several feet of river water, the ninth grade, in particular, accomplished a great deal, and appreciated some complimentary ice cream from Mo’s as well!” Those who worked with Academy students and faculty members were extremely appreciative of the help they received. Following the cleanup efforts, Interim Head of School David Perry reflected on The Academy’s role in the local community: “We were so fortunate to have missed the brunt of the storm, but we could see the devastation all around us. It just seemed to us that we could put our coursework aside in order to learn a valuable

lesson about how people around here help each other out in times of need. That’s what folks in New England have been doing for each other for centuries, and so it was natural for us to lend our collective muscle towards local clean-up efforts.” Throughout the school year following Irene, The Academy remained active in local restoration and reconstruction efforts. While the silt left from the storm could not support seedlings, it was not entirely unusable. In fact, its initial inhibition of plant growth made it the perfect choice to use on the new Academy baseball infield. The Academy’s baseball team worked alongside faculty members and Academy parents building our beautiful new baseball diamond, recycling the

Shoveling river silt at Hawlemont Regional Elementary School's baseball field. silt from the storm. The Academy also took time to remember the costs of Irene by serving as host for an art show held on campus. The show was a community effort, exhibiting local photographs and stories depicting the impact of Irene. Organized by the Economic Development Roundtable of Charlemont in March 2012, the exhibition was open to the public for several weeks. Rachel Porter, one of the key organizers, described some of the inspiration behind the show: “This project grew out of the stories told at the Roundtable meetings. It was a way of acknowledging the human spirit: people’s experiences and the generosity of the community that followed. It [seemed] to us that we should provide a place to share peoples’ experiences.” Reconstruction and recuperation from Irene still continues today. Walking

through the streets of Shelburne Falls, one can see local businesses and artisans that are in the process of rebuilding, and along Route 2 this past spring, newly tilled farmlands were visible where the silt had been removed, and new crops were sprouting. While Irene did stop some of Massachusetts in its tracks, the local community proved that it could survive just about anything, even a hurricane. Despite the storm, life in Franklin County still thrives, and the perseverance demonstrated in the wake of Irene will continue to serve as a reminder of the community values The Academy cherishes. 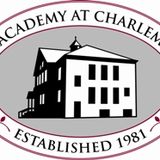 The Academy at Charlemont