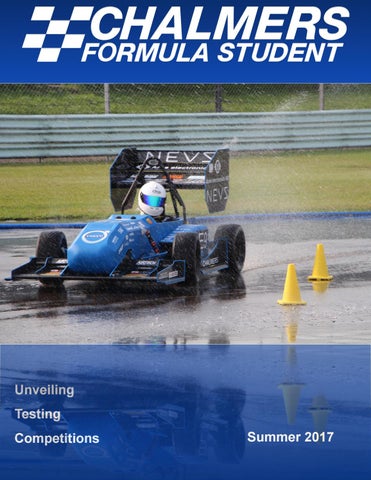 Formula Year In the previous issues we have covered the design and manufacturing stages of the project. In this issue we continue the journey of Formula Student project lifecycle and concentrate on the competition preparations as well as the competitions themselves. As the project is ready for itsâ&#x20AC;&#x2122; closure for the CFS17 team, the recruiting process for the new CFS18 team is about to start.

Team getting ready to unveil the new car...

Unveiling The new CFS car was launched in late May this year at the facilities of Chalmers University of Technology. It has been an extremely busy year with the designing and manufacturing of the car. When we finally assembled parts together the air was filled with excitement. It was great feeling to see a complete car, the result of all the hours spent designing and manufacturing the parts. On the next pages, the highlights of the CFS17 car are introduced, in case you missed last newsletter. It was amazing to see all the interested people attending to our launch of the new car. The event started with a short presentation about our team, project life-cycle and the highlights of the new car. We also took a look back to our history, as the current year is already 15th year of Chalmers Formula Student! After the presentation the team and the audience gathered outside of the presentation hall. Some people had to wait a while to get close to the car, but eventually everyone had a chance to see it. All the team members were also present to have a talk about the car and the project itself with the audience. Overall, the Unveiling Event was extremely successful and we were amazed by the large amount of audience. Thank you for the support and interest! If you happened to miss the unveiling event, we have combined a small video which you can see in our Facebook and YouTube page (search for Chalmers Formula Student - Launch of CFS17).

Large audience was eager to see the new CFS17 car

Testing What makes a competitive car the winning car? -Testing The concept needs to be properly tested & validated. One of the corner stones of successful car is reliability. To be able to win, one must be able to finish the race first. Thatâ&#x20AC;&#x2122;s why only after the car is reliable enough, it is possible to start to fine-tune in order to get the best performance out of the vehicle.

Testing period Spring started with powertrain benching. Having the powertrain on a separate bench eases the process of troubleshooting while the important parameters are being fine tuned. When the powertrain proved to be working correctly, it was installed in the car and the first shakedowns were performed to ensure car was assembled in the right manner. The testing period started with troubleshooting and bug fixing, followed by stress testing and performance validation leading to suspension and torque vectoring tuning. As the testing kilometers grew, so did the confidence in the car’s capability to perform on its edge. Finally, prior the competitions, we concentrated on dynamic event simulations as well as to driver training (as it is not an easy job to drive such a powerful vehicle as CFS17). Thanks to our sponsor Serneke, we have been able to test our car nearly everyday at the nearby Säve City Airport.

Safety checks As safety is one of the most important concerns in CFS, we inspect thoroughly the car every time it gets back from the track. With these checks we are able to not only ensure the safety of drivers and testing group, but also spot possible risk of failures in the car and take the corresponding actions if needed. Mechanical safety check goes through the mechanical parts, ensuring that there is no failures in parts, tightening all the bolts to right torque and checking the brake system. The electrical safety check again goes through the electrical system ensuring that our in-house developed accumulator operates in “safe operating window” (LiCoO2 accumulator has very specific voltage and temperature that it needs to obtain in order to remain safe). Competition rules require electrical system tests, which are quite extensive, and all these are inspected in electrical safety check.

FSN 2017 Formula Student Netherlands Formula Student Netherlands competition was arranged for the first time and it took place 17th 20th of July in TT Circuit Assen, Netherlands. After a long day of travelling we arrived to the competition site a couple of days early to set up the camp and pit as well as to prepare ourselves for the competition. Competition started with the static events; business presentation, cost & manufacturing and design event. We were well prepared for these events, which judges appreciated. They were also impressed about our comprehensive documentation for static events. Rain test

The dynamic events were divided into a period of two days. We started with the acceleration, skidpad and autocross events on the first day. Even if the day was hectic, we were able to get good runs with the car and at the end of the day we had good results from each of the events, as you can see from the final results on the following page. Being successful on the first day gave us confidence and obviously we were aiming for the win at the endurance event on the following day. The endurance event is the most demanding event as teams need to cover a distance of 22 kilometers and really push both the car and the driver to the limits. Tight racing with team Eindhoven in endurance event

Before the endurance event we had more or less the same score with two other top teams in the competition. This meant that the results of the endurance would determine the winner of the overall competition. The weather was somewhat unpredictable as the threat of the rain was present. The rain would be especially problematic as on the track there is only 2-3 cars at the time, and rest of the cars are waiting their turn. Being able to enter the track prior the rain would give enormous competitive advantage. Our slot was rather late, but fortunately we were able to race with dry circumstances. We ran the total distance of 22 kilometers, with one mandatory driver change. Lap times were competitive and during the endurance team Eindhoven really made it to a proper race for us. After finishing the endurance with a good time, we needed to wait until the award ceremony to hear the official final results from the competition. Even if the waiting was nerve-racking, it was worth it as the night was all about Chalmers Formula Student. Total of 8 trophies were handed out to us, including the best electric car. Indeed, there was plenty of reasons to celebrate. The celebrations were well deserved (also for team Valencia, who won the overall class), but the competition in Germany was only two and half weeks away. There is always room for improvements, so after getting back to Gothenburg it was time to start testing and preparations for the next competition again.

Happy team at the sunny circuit of Assen, “The Cathedral of Speed” CFS17

Cars lining up for static events

Competition started with the scrutineering process of the car. Again car needed to pass the accumulator, electrical and mechanical inspection as well as brake, tilt and rain test (although the need for rain test was not that obvious as the weather conditions took care of the rain most of the week). The preparations for the scrutineering paid back as we managed to pass the process rather smoothly, among with the first teams. We were the 15th electric car to enter scrutineering and the 2nd to finish. This gave us a great advantage, as the following days had extremely tight schedule.

Friday was the day when we had our first events; all the static events (design, cost & business presentation) as well as the skidpad event from dynamic events. We started the morning with the skidpad and run the event among the very first teams. We were able to make a competitive time and continued straight to static events. Judges appreciated our design and were pleased with our documentation and knowledge in both cost and design event. Also business presentation convinced the judges and rewarded us with a good score. On Saturday we cleared our runs both in acceleration and autocross event. Being able to make a good time in autocross event is important as it determines the starting order for the endurance event.

The main event, endurance, took place on Sunday. As we were quite successful at autocross event we were able to start on the afternoon stint and avoid the rain that was present during the morning. Endurance event is a hard challenge both the combustion and electrical cars. Cars need to cover a distance of 22 kilometers and not all cars that start the event are able to finish it for various different reasons. Again the notorious “bump” claimed its’ victims as one of the Spanish teams broke their front suspension to that speed bump that is part of the track. We didn’t have any issues with the bump as we learnt from last year and the safety margin was taken in consideration during the design of suspension system. Even with some unfortunate stops we were able to finish the endurance with a 10th best time. By making a steady and solid result in each event we were able to gather altogether 555,83 points. It was enough to take the 6th place in the overall competition in electric class. It is an outstanding achievement in a competition with a such high level. To summarize the competition results it can be said that the car showed its’ potential as well as the team its’ capabilities to work as a one group for a common goal and really challenge the top teams of the world. FSG was the last competition of the season and the CFS17 team. After the competition, it was time for us to travel back home to Gothenburg and prepare for the new team to take over and hopefully continue the success of previous years to take place among the top teams in the electric class.

CFS17 thanks You for the support!

This year has been a roller coaster ride that reached the exiting end at the competitions in FSN and FSG. In both competitions we were able to achieve extremely good results and this is because of the support that our team has received from all the sponsors and partners. We are proud to have all the sponsor logos in our car and provide the visibility at the competitions and fairs. Hopefully we can continue cooperation with the new CFS18 team and reach similar results.

Recruitment process for CFS18 As almost whole team changes each year, it is time to start the recruitment of CFS18 team. The application period is from 24th of August to 7th of September, and during this time the application form will be available on our web page. 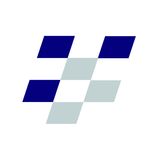