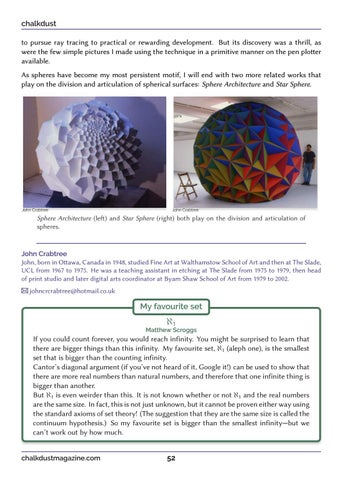 chalkdust to pursue ray tracing to practical or rewarding development. But its discovery was a thrill, as were the few simple pictures I made using the technique in a primitive manner on the pen plo er available. As spheres have become my most persistent motif, I will end with two more related works that play on the division and articulation of spherical surfaces: Sphere Architecture and Star Sphere.

Sphere Architecture (le ) and Star Sphere (right) both play on the division and articulation of spheres.

John Crabtree John, born in O awa, Canada in 1948, studied Fine Art at Walthamstow School of Art and then at The Slade, UCL from 1967 to 1975. He was a teaching assistant in etching at The Slade from 1975 to 1979, then head of print studio and later digital arts coordinator at Byam Shaw School of Art from 1979 to 2002. johncrcrabtree@hotmail.co.uk

If you could count forever, you would reach infinity. You might be surprised to learn that there are bigger things than this infinity. My favourite set, ℵ1 (aleph one), is the smallest set that is bigger than the counting infinity. Cantor’s diagonal argument (if you’ve not heard of it, Google it!) can be used to show that there are more real numbers than natural numbers, and therefore that one infinite thing is bigger than another. But ℵ1 is even weirder than this. It is not known whether or not ℵ1 and the real numbers are the same size. In fact, this is not just unknown, but it cannot be proven either way using the standard axioms of set theory! (The suggestion that they are the same size is called the continuum hypothesis.) So my favourite set is bigger than the smallest infinity—but we can’t work out by how much. chalkdustmagazine.com 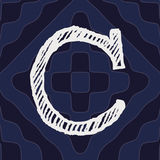