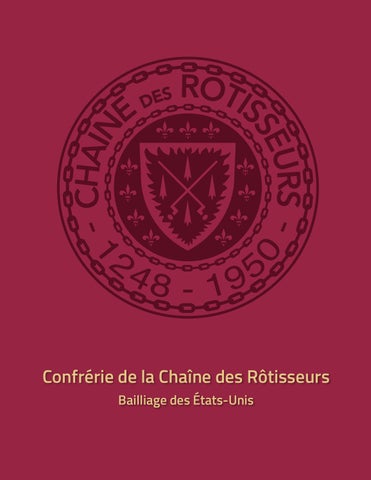 A global community whose focus is conviviality, friendship, camaraderie and sharing a passion for the culinary arts

“The Chaîne des Rôtisseurs invites all lovers of gastronomy, good food and fine wines to share its values of excellence and camaraderie, uniting us in the continuation of great culinary traditions”

from the Bailli Délégué Ladies and Gentlemen, Dear Confrères and Friends To Be, The Bailliage des Etats-Unis of the Chaîne des Rôtisseurs invites all of those who enjoy camaraderie, excellent food and fine wine to share its values of excellence that unite us in the continuation of great culinary traditions. Our august society brings together enthusiasts and professionals from throughout the United States, and the Caribbean, Atlantic and Pacific islands in the appreciation of fine cuisine. Among its members are hoteliers, restaurateurs, executive chefs, winery owners, vintners, sommeliers, those making crafted beverages, hospitality professionals and individuals passionate about the culinary and œnological arts and hospitality. Annually we run competitions to find the Best Young Chefs and Best Young Sommeliers in the Bailliages of the United States. These competitions were created to encourage and develop the skills and “know-how” of young chefs and young sommeliers. This “succession planning” is an important goal of the Chaîne des Rôtisseurs as we develop new chef and sommelier talent. To that end the Chaine has a 501(c)(3) Foundation that has raised and distributed almost $4,000,000 in scholarships to nurture this talent. With almost 6,000 members in about 125 Bailliages (chapters), we bring together enthusiasts who share the same values for fine dining, the enjoyment of the culinary arts, wonderful wines and crafted beverages, and the pleasures of the table. We are part of a worldwide organization with more than 23,000 members in 80 countries. Each Bailliage hosts local dinners and tastings for its members and, upon becoming a member, you will be able to participate in these one of a kind exceptional events. You will find many opportunities and friendship within our Chaîne family. We invite you to join us and be welcomed as part of our international community.

History 1248 Louis IX, the French King later canonized as Saint Louis, ordered the establishment of several professional guilds including that of the “Ayeurs” or goose roasters. The purpose of this guild was to improve the technical knowledge of its members: apprentices, tradesmen and masters.

Creation of the Coat of Arms: It featured two crossed spits and four larding utensils in the center, surrounded by the flames of the hearth. In today’s version, this historic emblem is encircled by fleurs-de-lys and two chains with the new name of the association in between. The inner chain represents the professional members, while the outer chain symbolizes the nonprofessional members.

During the reign of Louis XII, the guild’s knowledge was extended to include the preparation of other meats and poultry, including game, and it took the name “Rôtisseurs”.

For more than four centuries the Confrérie des Rôtisseurs cultivated and developed the culinary arts. It met all the requirements of professionalism demanded by the “Royal Table”, until 1793 when the guild system was dissolved during the French Revolution.

The Chaîne des Rôtisseurs, Bailliage des États-Unis, or United State Bailliage, was founded to carry on the established traditions.

The Bailliage des ÉtatsUnis formed the Chaîne Foundation, a taxexempt organization, with a goal and a

Many of our members have a special interest in wine as collectors, producers, and those learning more

purpose of providing scholarships to deserving culinary and oenological students. The Foundation’s grants to these students provide welcome financial aid to our young confrères and consœurs who will someday be staffing the restaurants and hotels we enjoy during our Chaîne and Mondiale events.

about wine or other crafted beverages. To accommodate those members, the Société Mondiale du Vin (“Mondiale”) was created to promote the enjoyment, knowledge and understanding of fine wines and crafted beverages.

TODAY La Chaîne des Rôtisseurs – International Association of Gastronomy is a truly international society constantly developing and expanding. In the United States, there are almost 6,000 members in about 125 bailliages (chapters) across the country, each offering a variety of culinary activities to suit the interests of local members.

Florida except the Panhandle

Values I shall always honor the art of cuisine and the culture of the table and I shall always fulfill my obligations of camaraderie and of respect for my fellow members.

Through such support and activities, the Bailliage des États-Unis maintains its heritage, philosophy and charitable work. The values of the Chaîne are many and demonstrate a commitment to:

1. Preserve the camaraderie and pleasure of the table

2. Promote excellence in all areas of hospitality

3. Encourage the development of young chefs and sommeliers

5. Be one of the key players in the transmission of knowledge 6. Provide scholarships to deserving culinary and oenological students 7. Develop training in the Hospitality and Food &amp; Beverage industries

Organization All members are welcome at international, national, regional and local events. These are exceptional occasions to come together, interact, network and create new bonds of friendship.

The Chaîne des Rôtisseurs was created under the 1901 French law regarding Associations with an International Headquarters based in Paris. At its head is a President with a Secretary General and a Board of Directors. The day to day running is organized by National, Provincial and Local Bailliages. The Bailliage des États-Unis is managed by its Bailli Délégué (National President), assisted by its Board of Directors and an Executive Director, with the local Bailliages

maintained by the Bailli and local officers. New members to a local Bailliage are inducted at the annual Induction Dinner, with each event representing a true celebration of the Chaîne values. Members wear ribbons at such events which denote their level of membership, whether Professional or Non-professional. Because the Chaîne is a worldwide organization, members are welcome to attend events anywhere they travel.

Société Mondiale du Vin For members wishing to promote and further their interest in the enjoyment, knowledge and understanding of fine wines and crafted beverages, the Société Mondiale du Vin was founded to provide the opportunity to grow and expand on this fascination within dinners and tastings. One of its primary goals is to provide help, encouragement and support for the young professionals who are to be the best sommeliers of the future.

Chaîne membership status is recognized internationally and is transferable worldwide.

Membership in the Chaîne des Rôtisseurs is by personal invitation. Belonging to a truly international community brings a wealth of opportunities for members to participate in exciting events worldwide. These events, organized by national or local Bailliages, bring together people with a mutual interest in and passion for good food, conviviality and camaraderie.

The benefits of a national membership include access to the international camaraderie, attendance at extraordinary dinners in your community and throughout the world, gourmet travel offerings at home and abroad, an opportunity to represent the U.S. Chaîne as an ambassador of goodwill, recognition as a member in Paris, and a worldwide network of professional and gastronome members.

The Benefits Prestigious international organization enjoying recognition in the culinary world. Unique combination of Professionals and Non-professionals. Subscription to Gastronome and Gastronome Extra!, the official publication and e-publication of the U.S Chaîne des Rôtisseurs. The magazine provides coverage of local, regional, national and some international Chaîne events as well as feature stories about members and member establishments. Access to global network of friends and colleagues with high level of camaraderie. Special welcome at Professional member restaurants and hotels. Participate in unique gourmet events worldwide throughout the year. Chapitre events with organized cultural visits, excursions and private guided tours. Meet renowned chefs and vintners who are Chaîne members. Contribute your expertise and knowledge to the organization of the Chaîne. Join the Société Mondiale du Vin to promote the education, understanding and enjoyment of fine wines and crafted beverages. Participate in and contribute to the charitable activities and programs of The Chaîne Foundation, the official charity of the Bailliage des États-Unis. Opportunity to take part in the Chaîne Ambassador Program, a unique opportunity for members to represent the United States Bailliage at international Chaîne functions and to meet foreign confrères. Opportunity to participate in Travel Programs, specifically planned programs created for members only. Previous programs have included cruises, land-based excursions, as well as the regional and national events that involved special opportunities for members. The annual Revue Internationale de la Chaîne des Rôtisseurs of the international organization.

Provides a worldwide forum in which professional excellence is recognized.

Opportunities for host venues to showcase their exceptional culinary and service skills.

Partnership in raising standards for service and food higher and higher.

Sharing creativity and innovation by pushing beyond what has been.

Upon induction, each professional

member receives a plaque to be

ancient guild of rôtisseurs, our society

displayed within their establishment,

has established a series of distinctive

serving as a proclamation of excellence

in food and service.

coming from the kitchens of member

In keeping with the traditions of the

Our full-color Gastronome and

Chefs Competition, there will be no age

on outstanding events held around the

the Society, sponsors an annual competition

A geolocation map is available on our

offers the opportunity to showcase

exceptional skills and creativity for an

Through its special tax-exempt foundation

and in conjunction with the major culinary

the United States. Unlike the Young

teaching institutions, the Confrérie provides significant help to students of the hospitality and culinary and viticultural arts.

international website to promote our professionals and their establishments.

Our goal is to encourage the cultural differences in food &amp; wine presentation and preparation using a traditional approach and be a major player in the transmission of knowledge.

Young Chefs Competition The Young Chefs Rôtisseurs Competition first competition was organized and first held in 1977 in Switzerland to support and promote future young chefs by giving them the opportunity to demonstrate their advanced skills. Competitions are held at regional, national and international levels in countries around the world with a strong Chaîne community presence. The United States competition

began in 1990 and continues to grow every year and has been featured on the Food Network and CNN. In 2011, the winner of the U.S. Competition went on to win the International Young Chef Competition organized by the Confrérie de la Chaîne des Rôtisseurs.

Sponsored by the SociĂŠtĂŠ Mondiale du Vin, this annual competition for young ChaĂŽne-sponsored wine professionals provides participants with the opportunity to display their knowledge on wine, crafted beverages and wine service. With blind tastings, table service and a written test as components of the competition, regional winners go on to compete in a national finals competition where the winner then moves forward to compete in the international round, pitted against other national young sommelier winners from all over the world. The United States National Young Sommelier of the Year in 2011 went on to win gold at the Young Sommeliers International Competition. That is the only time both competitions were won by the same country in the same year.

A global community whose focus is conviviality, friendship, camaraderie and sharing a passion for the culinary arts. 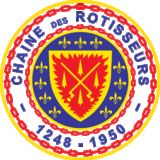