Tahoe Through the Ages 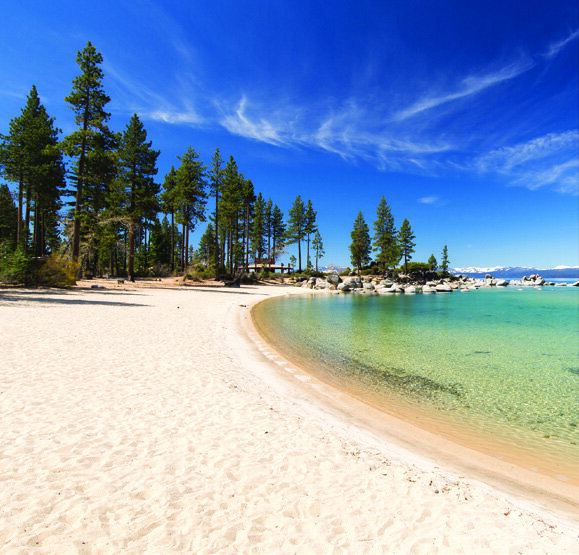 The first inhabitants of the Tahoe region were the Washoe, Maidu and Paiute Native American tribes. Three bands of the Washoe tribe summered along the Tahoe shoreline, hunting, fishing, and collecting medicinal plants. They were master basket weavers, creating practically water-tight containers (examples are on display at Gatekeeper’s Museum in Tahoe City).

The first European explorers of the region included “mountain men” trappers aided by the largely peaceful Washoe. But all the region’s tribes were soon to be over-whelmed by thousands of prospectors and settlers drawn to the Sierra by the California Gold Rush and Comstock Lode silver strike. While the Washoe continued to spend summers at Tahoe into the 20th Century, they were soon forced onto reservation land near Carson City, only gaining a presence back at their “Lake of the Sky” early in the late 1990s with the Tribe’s lease of Meeks Bay Resort and access to ceremonial grounds at Skunk Harbor on the East Shore.

The discovery of the Comstock Lode spelled disaster for Tahoe’s forests too, old-growth trees clear-cut to provide timber supports for mining tunnels in Virginia City, NV. Elaborate flumes and rail systems transported the logs over the East Shore mountains toward the mines, their evidence still visible on the “scars” on the mountainside above Sand Harbor State Park. The immense wealth of the Comstock Lode (its silver helped finance the Union’s victory in the Civil War) helped create opulent summer resorts at Tahoe City, Brockway Springs, Glenbrook and present-day Tallac Historic Site. A narrow-gauge railway connected the trans-continental rail tracks in Truckee with Tahoe Tavern Hotel & Casino in Tahoe City, the rails extending onto a pier where passengers unloaded only steps from Steamer Tahoe and other “launches,” carrying them to resorts around the lake.

Between World Wars, Tahoe’s fame continued to grow. CalNeva Resort Casino opened at Crystal Bay in 1926 and attracted the rich and famous of the day. Frank Sinatra purchased the CalNeva in 1960 and often hosted his “Rat Pack” buddies Dean Martin, Sammy Davis Jr., and others (including Marilyn Monroe and Bobby Kennedy who, according to unsubstantiated rumors, used its hidden tunnels for a tryst). The CalNeva was more recently purchased by software billionaire, Larry Ellison, but has remained closed to the public.

This story is from:
Lake Tahoe Visitor Guide Summer/Fall 2022
by C2M Media