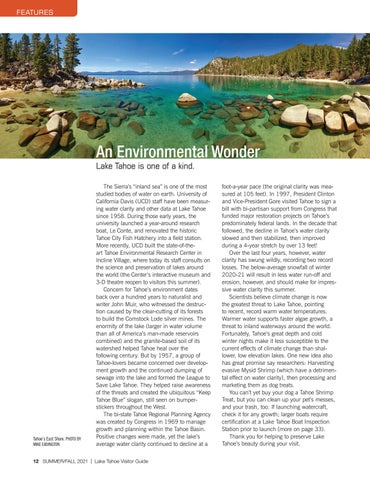 An Environmental Wonder Lake Tahoe is one of a kind.

The Sierra’s “inland sea” is one of the most studied bodies of water on earth. University of California Davis (UCD) staff have been measuring water clarity and other data at Lake Tahoe since 1958. During those early years, the university launched a year-around research boat, Le Conte, and renovated the historic Tahoe City Fish Hatchery into a field station. More recently, UCD built the state-of-theart Tahoe Environmental Research Center in Incline Village, where today its staff consults on the science and preservation of lakes around the world (the Center’s interactive museum and 3-D theatre reopen to visitors this summer). Concern for Tahoe’s environment dates back over a hundred years to naturalist and writer John Muir, who witnessed the destruction caused by the clear-cutting of its forests to build the Comstock Lode silver mines. The enormity of the lake (larger in water volume than all of America’s man-made reservoirs combined) and the granite-based soil of its watershed helped Tahoe heal over the following century. But by 1957, a group of Tahoe-lovers became concerned over development growth and the continued dumping of sewage into the lake and formed the League to Save Lake Tahoe. They helped raise awareness of the threats and created the ubiquitous “Keep Tahoe Blue” slogan, still seen on bumperstickers throughout the West. The bi-state Tahoe Regional Planning Agency was created by Congress in 1969 to manage growth and planning within the Tahoe Basin. Positive changes were made, yet the lake’s average water clarity continued to decline at a

foot-a-year pace (the original clarity was measured at 105 feet). In 1997, President Clinton and Vice-President Gore visited Tahoe to sign a bill with bi-partisan support from Congress that funded major restoration projects on Tahoe’s predominately federal lands. In the decade that followed, the decline in Tahoe’s water clarity slowed and then stabilized, then improved during a 4-year stretch by over 13 feet! Over the last four years, however, water clarity has swung wildly, recording two record losses. The below-average snowfall of winter 2020-21 will result in less water run-off and erosion, however, and should make for impressive water clarity this summer. Scientists believe climate change is now the greatest threat to Lake Tahoe, pointing to recent, record warm water temperatures. Warmer water supports faster algae growth, a threat to inland waterways around the world. Fortunately, Tahoe’s great depth and cold winter nights make it less susceptible to the current effects of climate change than shallower, low elevation lakes. One new idea also has great promise say researchers: Harvesting evasive Mysid Shrimp (which have a detrimental effect on water clarity), then processing and marketing them as dog treats. You can’t yet buy your dog a Tahoe Shrimp Treat, but you can clean up your pet’s messes, and your trash, too. If launching watercraft, check it for any growth; larger boats require certification at a Lake Tahoe Boat Inspection Station prior to launch (more on page 33). Thank you for helping to preserve Lake Tahoe’s beauty during your visit.

The Tahoe/Reno region's leading visitor information publication, available at over 300 locations, conveying messages on stewardship for the area's unique environment and information on activities, popular sites, local communities, dining and shopping, and the "lords of the forest," Tahoe's resident Black Bears. 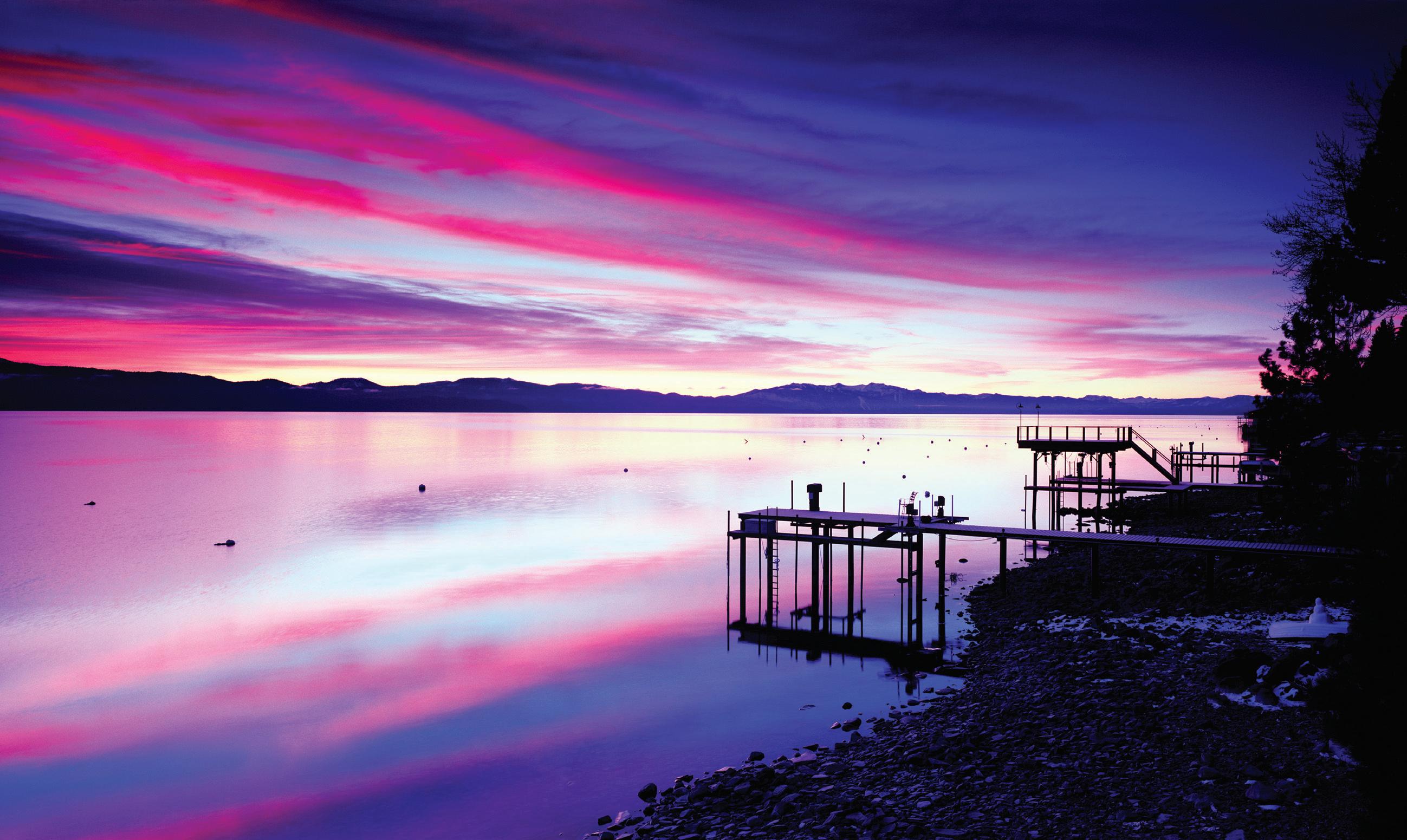 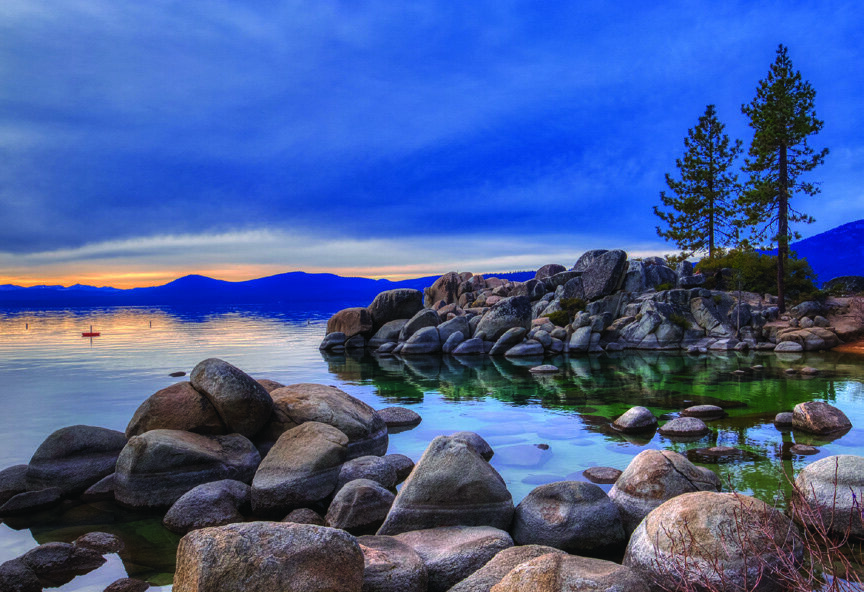 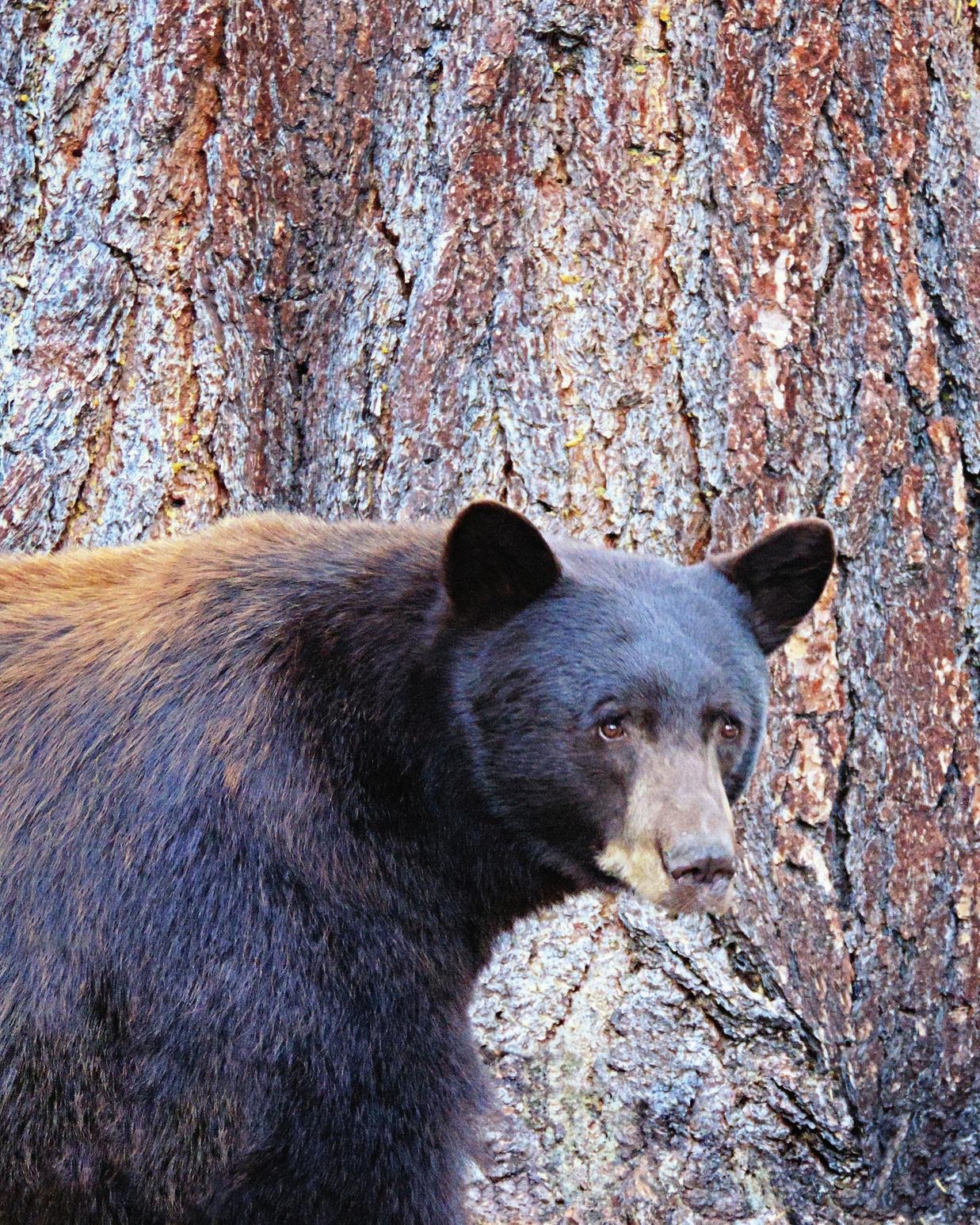 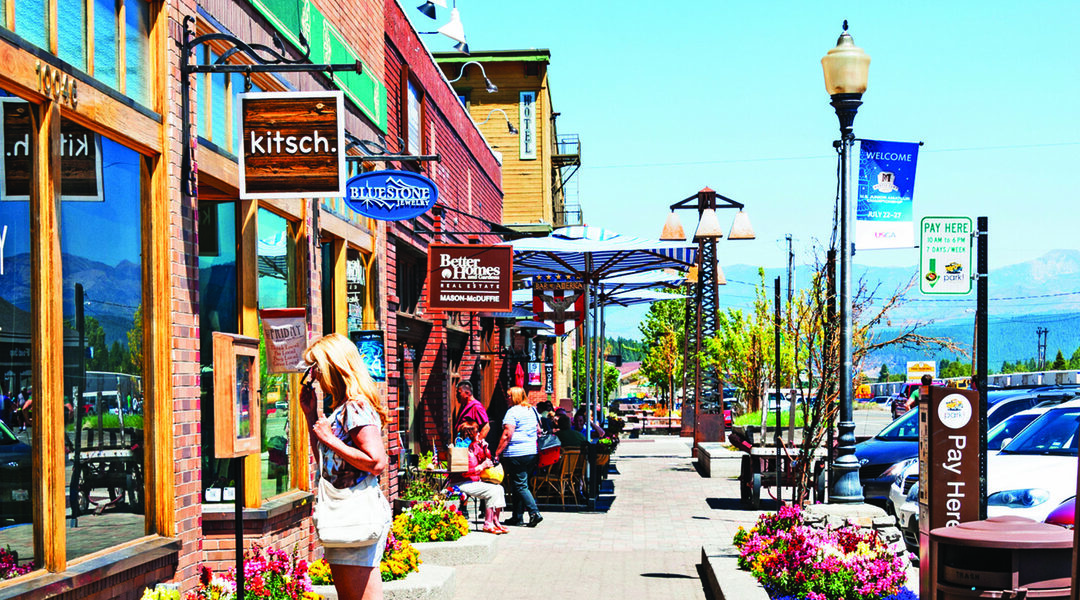