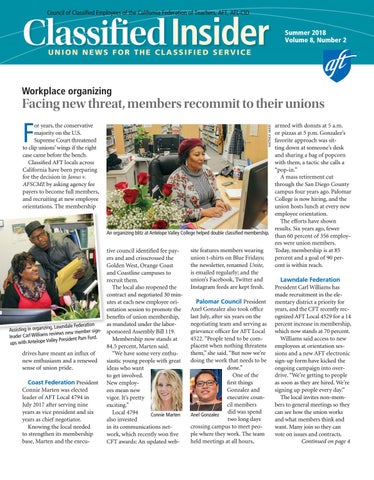 Council of Classified Employees of the California Federation of Teachers, AFT, AFL-CIO

UNION NEWS FOR THE CLASSIFIED SERVICE

armed with donuts at 5 a.m. or pizzas at 5 p.m. Gonzalez’s favorite approach was sitting down at someone’s desk and sharing a bag of popcorn with them, a tactic she calls a “pop-in.” A mass retirement cut through the San Diego County campus four years ago. Palomar College is now hiring, and the union hosts lunch at every new employee orientation. The efforts have shown results. Six years ago, fewer An organizing blitz at Antelope Valley College helped double classified membership. than 60 percent of 356 employees were union members. site features members wearing Today, membership is at 85 tive council identified fee payunion t-shirts on Blue Fridays; percent and a goal of 90 perers and and crisscrossed the the newsletter, renamed Unite, cent is within reach. Golden West, Orange Coast is emailed regularly; and the and Coastline campuses to union’s Facebook, Twitter and Lawndale Federation recruit them. Instagram feeds are kept fresh. President Carl Williams has The local also reopened the made recruitment in the elecontract and negotiated 30 minPalomar Council President mentary district a priority for utes at each new employee oriAnel Gonzalez also took office years, and the CFT recently recentation session to promote the last July, after six years on the ognized AFT Local 4529 for a 14 benefits of union membership, negotiating team and serving as percent increase in membership, as mandated under the laborn tio era g, Lawndale Fed Assisting in organzin nsig grievance officer for AFT Local er which now stands at 70 percent. sponsored Assembly Bill 119. mb me w ne reviews leader Carl Williams Ford. m Pa 4522. “People tend to be comt Williams said access to new Membership now stands at en sid Pre y lle ups with Antelope Va placent when nothing threatens employees at orientation ses84.5 percent, Marten said. them,” she said. “But now we’re drives have meant an influx of sions and a new AFT electronic “We have some very enthudoing the work that needs to be sign-up form have kicked the new enthusiasm and a renewed siastic young people with great done.” sense of union pride. ongoing campaign into overideas who want One of the drive. “We’re getting to people to get involved. first things Coast Federation President New employas soon as they are hired. We’re Gonzalez and Connie Marten was elected signing up people every day.” ees mean new executive counleader of AFT Local 4794 in The local invites non-memvigor. It’s pretty cil members July 2017 after serving nine bers to general meetings so they exciting.” did was spend years as vice president and six can see how the union works Local 4794 Anel Gonzalez Connie Marten two long days years as chief negotiator. and what members think and also invested crossing campus to meet peoKnowing the local needed want. Many join so they can in its communications netple where they work. The team to strengthen its membership vote on issues and contracts. work, which recently won five held meetings at all hours, Continued on page 4 base, Marten and the execuCFT awards: An updated webor years, the conservative majority on the U.S. Supreme Court threatened to clip unions’ wings if the right case came before the bench. Classified AFT locals across California have been preparing for the decision in Janus v. AFSCME by asking agency fee payers to become full members, and recruiting at new employee orientations. The membership

A.J. FRAZIER is a familiar face around San Francisco’s Lowell High School. Frazier has helped guard the campus for the last 15 years, after patrolling Mission High for 15 years. Few people knew about the pain the outgoing ex-Marine carried inside — until he shared it at a recent rally in Santa Ana’s Centennial Park responding to the deadly shooting at Florida’s Marjory Stoneman Douglas High. “No one should ever have to go to the police department to identify their child,” Frazier told 5,000 students, teachers and supporters at the March for Our Lives rally. “I never knew the man my son was meant to be.” Frazier recounted how his 12-year-old son Keith was sitting in a parked car with his stepbrother, then 17, in front of their home about a dozen years ago. Gunfire riddled the vehicle and both youths were shot, but

A school security guard lives with the loss of his son

A.J. Frazier spoke about the pain of losing his 12-year-old son to gun violence.

the child was hit seven times in the head and died. “It took me awhile to make any sense of the incident,” he recalled later. “I had murder in

strength. My job is to help as many students as I can.” The veteran supports what he called “obvious” gun control measures, including more

“These are kids. Treat then with respect and they will show respect to others” — A.J. Frazier, Security Guard, United Educators of San Francisco

my mind, but I needed to keep my composure. Being back at work with the kids gave me

extensive background checks on gun buyers, and is warming to the idea of raising the

minimum age to buy a gun from 18 to a more mature 20-something. Frazier is a member of United Educators of San Francisco, and currently serves as sergeant-at-arms. Fellow executive board member Anabel Ibañez said she could see how Frazier’s words moved people at the rally, including delegates to CFT Convention. “A.J. really understands what gun violence has done to our schools and communities, and I hope that talking about this terrible experience was empowering for him,” Ibañez said. Frazier — who does not carry a gun at work — said violence is not common on campus, although neighborhood gang conflicts and mental health issues can spark dramatic situations. “These are kids,” he said. “Treat them with respect and they will show respect to others.”

Compton campus police choose AFT as their union GENERATIONS OF COMPTON rappers have created an indelible portrait of their city’s mean streets. Life in this Los Angeles suburb isn’t easy. Jermaine Ford and the 17 members of the Compton Unified School District police are a “thin blue line” sworn to keep the 36 schools and additional dozen district facilities safe. Their job hasn’t gotten any easier, either. The force once had twice as many personnel, and salaries have barely moved for those who remain. The state of California recognizes Compton as a post-certified police department, but it had 36 officers before a new chief began budget cuts about six years ago. Management has been so unresponsive that officers have worked eight years without a contract. Compton officers recently voted unanimously to affiliate with the AFT/CFT, and Ford expects to speak with a stronger voice when he returns to the bargaining table as head of the Federation’s 2  Classified Insider Summer 2018

newest California local. Pay raises are the local’s top priority. Additional proposals include amending the insurance for patrol cars to cover accidents while Jermaine Ford, left, with fellow police offi officers are on cers on the Compton force. duty, not just responding to an emergency. The new local looks forward to negotiating a strong new contract.

THE MAYOR in marriage, of San Francisco family, recently recognized and child 10 public school counseling educators for their at San dedication and Francisco professionalism. State Honorees were University. selected based The Mary Lavalais on their ability native San to promote Franciscan innovative learning, began working in early accountability, and equity childhood development in and access in the classroom 1970 and joined the unified and school site. district as a student advisor The 2018 awards included in 1986. Lavalais has been at the mayor’s first-ever the S.F. Community School Paraeducator of the Year. since 2000 and represents Mary Lavalais attended instructional aides on the City College and earned a executive board of her union, bachelor’s degree in social United Educators of San work and a graduate degree Francisco.

THE ANTELOPE VALLEY Federation awarded six scholarships at a May 18 event sponsored by the college foundation. High school seniors Star Collins and Amanda Martinez each received $500 from the Karen Curtis Scholarship, which the AFT Local 4683 created to honor one of the union’s driving forces, CFT Field Representative Karen Curtis. Curtis died Feliz Vasquez in 2016, a year after retiring. Her sister Leslie, also a union rep, and who originally encouraged “K.C.” to become a union activist, presented this year’s awards. “K.C. did most of our early training, negotiated our first contract…all of that,” said President Pamela Ford. “She was so inspirational for us.” Local 4683 awarded another of its $500 scholarships to member Felix Vasquez, a

clerical assistant who is seeking a degree in small business management. Vasquez was a journeyman mason for 15 years and member of the Cement Masons Union. His dad was a member for 25 years. “It was through my dad that I was introduced to all the benefits unions can offer their members,” Vasquez said. “I believe unions give representation to any member who needs it so that they can keep working, unaffected and unafraid.”

equali y We hope to see you in Millbrae! » Learn more at cft.org/ your-work/classified/ conference.

AT OUR ANNUAL conference, you can catch up on current issues, gear up for the General Election, attend workshops on professional topics, network with your colleagues and have some fun. This year’s event will be held October 19-21 at The Westin San Francisco Airport in Millbrae. Scholarships are available to members from small locals and to members from locals who are attending the conference for the first time. Learn more about the scholarships online, where you can also register to attend the conference.

FRAMED ON INSTAGRAM! According to Danielle Short, classified vice president for San Diego’s AFT Guild, the local was looking for ways to make campus tabling more dynamic and encourage more conversation with members. A brainstorming session led to the idea of a giant photo frame. Campus printing services helped create the frame and printed it. “We used it for our tabling,” Short said. “And then we just ran with it for other events and outreach. It definitely breaks the ice — and it’s a lot of fun.” »Find the local on Instagram at @aftguild1931.

Anticipating financial pressure from the Janus v. AFSCME ruling, the CFT will end print newsletters and switch to online publication only. Sign up now to receive Classified Insider by email. Keep getting the union news! And remember to follow us on Facebook and Twitter.

Get the latest from CFT

“Non-members know we negotiate the contract that brings us all better working conditions and salaries.” Williams also led efforts to organize part-time personnel who care for students before and after class, and on playgrounds. “Noon dutys” are mainly Latinas and are often the lowest paid staff on campus. A new law that expands classified service to include “noon dutys” went into effect in January, and the local is holding meetings to inform employees of their new rights. “Noon dutys don’t need to pass probation before joining the union,” Williams said. “Why should they wait to vote on a contract?”

Antelope Valley Federation President Pamela Ford said the Janus case created an urgency among AFT Local 4683 members to get active. “Now members constantly come by my office and ask what they can do, how they can help.” In its current organizing campaign, Antelope Valley has more than doubled its ranks on campus and is aiming for

80 percent membership. Ford credited the growth spurt to a team of CFT organizers that “set up a table in front of the bookstore and went around campus with our officers to convince members to join.” Local 4683 is currently negotiating salary, benefits, and union access to new employees during orientation.

of the Coast Federation wea r their union shirts.