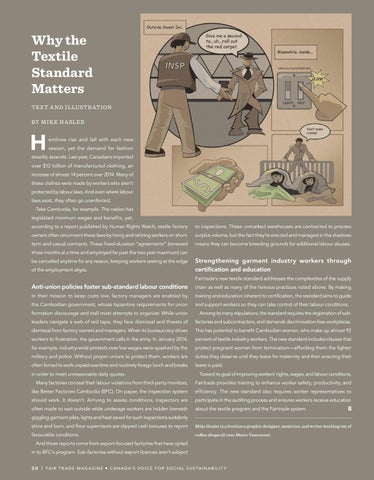 emlines rise and fall with each new season, yet the demand for fashion

steadily ascends. Last year, Canadians imported over $12 billion of manufactured clothing, an increase of almost 14 percent over 2014. Many of these clothes were made by workers who aren’t protected by labour laws. And even where labour laws exist, they often go unenforced. Take Cambodia, for example. The nation has legislated minimum wages and benefits, yet, according to a report published by Human Rights Watch, textile factory

to inspections. These unmarked warehouses are contracted to process

surplus volume, but the fact they’re erected and managed in the shadows

means they can become breeding grounds for additional labour abuses.

three months at a time and employed far past the two year maximum) can be cancelled anytime for any reason, keeping workers sewing at the edge of the employment abyss.

chain as well as many of the heinous practices noted above. By making

In their mission to keep costs low, factory managers are enabled by

training and education inherent to certification, the standard aims to guide

the Cambodian government, whose byzantine requirements for union

and support workers so they can take control of their labour conditions.

formation discourage and stall most attempts to organize: While union

Among its many stipulations, the standard requires the registration of sub-

leaders navigate a web of red tape, they face dismissal and threats of

dismissal from factory owners and managers. When its bureaucracy drives

This has potential to benefit Cambodian women, who make up almost 92

workers to frustration, the government calls in the army. In January 2014,

for example, industry-wide protests over low wages were quashed by the

protect pregnant women from termination—affording them the lighter

military and police. Without proper unions to protect them, workers are

Toward its goal of improving workers’ rights, wages, and labour conditions,

Many factories conceal their labour violations from third-party monitors,

like Better Factories Cambodia (BFC). On paper, the inspection system

should work. It doesn’t. Arriving to assess conditions, inspectors are

participate in the auditing process and ensures workers receive education

often made to wait outside while underage workers are hidden beneath

about the textile program and the Fairtrade system.

giggling garment piles, lights and heat saved for such inspections suddenly shine and burn, and floor supervisors are slipped cash bonuses to report

Mike Hasler is a freelance graphic designer, musician, and writer working out of

coffee shops all over Metro Vancouver. 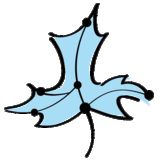