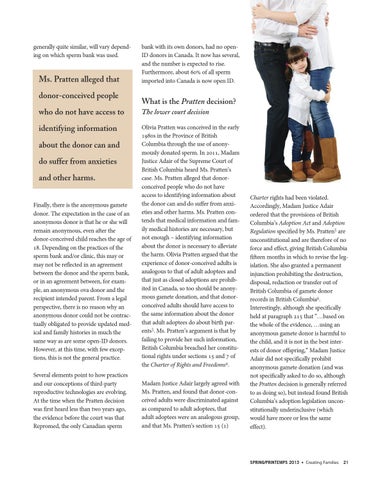 generally quite similar, will vary depending on which sperm bank was used.

bank with its own donors, had no openID donors in Canada. It now has several, and the number is expected to rise. Furthermore, about 60% of all sperm imported into Canada is now open ID.

What is the Pratten decision?

Olivia Pratten was conceived in the early 1980s in the Province of British Columbia through the use of anonymously donated sperm. In 2011, Madam Justice Adair of the Supreme Court of British Columbia heard Ms. Pratten’s case. Ms. Pratten alleged that donorconceived people who do not have access to identifying information about the donor can and do suffer from anxieties and other harms. Ms. Pratten contends that medical information and family medical histories are necessary, but not enough – identifying information about the donor is necessary to alleviate the harm. Olivia Pratten argued that the experience of donor-conceived adults is analogous to that of adult adoptees and that just as closed adoptions are prohibited in Canada, so too should be anonymous gamete donation, and that donorconceived adults should have access to the same information about the donor that adult adoptees do about birth parents3. Ms. Pratten’s argument is that by failing to provide her such information, British Columbia breached her constitutional rights under sections 15 and 7 of the Charter of Rights and Freedoms4.

about the donor can and do suffer from anxieties and other harms. Finally, there is the anonymous gamete donor. The expectation in the case of an anonymous donor is that he or she will remain anonymous, even after the donor-conceived child reaches the age of 18. Depending on the practices of the sperm bank and/or clinic, this may or may not be reflected in an agreement between the donor and the sperm bank, or in an agreement between, for example, an anonymous ova donor and the recipient intended parent. From a legal perspective, there is no reason why an anonymous donor could not be contractually obligated to provide updated medical and family histories in much the same way as are some open-ID donors. However, at this time, with few exceptions, this is not the general practice. Several elements point to how practices and our conceptions of third-party reproductive technologies are evolving. At the time when the Pratten decision was first heard less than two years ago, the evidence before the court was that Repromed, the only Canadian sperm

Madam Justice Adair largely agreed with Ms. Pratten, and found that donor-conceived adults were discriminated against as compared to adult adoptees, that adult adoptees were an analogous group, and that Ms. Pratten’s section 15 (1)

Charter rights had been violated. Accordingly, Madam Justice Adair ordered that the provisions of British Columbia’s Adoption Act and Adoption Regulation specified by Ms. Pratten5 are unconstitutional and are therefore of no force and effect, giving British Columbia fifteen months in which to revise the legislation. She also granted a permanent injunction prohibiting the destruction, disposal, redaction or transfer out of British Columbia of gamete donor records in British Columbia6. Interestingly, although she specifically held at paragraph 215 that “…based on the whole of the evidence, …using an anonymous gamete donor is harmful to the child, and it is not in the best interests of donor offspring,” Madam Justice Adair did not specifically prohibit anonymous gamete donation (and was not specifically asked to do so, although the Pratten decision is generally referred to as doing so), but instead found British Columbia’s adoption legislation unconstitutionally underinclusive (which would have more or less the same effect). 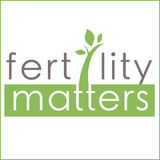