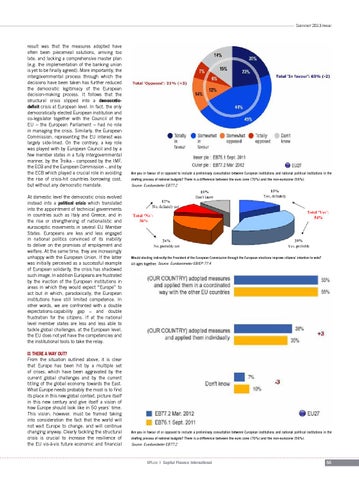 result was that the measures adopted have often been piecemeal solutions, arriving too late, and lacking a comprehensive master plan (e.g. the implementation of the banking union is yet to be finally agreed). More importantly, the intergovernmental process through which the decisions have been taken has further reduced the democratic legitimacy of the European decision-making process. It follows that the structural crisis slipped into a democraticdeficit crisis at European level. In fact, the only democratically elected European institution and co-legislator together with the Council of the EU – the European Parliament – had no role in managing the crisis. Similarly, the European Commission, representing the EU interest was largely side-lined. On the contrary, a key role was played with by European Council and by a few member states in a fully intergovernmental manner, by the Troika - composed by the IMF, the ECB and the European Commission -, and by the ECB which played a crucial role in avoiding the rise of crisis-hit countries borrowing cost, but without any democratic mandate. At domestic level the democratic crisis evolved instead into a political crisis which translated into the appointment of technical governments in countries such as Italy and Greece, and in the rise or strengthening of nationalistic and eurosceptic movements in several EU Member States. Europeans are less and less engaged in national politics convinced of its inability to deliver on the promises of employment and welfare. At the same time, they are increasingly unhappy with the European Union. If the latter was initially perceived as a successful example of European solidarity, the crisis has shadowed such image. In addition Europeans are frustrated by the inaction of the European institutions in areas in which they would expect “Europe” to act but in which, paradoxically, the European institutions have still limited competence. In other words, we are confronted with a double expectations-capability gap – and double frustration for the citizens. If at the national level member states are less and less able to tackle global challenges, at the European level, the EU does not yet have the competencies and the institutional tools to take the relay. Is there a way out? From the situation outlined above, it is clear that Europe has been hit by a multiple set of crises, which have been aggravated by the current global challenges and by the current titling of the global economy towards the East. What Europe needs probably the most is to find its place in this new global context, picture itself in this new century and give itself a vision of how Europe should look like in 50 years’ time. This vision, however, must be framed taking into consideration the fact that the world will not wait Europe to change, and will continue changing anyway. Clearly tackling the structural crisis is crucial to increase the resilience of the EU vis-à-vis future economic and financial

Are you in favour of or opposed to include a preliminary consultation between European institutions and national political institutions in the drafting process of national budgets? There is a difference between the euro zone (70%) and the non-eurozone (56%).

Would electing indirectly the President of the European Commission through the European elections improve citizens’ intention to vote? All ages together. Source: Eurobarometer EB/EP 77.4

Are you in favour of or opposed to include a preliminary consultation between European institutions and national political institutions in the drafting process of national budgets? There is a difference between the euro zone (70%) and the non-eurozone (56%).