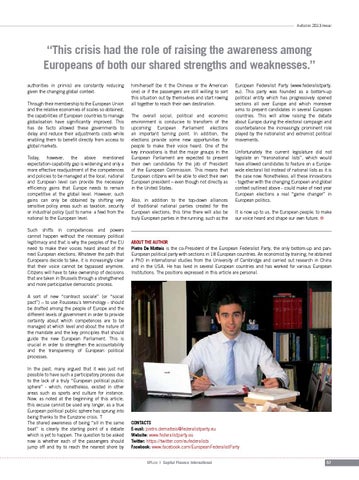 “This crisis had the role of raising the awareness among Europeans of both our shared strengths and weaknesses.” authorities in primis) are constantly reducing given the changing global context. Through their membership to the European Union and the relative economies of scales so obtained, the capabilities of European countries to manage globalisation have significantly improved. This has de facto allowed these governments to delay and reduce their adjustments costs while enabling them to benefit directly from access to global markets. Today, however, the above mentioned expectation-capability gap is widening and only a more effective readjustment of the competences and policies to be managed at the local, national and European level can provide the necessary efficiency gains that Europe needs to remain competitive at the global level. However, such gains can only be obtained by shifting very sensitive policy areas such as taxation, security or industrial policy (just to name a few) from the national to the European level. Such shifts in competences and powers cannot happen without the necessary political legitimacy and that is why the peoples of the EU need to make their voices heard ahead of the next European elections. Whatever the path that Europeans decide to take, it is increasingly clear that their voice cannot be bypassed anymore. Citizens will have to take ownership of decisions that are taken in Brussels through a strengthened and more participative democratic process.

him/herself (be it the Chinese or the American one) or if the passengers are still willing to sort this situation out by themselves and start rowing all together to reach their own destination. The overall social, political and economic environment is conducive to transform of the upcoming European Parliament elections an important turning point. In addition, the elections provide some new opportunities for people to make their voice heard. One of the key innovations is that the major groups in the European Parliament are expected to present their own candidates for the job of President of the European Commission. This means that European citizens will be able to elect their own European president – even though not directly as in the United States. Also, in addition to the top-down alliances of traditional national parties created for the European elections, this time there will also be truly European parties in the running, such as the

European Federalist Party (www.federalistparty. eu). This party was founded as a bottom-up political entity which has progressively opened sections all over Europe and which moreover aims to present candidates in several European countries. This will allow raising the debate about Europe during the electoral campaign and counterbalance the increasingly prominent role played by the nationalist and extremist political movements. Unfortunately the current legislature did not legislate on “transnational lists”, which would have allowed candidates to feature on a Europewide electoral list instead of national lists as it is the case now. Nonetheless, all these innovations - together with the changing European and global context outlined above - could make of next year European elections a real “game changer” in European politics. It is now up to us, the European people, to make our voice heard and shape our own future. i

ABOUT THE AUTHOR Pietro De Matteis is the co-President of the European Federalist Party, the only bottom-up and panEuropean political party with sections in 18 European countries. An economist by training, he obtained a PhD in international studies from the University of Cambridge and carried out research in China and in the USA. He has lived in several European countries and has worked for various European Institutions. The positions expressed in this article are personal.

A sort of new “contract sociale” (or “social pact”) – to use Rousseau’s terminology - should be drafted among the people of Europe and the different levels of government in order to provide certainty about which competences are to be managed at which level and about the nature of the mandate and the key principles that should guide the new European Parliament. This is crucial in order to strengthen the accountability and the transparency of European political processes. In the past, many argued that it was just not possible to have such a participatory process due to the lack of a truly “European political public sphere” - which, nonetheless, existed in other areas such as sports and culture for instance. Now, as noted at the beginning of this article, this excuse cannot be used any longer, as a true European political public sphere has sprung into being thanks to the Eurozone crisis. T The shared awareness of being “all in the same boat” is clearly the starting point of a debate which is yet to happen. The question to be asked now is whether each of the passengers should jump off and try to reach the nearest shore by