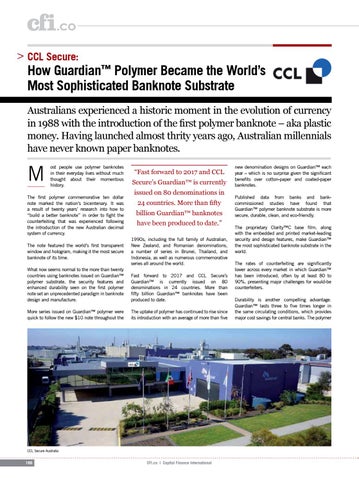 How Guardian™ Polymer Became the World’s Most Sophisticated Banknote Substrate Australians experienced a historic moment in the evolution of currency in 1988 with the introduction of the first polymer banknote – aka plastic money. Having launched almost thrity years ago, Australian millennials have never known paper banknotes.

ost people use polymer banknotes in their everyday lives without much thought about their momentous history.

The first polymer commemorative ten dollar note marked the nation’s bicentenary. It was a result of twenty years’ research into how to “build a better banknote” in order to fight the counterfeiting that was experienced following the introduction of the new Australian decimal system of currency. The note featured the world’s first transparent window and hologram, making it the most secure banknote of its time.

“Fast forward to 2017 and CCL Secure’s Guardian™ is currently issued on 80 denominations in 24 countries. More than fifty billion Guardian™ banknotes have been produced to date.” 1990s, including the full family of Australian, New Zealand, and Romanian denominations, a number of series in Brunei, Thailand, and Indonesia, as well as numerous commemorative series all around the world.

What now seems normal to the more than twenty countries using banknotes issued on Guardian™ polymer substrate, the security features and enhanced durability seen on the first polymer note set an unprecedented paradigm in banknote design and manufacture.

Fast forward to 2017 and CCL Secure’s Guardian™ is currently issued on 80 denominations in 24 countries. More than fifty billion Guardian™ banknotes have been produced to date.

new denomination designs on Guardian™ each year – which is no surprise given the significant benefits over cotton-paper and coated-paper banknotes. Published data from banks and bankcommissioned studies have found that Guardian™ polymer banknote substrate is more secure, durable, clean, and eco-friendly. The proprietary Clarity™C base film, along with the embedded and printed market-leading security and design features, make Guardian™ the most sophisticated banknote substrate in the world. The rates of counterfeiting are significantly lower across every market in which Guardian™ has been introduced, often by at least 80 to 90%, presenting major challenges for would-be counterfeiters. Durability is another compelling advantage. Guardian™ lasts three to five times longer in the same circulating conditions, which provides major cost savings for central banks. The polymer