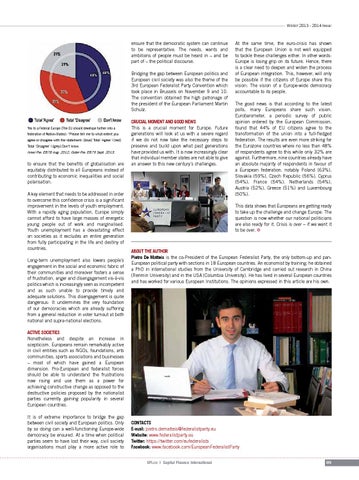 ensure that the democratic system can continue to be representative. The needs, wants and ambitions of people must be heard in – and be part of – the political discourse. Bridging the gap between European politics and European civil society was also the theme of the 3rd European Federalist Party Convention which took place in Brussels on November 9 and 10. The convention obtained the high patronage of the president of the European Parliament Martin Schulz.

Yes to a Federal Europe (The EU should develope further into a federation of Nation-States): “Please tell me to what extent you agree or disagree with the statement: [blue] Total ‘Agree’ | [red] Total ‘Disagree’ | [grey] Don’t know.

to ensure that the benefits of globalisation are equitably distributed to all Europeans instead of contributing to economic inequalities and social polarisation. A key element that needs to be addressed in order to overcome this confidence crisis is a significant improvement in the levels of youth employment. With a rapidly aging population, Europe simply cannot afford to have large masses of energetic young people out of work and marginalised. Youth unemployment has a devastating effect on societies as it excludes an entire generation from fully participating in the life and destiny of countries. Long-term unemployment also lowers people’s engagement in the social and economic fabric of their communities and moreover fosters a sense of frustration, anger and disengagement vis-à-vis politics which is increasingly seen as incompetent and as such unable to provide timely and adequate solutions. This disengagement is quite dangerous: It undermines the very foundation of our democracies which are already suffering from a general reduction in voter turnout at both national and supra-national elections.

CRUCIAL MOMENT AND GOOD NEWS This is a crucial moment for Europe. Future generations will look at us with a severe regard if we do not now take the necessary steps to preserve and build upon what past generations have provided us with. It is now increasingly clear that individual member states are not able to give an answer to this new century’s challenges.

At the same time, the euro-crisis has shown that the European Union is not well equipped to tackle these challenges either. In other words: Europe is losing grip on its future. Hence, there is a clear need to deepen and widen the process of European integration. This, however, will only be possible if the citizens of Europe share this vision: The vision of a Europe-wide democracy accountable to its people. The good news is that according to the latest polls, many Europeans share such vision. Eurobarometer, a periodic survey of public opinion ordered by the European Commission, found that 44% of EU citizens agree to the transformation of the union into a full-fledged federation. The results are even more striking for the Eurozone countries where no less than 48% of respondents agree to this while only 32% are against. Furthermore, nine countries already have an absolute majority of respondents in favour of a European federation, notably Poland (63%), Slovakia (59%), Czech Republic (56%), Cyprus (54%), France (54%), Netherlands (54%), Austria (52%), Greece (51%) and Luxembourg (50%). This data shows that Europeans are getting ready to take up the challenge and change Europe. The question is now whether our national politicians are also ready for it. Crisis is over – if we want it to be over. i

ABOUT THE AUTHOR Pietro De Matteis is the co-President of the European Federalist Party, the only bottom-up and panEuropean political party with sections in 18 European countries. An economist by training, he obtained a PhD in international studies from the University of Cambridge and carried out research in China (Renmin University) and in the USA (Columbia University). He has lived in several European countries and has worked for various European Institutions. The opinions expressed in this article are his own.

ACTIVE SOCIETIES Nonetheless and despite an increase in scepticism, Europeans remain remarkably active in civil entities such as NGOs, foundations, arts communities, sports associations and businesses – most of which have gained a European dimension. Pro-European and federalist forces should be able to understand the frustrations now rising and use them as a power for achieving constructive change as opposed to the destructive policies proposed by the nationalist parties currently gaining popularity in several European countries. It is of extreme importance to bridge the gap between civil society and European politics. Only by so doing can a well-functioning Europe-wide democracy be ensured. At a time when political parties seem to have lost their way, civil society organisations must play a more active role to