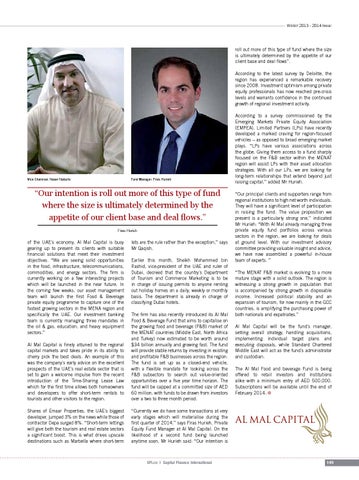 roll out more of this type of fund where the size is ultimately determined by the appetite of our client base and deal flows”. According to the latest survey by Deloitte, the region has experienced a remarkable recovery since 2008. Investment optimism among private equity professionals has now reached pre-crisis levels and warrants confidence in the continued growth of regional investment activity.

“Our intention is roll out more of this type of fund where the size is ultimately determined by the appetite of our client base and deal flows.” Firas Hurieh

of the UAE’s economy, Al Mal Capital is busy gearing up to present its clients with suitable financial solutions that meet their investment objectives. “We are seeing solid opportunities in the food, infrastructure, telecommunications, commodities, and energy sectors. The firm is currently working on a few interesting projects which will be launched in the near future. In the coming few weeks, our asset management team will launch the first Food & Beverage private equity programme to capture one of the fastest growing sectors in the MENA region and specifically the UAE. Our investment banking team is currently managing three mandates in the oil & gas, education, and heavy equipment sectors.”

lets are the rule rather than the exception,” says Mr Qaqish. Earlier this month, Sheikh Mohammed bin Rashid, vice-president of the UAE and ruler of Dubai, decreed that the country’s Department of Tourism and Commerce Marketing is to be in charge of issuing permits to anyone renting out holiday homes on a daily, weekly or monthly basis. The department is already in charge of classifying Dubai hotels.

Al Mal Capital is finely attuned to the regional capital markets and takes pride in its ability to cherry pick the best deals. An example of this was the company’s early advice on the excellent prospects of the UAE’s real estate sector that is set to gain a welcome impulse from the recent introduction of the Time-Sharing Lease Law which for the first time allows both homeowners and developers to offer short-term rentals to tourists and other visitors to the region.

The firm has also recently introduced its Al Mal Food & Beverage Fund that aims to capitalise on the growing food and beverage (F&B) market of the MENAT countries (Middle East, North Africa and Turkey) now estimated to be worth around $34 billion annually and growing fast. The fund will provide stable returns by investing in existing and profitable F&B businesses across the region. The fund is set up as a closed-end vehicle, with a flexible mandate for looking across the F&B subsectors to search out value-oriented opportunities over a five year time horizon. The fund will be capped at a committed size of AED 60 million, with funds to be drawn from investors over a two to three month period.

Shares of Emaar Properties, the UAE’s biggest developer, jumped 3% on the news while those of contractor Depa surged 8%. “Short-term lettings will give both the tourism and real estate sectors a significant boost. This is what drives upscale destinations such as Marbella where short-term

“Currently we do have some transactions at very early stages which will materialise during the first quarter of 2014,” says Firas Hurieh, Private Equity Fund Manager at Al Mal Capital. On the likelihood of a second fund being launched anytime soon, Mr Hurieh said: “Our intention is

According to a survey commissioned by the Emerging Markets Private Equity Association (EMPEA), Limited Partners (LPs) have recently developed a marked craving for region-focused vehicles – as opposed to broad emerging market plays. “LPs have various associations across the globe. Giving them access to a fund sharply focused on the F&B sector within the MENAT region will assist LPs with their asset allocation strategies. With all our LPs, we are looking for long-term relationships that extend beyond just raising capital,” added Mr Hurieh. “Our principal clients and supporters range from regional institutions to high net worth individuals. They will have a significant level of participation in raising the fund. The value proposition we present is a particularly strong one,” indicated Mr Hurieh: “With Al Mal already managing three private equity fund portfolios across various sectors in the region, we are looking for deals at ground level. With our investment advisory committee providing valuable insight and advice, we have now assembled a powerful in-house team of experts. ” “The MENAT F&B market is evolving to a more mature stage with a solid outlook. The region is witnessing a strong growth in population that is accompanied by strong growth in disposable income. Increased political stability and an expansion of tourism, for now mainly in the GCC countries, is amplifying the purchasing power of both nationals and expatriates.” Al Mal Capital will be the fund’s manager, setting overall strategy, handling acquisitions, implementing individual target plans and executing disposals, while Standard Chartered Middle East will act as the fund’s administrator and custodian. The Al Mal Food and beverage Fund is being offered to retail investors and institutions alike with a minimum entry of AED 500,000. Subscriptions will be available until the end of February 2014. i