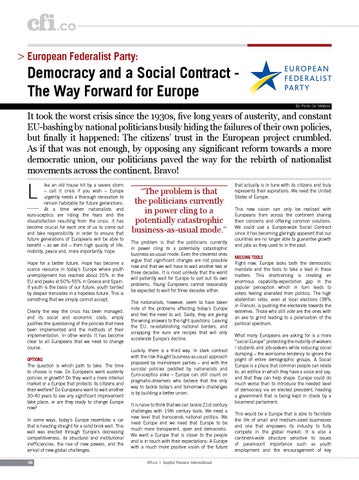 Democracy and a Social Contract The Way Forward for Europe

It took the worst crisis since the 1930s, five long years of austerity, and constant PARTI EU-bashing by national politicians busily hiding the failures of their own FE DEpolicies, RALISTE but finally it happened: The citizens’ trust in the European project E Ucrumbled. ROP ÉEN As if that was not enough, by opposing any significant reform towards a more democratic union, our politicians paved the way for the rebirth of nationalist movements across the continent. Bravo!

ike an old house hit by a severe storm – call it crisis if you wish – Europe urgently needs a thorough renovation to remain habitable for future generations. At a time when nationalists and euro-sceptics are riding the fears and the dissatisfaction resulting from the crisis, it has become crucial for each one of us to come out and take responsibility in order to ensure that future generations of Europeans will be able to benefit – as we did – from high quality of life, mobility, peace and, more importantly, hope. Hope for a better future. Hope has become a scarce resource in today’s Europe where youth unemployment has reached about 25% in the EU and peaks at 50%-55% in Greece and Spain. If youth is the basis of our future, youth tainted by despair translates in a hopeless future. This is something that we simply cannot accept. Clearly the way the crisis has been managed, and its social and economic costs, amply justifies the questioning of the policies that have been implemented and the methods of their implementation. In other words: It has become clear to all Europeans that we need to change course. OPTIONS The question is which path to take. The time to choose is now. Do Europeans want austerity policies or growth? Do they want a mere internal market or a Europe that protects its citizens and their welfare? Do Europeans want to wait another 30-40 years to see any significant improvement take place, or are they ready to change Europe now? In some ways, today’s Europe resembles a car that is heading straight for a solid brick wall. This wall was erected through Europe’s decreasing competitiveness, its structural and institutional inefficiencies, the rise of new powers, and the arrival of new global challenges. 58

“The problem is that the politicians currently in power cling to a potentially catastrophic business-as-usual mode.” The problem is that the politicians currently in power cling to a potentially catastrophic business-as-usual mode. Even the cleverest ones argue that significant changes are not possible now and that we will have to wait another two or three decades. It is most unlikely that the world will patiently wait for Europe to sort out its own problems. Young Europeans cannot reasonably be expected to wait for three decades either. The nationalists, however, seem to have taken note of the problems affecting today’s Europe and feel the need to act. Sadly, they are giving the wrong answers to the right questions. Leaving the EU, re-establishing national borders, and scrapping the euro are recipes that will only accelerate Europe’s decline. Luckily, there is a third way. In stark contrast with the risk-fraught business-as-usual approach proposed by mainstream parties – and with the suicidal policies peddled by nationalists and Euro-sceptics alike – Europe can still count on pragmatic-dreamers who believe that the only way to tackle today’s and tomorrow’s challenges is by building a better union. It is naïve to think that we can tackle 21st century challenges with 19th century tools. We need a new level that transcends national politics. We need Europe and we need that Europe to be much more transparent, open and democratic. We want a Europe that is closer to the people and is in touch with their expectations: A Europe with a much more positive vision of the future CFI.co | Capital Finance International

that actually is in tune with its citizens and truly represents their aspirations. We need the United States of Europe. This new vision can only be realised with Europeans from across the continent sharing their concerns and offering common solutions. We could use a Europe-wide Social Contract since it has becoming glaringly apparent that our countries are no longer able to guarantee growth and jobs as they used to in the past.

MISSING TOOLS Right now, Europe lacks both the democratic mandate and the tools to take a lead in these matters. This shortcoming is creating an enormous capability-expectation gap in the popular perception which in turn leads to voters feeling alienated from politics. The high abstention rates, even at local elections (38% in France), is pushing the electorate towards the extremes. Those who still vote are the ones with an axe to grind leading to a polarisation of the political spectrum. What many Europeans are asking for is a more “social Europe” protecting the mobility of workers / students and job-seekers while reducing social dumping – the worrisome tendency to ignore the plight of entire demographic groups. A Social Europe is a place that common people can relate to, an edifice in which they have a voice and say, and that they can help shape. Europe could do much worse than to introduce the needed level of democracy via an elected president, heading a government that is being kept in check by a bicameral parliament. This would be a Europe that is able to facilitate the life of small and medium-sized businesses and one that empowers its industry to fully compete in the global market. It is also a continent-wide structure sensitive to issues of paramount importance such as youth employment and the encouragement of key