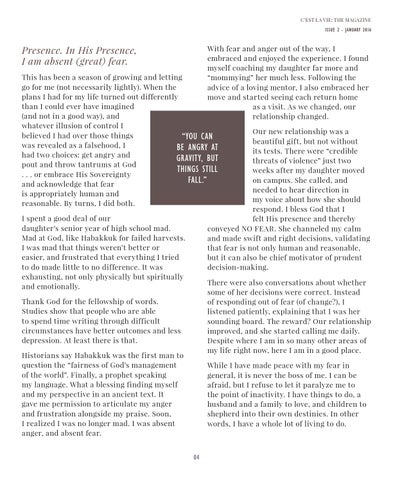 Presence. In His Presence, I am absent (great) fear.

With fear and anger out of the way, I embraced and enjoyed the experience. I found myself coaching my daughter far more and “mommying” her much less. Following the advice of a loving mentor, I also embraced her move and started seeing each return home as a visit. As we changed, our relationship changed.

This has been a season of growing and letting go for me (not necessarily lightly). When the plans I had for my life turned out differently than I could ever have imagined (and not in a good way), and whatever illusion of control I believed I had over those things “YOU CAN was revealed as a falsehood, I BE ANGRY AT had two choices: get angry and GRAVITY, BUT pout and throw tantrums at God THINGS STILL . . . or embrace His Sovereignty FALL.” and acknowledge that fear is appropriately human and reasonable. By turns, I did both.

Our new relationship was a beautiful gift, but not without its tests. There were “credible threats of violence” just two weeks after my daughter moved on campus. She called, and needed to hear direction in my voice about how she should respond. I bless God that I felt His presence and thereby conveyed NO FEAR. She channeled my calm and made swift and right decisions, validating that fear is not only human and reasonable, but it can also be chief motivator of prudent decision-making.

I spent a good deal of our daughter’s senior year of high school mad. Mad at God, like Habakkuk for failed harvests. I was mad that things weren’t better or easier, and frustrated that everything I tried to do made little to no difference. It was exhausting, not only physically but spiritually and emotionally.

There were also conversations about whether some of her decisions were correct. Instead of responding out of fear (of change?), I listened patiently, explaining that I was her sounding board. The reward? Our relationship improved, and she started calling me daily. Despite where I am in so many other areas of my life right now, here I am in a good place.

Thank God for the fellowship of words. Studies show that people who are able to spend time writing through difficult circumstances have better outcomes and less depression. At least there is that. Historians say Habakkuk was the first man to question the “fairness of God’s management of the world”. Finally, a prophet speaking my language. What a blessing finding myself and my perspective in an ancient text. It gave me permission to articulate my anger and frustration alongside my praise. Soon, I realized I was no longer mad. I was absent anger, and absent fear.

While I have made peace with my fear in general, it is never the boss of me. I can be afraid, but I refuse to let it paralyze me to the point of inactivity. I have things to do, a husband and a family to love, and children to shepherd into their own destinies. In other words, I have a whole lot of living to do.

Serving as a virtual hostel, C'est La Vie: The Magazine seeks to serve as a place of refuge, a safe respite for fellow sojourners. Our commitment is to provide nourishment and shelter through a bounty of love and acceptance. A sprawling declaration of real worship through raw, gritty, undisputed, fully-human storytelling, C'est La Vie celebrates no-limits grace that frees and unleashes all of us to unwrap life, as it is . . . and ourselves, as we are. 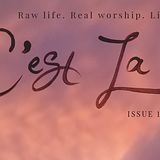