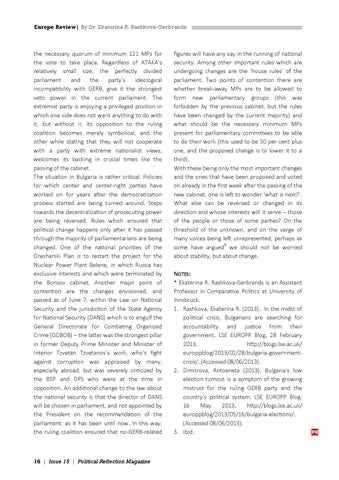 the necessary quorum of minimum 121 MPs for the vote to take place. Regardless of ATAKA’s relatively small size, the perfectly divided parliament and the party’s ideological incompatibility with GERB, give it the strongest veto power in the current parliament. The extremist party is enjoying a privileged position in which one side does not want anything to do with it, but without it, its opposition to the ruling coalition becomes merely symbolical, and the other while stating that they will not cooperate with a party with extreme nationalist views, welcomes its backing in crucial times like the passing of the cabinet. The situation in Bulgaria is rather critical. Policies for which center and center-right parties have worked on for years after the democratization process started are being turned around. Steps towards the decentralization of prosecuting power are being reversed. Rules which ensured that political change happens only after it has passed through the majority of parliamentarians are being changed. One of the national priorities of the Oresharski Plan is to restart the project for the Nuclear Power Plant Belene, in which Russia has exclusive interests and which were terminated by the Borisov cabinet. Another major point of contention are the changes envisioned, and passed as of June 7, within the Law on National Security and the jurisdiction of the State Agency for National Security (DANS) which is to engulf the General Directorate for Combating Organized Crime (GDBOB) – the latter was the strongest pillar in former Deputy Prime Minister and Minister of Interior Tzvetan Tzvetanov’s work, who’s fight against corruption was appraised by many, especially abroad, but was severely criticized by the BSP and DPS who were at the time in opposition. An additional change to the law about the national security is that the director of DANS will be chosen in parliament, and not appointed by the President on the recommendation of the parliament, as it has been until now. In this way, the ruling coalition ensured that no-GERB-related

figures will have any say in the running of national security. Among other important rules which are undergoing changes are the ‘house rules’ of the parliament. Two points of contention there are whether break-away MPs are to be allowed to form new parliamentary groups (this was forbidden by the previous cabinet, but the rules have been changed by the current majority) and what should be the necessary minimum MPs present for parliamentary committees to be able to do their work (this used to be 50 per cent plus one, and the proposed change is to lower it to a third). With these being only the most important changes and the ones that have been proposed and voted on already in the first week after the passing of the new cabinet, one is left to wonder ‘what is next?’. What else can be reversed or changed in its direction and whose interests will it serve – those of the people or those of some parties? On the threshold of the unknown, and on the verge of many voices being left unrepresented, perhaps as some have argued3 we should not be worried about stability, but about change. Notes: * Ekaterina R. Rashkova-Gerbrands is an Assistant Professor in Comparative Politics at University of Innsbruck. 1. Rashkova, Ekaterina R. (2013). In the midst of political crisis, Bulgarians are searching for accountability and justice from their government. LSE EUROPP Blog. 28 February 2013. http://blogs.lse.ac.uk/ europpblog/2013/02/28/bulgaria-governmentcrisis/. (Accessed 08/06/2013). 2. Dimitrova, Antoaneta (2013). Bulgaria’s low election turnout is a symptom of the growing mistrust for the ruling GERB party and the country’s political system. LSE EUROPP Blog. 16 May 2013. http://blogs.lse.ac.uk/ europpblog/2013/05/16/bulgaria-elections/. (Accessed 08/06/2013). 3. Ibid. 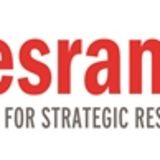 Political Reflection is a quarterly news-Magazine founded in 2010 by Ozgur Tufekci and owned by CESRAN (Centre for Strategic Research and An...

Political Reflection is a quarterly news-Magazine founded in 2010 by Ozgur Tufekci and owned by CESRAN (Centre for Strategic Research and An...