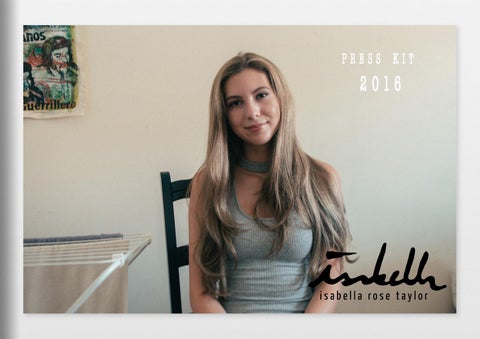 WELCOME Welcome to my press kit. Please use this as a resource to learn more about my story, my clothing line and my art. For questions, inquiries, bookings or interviews, please refer to the contact page. Sincerely, Bella

what other are saying

about 15 year-old artist and fashion designer Isabella Rose Taylor started designing and creating clothes when she was nine years old. A lifelong passion for art and design led her to incorporate art into her prints, and in 2012 she launched her first clothing collection online. That same year she had her first runway show during Austin Fashion Week. The same event went on to honor her as a “Rising Star” the following year. Isabella continued to produce two collections yearly, capturing the media’s attention. By 2014, she had become the youngest person ever to be selected as an Emerging Designer during WWD-MAGIC in Las Vegas; to sell her collection to Nordstrom and to feature a runway show during New York Fashion Week, earning rave reviews.

Isabella’s entrepreneurial spirit has been recognized in numerous ways. She was inducted into the selective Dell’s Women’s Entrepreneur Network (DWEN), and in January 2015, The National Retail Federation (NRF) Foundation named her as one of 25 individuals “Shaping Retail’s Future”, honoring her with their “Dreamer” award. Isabella has made Latina magazine’s “30 under 30” list, and more recently, Fast Company magazine included her in their prestigious list of the 100 most creative people in business. A seasoned public speaker with multiple national TV appearances, Isabella has been a featured speaker at TEDxHollywood, TEDx Janpath in New Delhi, India, and PechaKu-cha Austin.

Isabella continues to pursue her passion for painting and sells her works at Kristy Stubbs Gallery in Dallas as well as through private inquiries. Her fashion brand is a natural extension of her love of art, and for her, the two are inextricably connected. A Mensan, Isabella finished high school at age 11, and after spending two years studying fine arts at Austin Community College, she enrolled at Parsons School of Design in New York, where she currently pursues a degree in Fash-ion Marketing. Isabella’s interests include growing her clothing line into a global life-style brand, continuing to collaborate with and promote other brands she loves, working and networking with creative and talented people as well as inspiring other young people to achieve their full potential and to “dream big”.

Facts Isabella was born March 24th, 2001 in Houston, TX. She lives in Austin, TX with her father, Cesar Taylor and her mother, Sherri Taylor. Her mother is Canadi-

an and her father is from Mexico. Even though she is a little rusty, Spanish was

her first language. Isabella started painting at the age of three. She is a member

of Mensa, a high IQ society and finished high school when she was 11 years old.

•Youngest designer to have her clothing line in Nordstrom

•Youngest designer to present a collection during NY Fashion

then enrolled at Parsons, where she currently studies Fashion Marketing. She has made the Dean’s list with a cummulative GPA of 3.97.

•Selected as one of nineteen “Emerging Designers”,

•“Something Out of Nothing”, TEDx Janpath, New Delhi, India,

•Selected as one of Fast Company Magazine’s “100 Most Creative People in Business for 2015”, May 2015 •Emerging Woman-Owned Business of the year, Texas Governor’s Office, 2015 •Entrepreneurial Rising Star, the Austin Chamber of Commerce, May 2016

BRAND STATEMENT My latest collection is all about easy wearing and effortless style based in neutral colors for the everyday uniform. In this collection, simple, purposeful placement of lines and linear separation of graphics as well as upcycled workwear serve as a study of what this everyday uniform can be. My mission is to make clothes that start conversations and celebrate creativity. Bella

What others are saying... MARA SCHIAVOCAMPO OF THE TODAY SHOW “Isabella Rose Taylor. Haven’t heard that name yet? Chances are that someday you will... at just eight, she started designing and sewing clothes, developing a clothing line that’s now getting noticed by major players in the industry.” TAMRON HALL OF MSNBC NEWS NATION “What I just adore about you, many things, but here you are in the fashion world, which I think a lot of people who consider themselves smarty pants would say, ‘oh, she’s caught up in fashion’, and then you get the one-two punch of saying, she’s twelve and a freshman in college!” STEVE HARVEY “[Isabella Rose Taylor] is turning heads all over the fashion world.” JEANNIE MAI, FASHION PERSONALITY “I’m just blown away by how such talent can be in this beautiful, tiny, little smile and such a whimsical imagination.” KRISTIN DANGL, COSTUME DESIGNER for NICKELODEON’S “SAM AND CAT” “I am so impressed with this young lady!!! Good for her. What a little maverick!” “The Clothes are lovely and the quality is amazing. What a great young lady!!”

GAYLE KING OF CBS THIS MORNING “Isabella Taylor, so poised, wise beyond her years!” GERY STENGEL FOR FORBES MAGAZINE “Move over Diane von Fürstenberg. There’s a new kid on the block! Not to worry Diane, you’re still tops with women who are looking for a sophisticated look. However, when it comes to inspiring girls to become entrepreneurs, Isabella Rose Taylor may have you beat. She certainly has Mark Zuckerberg beat... She isn’t just an inspiration to girls but also to women.” KEEP AUSTIN STYLISH “The night started off strong with 12 year old local Austin designer, Isabella Rose Taylor, stealing the night. I’m sorry, but all the other designers who showed on Wednesday are just going to have to come to terms with the fact that they were outdone by a 12 year old.” YNN NEWS “A young designer is proving that talent trumps age when it comes to fashion.” THE AUSTINIST “The young designer impressed the most finicky and detail-oriented fashion bloggers in the audience with her youthful, edgy, and hip collection. The praise turned into astonishment as the audience realized Taylor’s young age.”

JENNIFER JACKSON, CMO KIDS &amp; BP NORDSTROM “Isabella has the unique ability to create fun, stylish clothes that really represent her customer.” LATINA “When Taylor couldn’t find clothes she liked, she took matters into her own hands and created her own fashion company.” KATE ROGERS for CNBC “At age 14 Isabella Rose Taylor is one of Austin’s rising small business stars.” CESAR GALINDO, DESIGNER “This brilliant little star here next to me reminds me of me when I was a kid.” AUSTIN WOMAN MAGAZINE “[Taylor] wowed Austin fashionistas with a collection of smart, elegant clothing for the thinking tween.” FOX7 NEWS “She’s barely a teenager and already inspiring others not to wait, but to pursue their dreams, now.” PATRICIA WOOSTER, AUTHOR AND BLOGGER Designing clothes and creating paintings is not just something [Isabella Rose Taylor ] “does”. It’s something she does in a really amazing way.”

“If art had legs, it would be fashion” 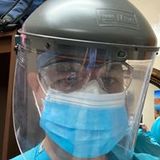